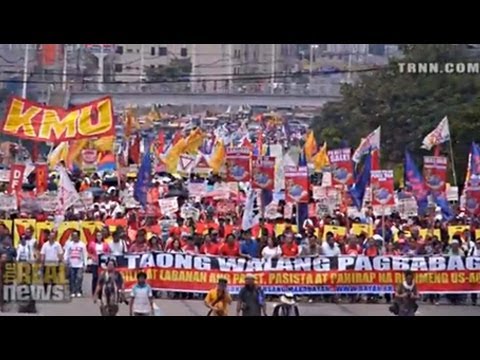 DIAN RUIZ, PRODUCER: Thousands of people took to the streets when the president of the Philippines delivered his fourth State of the Nation Address. They decry the president’s failure to address the widespread poverty, corruption, and human rights abuses.

I’m here at the People’s State of the Nation March against President Benigno Aquino III in Manila, Philippines. They are saying that within the three years since he’s taken office there has been no change.

The protesters marched along one side of Commonwealth Avenue, a 15-lane wide highway that leads towards the site of the president’s speech at the Batasang Complex, home to the House of Representatives. Some protesters toppled a section of the razor wire fence put up to divide the street. The procession began to pour onto the other side of Commonwealth Avenue in an attempt to bypass the barricades set up to prevent the march from getting close to the president. They rushed into oncoming traffic and soon went head to head with a line of police.

The march has now stopped at Commonwealth Avenue, where there’s a standoff between the police and the protesters. This car was initially [incompr.] for cars. And now they’re trying to go through. There’s been–there’s probably about 40 deep on that side of police. And this side, the protest march is the entire procession of the march. And they are waiting to see now what will happen between the march and the police.

It wasn’t long after that the police sent reinforcements. They blocked off the road with a line of trucks and a hose ready as they advanced on the protesters. The chairperson of an international advocacy group for Filipino migrants was among those hurt in the confrontation with police.

GARRY MARTINEZ, MIGRANTE INTERNATIONAL, CHAIRPERSON: During the negotiation, we are still waiting for the result. When the police move and try to arrest me, while they are holding my hands, some of the policeman hit me at the back with their shields and truncheons. That was very painful, and that is a very violent dispersal, because that was the agreement. We are waiting for the result of the negotiation. But in another three minutes, the police moved and hitting our people.

RUIZ: Martinez wasn’t the only person we saw hurt. Many peasants leaders in the front lines were struck by truncheons or crushed in the advance.

Just before the march, we interviewed the director of the National Capital Region Police. He said that despite not having a permit, the police are allowing the protesters to hold the annual rally.

CHIEF SUPERINTENDENT MARCELO GARBO, REGIONAL DIRECTOR, NATIONAL CAPITOL REGION POLICE OFFICE: They were not given permit by the government of Quezon City. And despite that, we will be more flexible. We are open to them. In fact, we will allow them to be at the Ever Gotesco, which is the traditional place where the rallies are holding their rallies during SONA.

RUIZ: The police greeted the march with symbols of peace. But soon after, they were greeted with truncheons, shields, and a water hose.

Three-time former congresswoman Lisa Maza, who represents the GABRIELA Women’s Party, criticized both the police and the president in her remarks to reporters.

LIZA MAZA, FMR. CONGRESSWOMAN, PRESIDENT OF GABRIELA WOMEN’S PARTY (SUBTITLED TRANSL.): We will continue to shout out the problems of our citizenry pertaining to no housing, high prices of commodities. There are no jobs and poverty. This is what the government should solve. We don’t want any more bullshit. We are condemning that earlier they were using women by giving out flowers and balloons so that we would stop our protest. We will not take any more of the president’s bullshit, because we know how they use force against the poor.

RUIZ: There is extreme mistrust among the activists against the government because of a record of human rights violations and crackdowns on dissent that continue under Aquino. The human rights organization Karapatan documented 142 extrajudicial killings, and nearly 300 community organizers and activists were legally imprisoned since he took office.

Angie Ipong was an organizer for peasant farmers when she was arrested in 2005.

ANGIE IPONG, SECRETARY GENERAL, SELDA: I’ve been a political prisoner for six years, and I have experienced torture at the hands of the military. And that’s why when I was out, I was dismissed from all my charges. I told myself I must join the ranks again to be able to fight this unjust system.

RUIZ: One of the main points of the president’s nearly two-hour speech that coincided with the rally was inclusive growth. He said this is a principle that drives every initiative, action, and decision of his administration. This spring, the Philippines surpassed China as the fastest growing economy in Asia. However, the gap between the rich and the poor in the country is also the worst in Asia. According to a socioeconomic research organization, IBON, the top 40 richest Filipino individuals hoard over 20 percent of the wealth of the entire Philippine economy. The government statistics say that one in four Filipinos live on less than one U.S. dollar a day.

RUIZ: The general secretary of an international solidarity group supporting Philippine human rights was among the dozens of foreigners participating in the rally.

MALCOLM GUY, GEN. SECRETARY, INT’L LEAGUE OF PEOPLE’S STRUGGLES: This time they were able to organize a huge contingent here to the demonstration of non-Filipinos. And I think that’s–for me, in the 25 years I’ve been coming here, that’s the biggest number we’ve seen.

NATALIE AGOSTO, NEW YORK COMMITTEE FOR HUMAN RIGHTS IN THE PHILIPPINES: It was massive support from internationally, from around here. You saw all the sectors coming out. I’ve never seen anything like it. Super organized. You know, the masses really came out and really made their voice heard.

RUIZ: The crowd burned the effigy, chanting that the president is a puppet for the U.S. Many of the protesters are against the increasing U.S. military presence in the Philippines and foreign-owned mines and plantations that are wreaking havoc on the environment and local communities. Protests around the country and the world among the estimated 12 million overseas Filipinos are traditionally held in solidarity with this rally in Manila.

This is Dian Ruiz for The Real News Network.

February 19, 2020
Sign Up for Our Newsletter
Help Us Make Real News!