Will the US Military’s “Asia Pivot” Escalate Human Rights Violations? 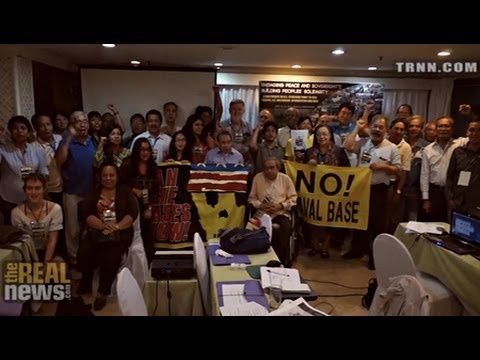 DYAN RUIZ, PRODUCER: Leaders of organizations opposed to U.S. military presence from throughout Asia and around the world met at a Conference in Manila, Philippines, this summer.

CONFERENCE DELEGATES: The people united will never be defeated!

RUIZ: They say the U.S. military is responsible for grave human rights violations and environmental destruction that go unpunished.

The International Conference on the U.S. Pivot to Asia-Pacific, U.S. Militarism, Intervention and War was attended by nearly 60 delegates from 13 countries, such as South Korea, Japan, Australia, and the Philippines. The secretary general of Bayan, a Philippine progressive political organization and a lead organizer of the conference, was among those who decried this newest wave of U.S. militarization of Asia.

RENATO REYES JR., BAYAN SECRETARY GENERAL: It’s high time that the people in Asia be allowed to determine their own course and to chart own direction and their own foreign policy free from any dictates of the United States.

RUIZ: Despite the support of their own respective governments, the delegates see U.S. military intervention as a violation of their countries’ sovereignty. Every Philippine administration has been beholden to the U.S. and permits their military presence, despite a prohibition in the Philippine Constitution. The current President Benigno Aquino administration is no different.

BARACK OBAMA, U.S. PRESIDENT: … engage in training together, work on a range of regional issues together, all of which is consistent with the announced pivot by the United States back to Asia, and reminding everybody that in fact the United States considers itself and is a Pacific power.

RUIZ: Many see the U.S. military’s shift of forces to Asia as a counter to China’s growth as a world power both economically and militarily. Threats from North Korea also come into play. The U.S. plans include sending 70,000 troops to the Asia-Pacific region and 60 percent of the U.S. Navy. And of course, economic interests are also at the forefront of the U.S. pivot.

When former secretary of state Hillary Clinton announced the “pivot” to Asia she said, “Harnessing Asia’s growth and dynamism is central to American economic and strategic interests” and is a “key priority for President Obama.”

U.S. military presence is an entrenched part of Philippine history. In 1898, the Philippines became a U.S. territory and remained so for decades.

MAJ. DANTE SIMBULAN, ARMED FORCES OF THE PHILIPPINES: When World War II broke out, we were not yet independent. As a colony of the U.S., naturally we were a target of the Japanese.

RUIZ: Manila and other parts of the Philippines were obliterated and an estimated 1 million Filipino civilians died.

Former three-time Philippine congressman and current president for the progressive Bayan-Muna Party, Satur Ocampo, says the U.S. maintained their presence and influence well after they gave the Philippines formal independence in 1946.

SATUR OCAMPO, PRESIDENT BAYAN-MUNA PARTY, FORMER CONGRESSMAN: They retained their colonial domination of the Philippines by maintaining United States bases until 1991. But even after that, they negotiated a Visiting Forces Agreement that enabled them since 2002 to undertake joint military exercises enabling America forces to stay in the Philippines for a short period.

RUIZ: Americans have a history of dodging investigation and prosecution for alleged crimes committed in the Philippines over their 115 years of military presence in the country. Here are some of the most recent abuses.

REYES: What we’ve seen in the past, we had a rape victim back in 2006 where the main suspect was not even put in a Philippine jail despite having been convicted by a local court. And eventually they were able to reverse the ruling and spirited him away back to the United States.

We have a case, a recent case last year of a Filipino fisherman who was killed when his fishing boat was rammed by a U.S. Navy patrol boat, and nobody was held accountable for that because the U.S. merely settled with the family and gave some sort of undisclosed amount.

Then you have a case wherein a Filipino translator was found dead in a facility, in a Philippine facility occupied by American soldiers. And this case is very curious, since the local authorities were saying he committed suicide, but there were suspicions that foul play was involved.

RUIZ: In the past year, the U.S. Navy has been responsible for large-scale environmental destruction. This year, a minesweeper called the USS Guardian was grounded on a protected marine park, severely damaging part of the Tubbataha Reef. Last year, the U.S. Navy was involved in the dumping of toxic waste in Subic Bay near the decommissioned American base.

Being home to U.S. military bases for many years, the Philippines knows all too well how the presence of soldiers impacts women in nearby communities. Sister Mary John, former chairperson of a women’s rights organization, Gabriela, and current chairperson of the Women Crisis Center tells us what she’s seen.

SISTER MARY JOHN MANANZAN, COFOUNDER, GABRIELA & BOT WOMEN CRISIS CENTER: This used to be the rest and recreation center for the American soldiers. I mean, we have seen a lot of prostitution happening, and of course rape, and of course a lot of single mothers left afterwards.

RUIZ: It’s difficult to say how many rapes American soldiers have committed in the Philippines, because nearly all women do not come forward with allegations.

When Americans troops are in the country, they train the Armed Forces of the Philippines. The Philippine military has been involved in hundreds of cases of targeted killings and disappearances of community organizers and activists. This is according to organizations such as Human Rights Watch. Human rights abuses in the Philippines was discussed at an adjoining conference and is something the President of the U.S. National Lawyers Guild wants Americans to bear in mind.

AZADEH SHAHSHAHANI, NATIONAL LAWYERS GUILD PRESIDENT: This is our taxpayer money that’s actively being spent on U.S. military personnel coming here, collaborating with the Philippines’ military in joint military exercises and, you know, possibly some other activities. And this is where, you know, we here at the conference have been learning about grave human rights violations that are being committed to this day, and including torture, disappearances, extra-judicial executions. And it seems that’s there’s complete impunity for the military.

RUIZ: Here are some of the other delegates.

DENIS DOHERTY, NATIONAL COORDINATOR, AUSTRALIAN ANTI-BASES CAMPAIGN COALITION: We want to unite with everyone across the region to oppose military bases. In Australia, we have been fighting against U.S. bases since the ’60s.

SUNG-HEE CHOI, GANGJEONG VILLAGE INTERNATIONAL TEAM, JEJU ISLAND, SOUTH KOREA: So how critical it would be if this war base is built in this small island. It totally destroys people’s lives there, not only environment.

RUIZ: Despite the collateral damage, many support the U.S. military presence in the Philippines and the recent negotiations for more troops. Reasons include China’s rise and claim over an area west of the Philippines. Many believe that if tensions over the disputed waters and islands escalate, the U.S. will be on the side of the Philippines, a notion Renato dismisses.

RUIZ: After over a decade long bloody war on terror in Iraq and Afghanistan, Asia is becoming the new battleground for America’s armies. The U.S. pivot to Asia may be less visible to the American public, but the conference delegates from this region are not blind to its destruction.

This is Dian Ruiz for The Real News Network.