Approved by the state legislature and the governor, in-state tuition for households making under $125,000 a year will be free, but it excludes part-time and undocumented students - people that activist/organizer Denise Romero says ought to be included in the plan

Approved by the state legislature and the governor, in-state tuition for households making under $125,000 a year will be free, but it excludes part-time and undocumented students - people that activist/organizer Denise Romero says ought to be included in the plan 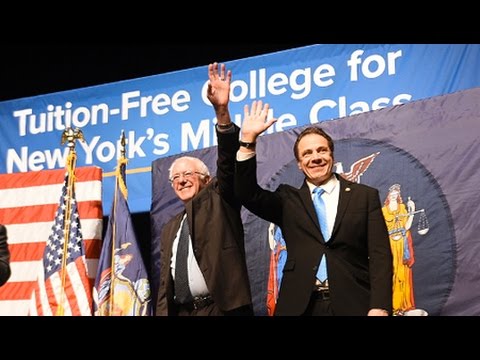 The State Assembly and the Senate passed it in the budget over the weekend and Governor Andrew Cuomo, who proposed the measure back in January, was excited to announce it at the Governor’s office on Monday.

ANDREW CUOMO: In New York, the time has come we should have free public college for people – $125,000 and below. It is… Thank you. First state in the nation and it will change lives. Think about it — 80% of the people in the State of New York qualify.

KIM BROWN: So, families or households with an income of $125,000 a year or less can apply for it, with one of the catches being that students receiving the benefit must remain in the State for as long as they receive the tuition break. Now, while many are cheering this seemingly progressive initiative, others are saying — read the fine print.

To discuss this further, we’re joined today by Denise Romero. Denise is an undocumented student at LaGuardia Community College. She works as a paralegal and a community organizer. She’s also a member of the International Socialist Organization. She joins us today from Queens. Denise, thank you so much for being here.

DENISE ROMERO: Thank you so much for having me.

KIM BROWN: The Excelsior Scholarship as it’s called is going to go into effect this fall and apply to undergraduate students enrolled in CUNY or SUNY schools in (Denise, correct me if I’m saying that wrong) the City of New York State, or State of New York college and university system there — which includes over a million students. So, how is this announcement being received by New Yorkers today?

DENISE ROMERO: Well, most students refer to it as CUNY but that’s close enough. And yes, I think that this is going to have a great effect on all students in different ways. And that’s worth talking about.

You know, when I heard the news, both of the proposal, and this week that it was actually being passed, I was very excited. A lot of my friends benefit from it.

But that excitement very much turned into anger, and disappointment when I read the fine print and saw that not only undocumented students, which make up 4% of the population, but also part-time students, which amounts to more than 84,000 students, we’re talking about people who already face other challenges, to getting to school or finishing their degree, who are essentially being left out and not included in this assistance.

KIM BROWN: And that is very notable, something that people may or may not be aware of. What is not included in Governor Cuomo’s plan is that as you mentioned — undocumented students are not covered. Students must be enrolled in full-time college credits, I believe, 30 hours a semester is the threshold, in order, for students to be covered. And students must remain in the State throughout the entire time that they actually received the tuition break.

So, if you received four years of tuition being covered by the State of New York, then you must remain in the State for that same four years after you’ve received your education. And some are saying that people perhaps, or job opportunities might be limited because if they get a job offer right after school, they can’t exactly leave; unless that money gets converted into a loan, which is laid out in the Governor’s plan.

So, in terms of how this is being rolled out, with New York being the first in the country to do this, I want to go back to January, when Vermont Senator, Bernie Sanders joined Andrew Cuomo in making this proposal as part of his budget. As we know, Bernie Sanders campaigned heavily on this during his 2016 Presidential campaign run there. Let’s take a look at Bernie.

BERNIE SANDERS: State Legislature should follow the Governor’s lead to pass this legislation. Here’s my prediction, if New York State does it this year, mark my words, state after state will follow.

KIM BROWN: With you being a member of the Socialist Organization and Bernie Sanders running as a Democratic Socialist, from your political perspective, what are your thoughts about New York State getting this done?

DENISE ROMERO: Well, you know like I said, I do absolutely think that this is a step in the right direction in that it definitely came out of a growing sentiment or support for the idea of free tuition and giving access to a larger population, you know, everyone really, to higher education.

However, you know I think that, we need to realize that, this isn’t coming out of the same context that Bernie Sanders was proposing this in; which was kind of a bigger platform of, you know, raising taxes on millionaires, of giving more state funding to social services and social infrastructure, including public education, you know, from 12 to K to higher ed.

You know, Cuomo I think is responding to that growing sentiment but the way that this was rolled out was by no means I think what should be the example in other cities. Cuomo very much deciding on the budget. The budget is decided by literally four people sitting in a room; the State Assembly, the State Senate, and a representative of the IDC, with Cuomo deciding on what the budget is going to look like.

And so, you know, the way that this was proposed, and then decided on and rolled out didn’t very much include community input. And you know, we have to be aware that in CUNY there has been a growing and continuous protest and coalitions being formed between students and faculty, especially adjunct professors and tenured professors, you know, that have been trying to bring attention to the tuition hikes that CUNY has been going to. But also, you know, the under-employment of a tenured professors, the low wages that adjunct professors face and overall the lack of funding for the entire system.

Right now, the $3 billion budget that CUNY is working with very much comes from mostly tuition hikes that have been implemented in the last five years. And so, you know, we’re talking about even as this is rolled out, which I think will benefit a lot of people — it will also mean that the population of students is going to increase.

And these students are coming into a severely underfunded public education system and so, those are the kind of questions that are not necessarily being addressed by this program.

And then, you know, with its catches, it’s also going to benefit kind of an exclusive population while putting the burden on students who are already facing a lot of challenges in finishing their education.

KIM BROWN: I wanted to get back to you specifically Denise and being an undocumented college student. And number one, how does the State charge you now for tuition? I know in some states where the Dream Act have their own version of the Dream Act, where it’s passed where undocumented students are charged in-state tuition and other states do it differently.

So, how does the State of New York’s collegiate system deal with undocumented students currently? And how or will this even change under the new proposal and initiative passed by Governor Cuomo and the State Legislature?

So, that means that I am a full-time worker, specifically because I have to pay tuition out of pocket and I don’t have access to State and Federal assistance, or a lot of scholarships that are only open to US citizens.

And so, I think that this program while it is going to benefit a large group of students; also, you know is a bit of a slap in the face to undocumented students, who have been pleading with him to make our student experience somewhat more easy or less difficult.

KIM BROWN: Indeed. We have been speaking with Denise Romero. She is an undocumented student at LaGuardia Community College. She works as a paralegal at a community organizer. She’s also a member of the International Socialist Organization.

We’ve been discussing New York State becoming the first in the country to offer free college tuition to both four-year and two-year university; there’s a number of catches, including that you must be enrolled in school full-time. This is not open to undocumented students, and that is obviously quite problematic. Denise, we appreciate you joining us today. Thank you very much.

DENISE ROMERO: The one thing that I was going to say at last is that if this does become an example for other cities, I think that what really needs to be tackled is, whether there’s a movement that can pressure city and state officials to make sure that these programs are actually reflective of the complex reality that people are living.

You know, when we’re talking about the United States having a lot of issues with low wage and increasing rents in cities where students are trying to get through their college education.

KIM BROWN: Excellent final point. Denise, we appreciate you joining us, thank you.

DENISE ROMERO: Thank you so much.