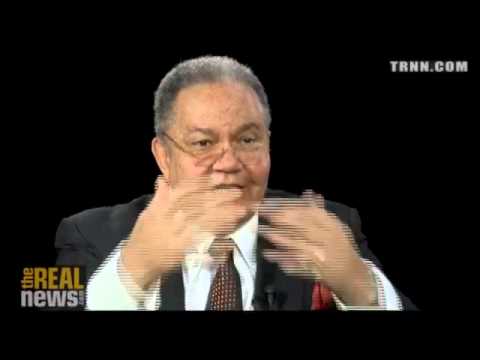 STEPHEN JANIS, PRODUCER, TRNN: Hello. My name is Stephen Janis and I’m an investigative reporter for the Real News Network in Baltimore. Thank you for joining us in our continuing conversation with A. Dwight Pettit, a noted civil rights lawyer who has sued the police department in multiple cases of police brutality. We are discussing today the case in Charleston, South Carolina, where an officer shot a man eight times in the back as he was running away.

Mr. Pettit, thank you for joining us.

A. DWIGHT PETTIT, CIVIL RIGHTS ATTORNEY: Thanks for having me, Stephen.

JANIS: One of the things that you note, and we discuss quite often, is policing is a big business in this town. For a lawyer like you to go against this huge organization, what are the challenges you face when you have a case where someone’s shot in the back, trying to make your case in court?

PETTIT: Well, we have a very, very, very conservative City Solicitor’s Office, in this case. And you know, we’ve had a very conservative State’s Attorney’s Office, and the elections may have just changed that. And so we don’t have much cooperation because we don’t, we can’t expect that there’s going to be a criminal prosecution. In most cases, more cases than not, there’s not going to be a criminal prosecution.

And so that would usually lend itself to us getting some investigatory help from the state, by getting their files, if there is a criminal prosecution. And we have a very conservative City Solicitor’s Office, which just about denies everything in conjunction with the FOP, the Fraternal Order of the Police, and puts everything right at the step of the courtroom. So in most cases, we don’t have any type of investigatory help in terms of city agencies or state agencies.

And so it becomes quite difficult, in terms of getting the evidence through discovery when we bring the suit — because we’re not going to get anything until we bring it. We bring the action, we get discovery, and so forth. We get the autopsy, and those type of things. We have a case now that we’re working on, a young man was beaten to death. Tyrone West. We’ve been fighting for the full autopsy for a year, now.

JANIS: And you still don’t have the autopsy?

PETTIT: We still, we don’t have all of the things that were made up, that went into the autopsy, in terms of their decisions that he was the subject of a heart attack, or some pre-existing condition. And why that’s kept so secret, that’s what we think is possibly part of what will go to the jury when the trial goes forward.

But these things, we have to bring in experts to in fact go against the police experts, who always conclude the same thing: that the shooting, or the killing, was reasonable. So we have a hard ladder to go up, and it’s no question about it.

JANIS: And just so people know, Tyrone West died in police custody, and —

PETTIT: Yeah. In Northeast Baltimore. Beat to death by something like ten to eleven officers. Stomped, Tasered, beat with batons, sticks. Beat with fists. Who basically, they admit that the beating took place. But the City —

JANIS: And they even said they took a break during it, right?

PETTIT: Yes, because he had, he had run a few distance, he was — when he was running up the hill, he was thrown down on his face. According to witnesses he was, you know, “You’ve got me, please stop beating me.” And they beat him until, in fact, he was rendered unconscious.

JANIS: And the officers were not charged in that case.

PETTIT: No. Nobody was charged.

JANIS: Nobody was charged.

PETTIT: Just like you probably remember, the Anderson case. Was a young man —

In many cases I found, believe it or not, that in many cases these officers are promoted. It’s almost like a blue badge of courage that you killed somebody. And so they’re not going to be prosecuted. They are limited in the damages by the cap. And if you get a sizable judgment that some kind of way exceeds the cap, or close to the cap, the city’s going to pick up — according to the FOP agreement — is going to pick up the liability.

So what sanction do you have that you should do the right thing? None.

JANIS: Well, I’m going to ask you a question. How much does this have to do with race? I mean, if the victim, or the person who dies in police custody is African-American, how much harder is it, or is this part of the problem, that this is, you know, sort of a product of racism?

PETTIT: Well, it’s a product of racism but it’s so systemic that it seems to be something that has spread throughout the police departments, both African-Americans as well as white police officers, that — to use the cliché, that black life does not matter. That this is acceptable conduct. That this is something that you will not be prosecuted, nor will you be persecuted. And so therefore it sort of transcends, begins to transcend individual officers in terms of their race, and becomes more or less a policy and procedure, which gives us federal jurisdiction in many cases, of people acting under color of law pursuant to what is legal and authorized and accepted in the police department.

And so the culture has to be changed at the top, from the mayor’s office to the City Solicitor’s Office to the Police Commissioner’s Office. There’s got to be change mentally, and across this nation, that this conduct is not acceptable, and you will, in fact, be disciplined. And that has not been instilled at this point in time.

But everything was rejected as non-acceptable, and that goes back to the state of mind that the public is saying that this conduct is acceptable in tradeoff for the necessary policing that we want in our community. To protect us we’ll give up certain civil rights.

JANIS: And how do you explain that in the African-American community? Because most of these victims, almost all of them, are African-American. Why are they accepting of this type of police misconduct that negatively affects the community here?

PETTIT: Because the African-American community is so, you might say … upset about the – rightfully so — the issue of crime. For example, you see that a lot of folks are saying, well, what about black-on-black crime? That’s a separate issue. Because black-on-black crime, you’re still subject to the penal system, you’re subject to prosecution. What we’re saying, in terms of the police departments, that their crimes are not, in fact, answerable. That they have a pass and have a license to the fact to inflict these criminal acts on the community, and not be subject to any penalty. That’s the main distinction.

But the black community is allowed to, or does in fact sometime blur this because of the apprehension and the fear of such rampant crime in the urban community, that they’re willing to trade off their rights and bringing attention to what racism might be involved in return for what they believe to be adequate policing and protection. Now, you see a break in that now in terms of citizens coming forward in terms of cooperating with the police. Because you can’t cooperate with the police if you’re scared to call the police.

So we see that that is now the embryonic stage of apprehension in the black community with the police department. Where before would, Officer Friendly, that may not have been the case. People would come forward, cooperate, give names, what they saw and what have you. Nowadays, nobody wants to do that because they don’t know how that involves them and how that will be interpreted, or how that mixed relationship with the police department will come back to haunt them.

JANIS: In the case of Michael Johnson, who’s 15 years old, he was taken or kidnapped — was alleged to have been kidnapped from West Baltimore. Taken and dropped off in Howard County without his shoes. You sued, and successfully won. But then there was another — there was another twist to that case in terms of collecting the money that sort of speaks to this problem of police accountability. Could you explain what happened in that case?

PETTIT: Well, in that particular case, the irony and the horror of that case, is not only a young man was taken out to Howard County, he was taken, shoes were taken, cell phone was broken. He was thrown out in the rain, about 15 miles outside of Baltimore City. He was, he called the Howard County police. It was the Howard County police department that brought him back, took a statement and verified everything that took place.

But the horror of the case is that we settled the case with the police department for $150,000. then the mayor and the board of estimates reneged, even after there was a recommendation from the city solicitor’s office to settle it. We went to trial. We got a $500,000 verdict from a jury. The case went up on appeal, which was denied. And now the city is asking the highest court in the state, the court of appeals, to review the case on the issue of whether or not the cap, the court of special appeals, rule that the cap was not applicable to individual police officers if in fact the jury found malice. And in this particular case the jury did find malice.

But that case, it goes, it’s the prime example of the establishment falling in line with this blue badge of, this circle of blue badge in terms of deny everything, concede nothing, and everybody … lie. Cover up. Hide. Instead of, when certain things take place, instead of the administration, the police department, the police commissioner, and the mayor’s office saying okay, this was a bad shooting. Or it’s wrong, let’s prosecute the police department, let’s compensate the families for the damage done to them, we don’t have that mental attitude. Not in this state, and obviously we don’t have it in most of the nation.

JANIS: So, and we talked about this before. You know, you’ve been doing this for almost 42 years. What keeps you going as an attorney fighting these cases, sometimes an uphill battle?

And so when this new monster began to surface its ugly head, it was like I was compelled to continue in this area of litigation and try to undo some of the wrongs that have been done and bring some justice to the community, even though the powers that be stand strongly in opposition to that.

JANIS: Well, I read your book. I highly recommend it. And listen, Mr. Pettit, I really appreciate you talking with us about this. Thank you for coming.

PETTIT: Thanks for having me, Steve. Good to see you.

JANIS: My name is Stephen Janis, I’m an investigative reporter for the Real News Network, reporting from Baltimore. Thank you for joining us.