The Death of Evidence in Canada 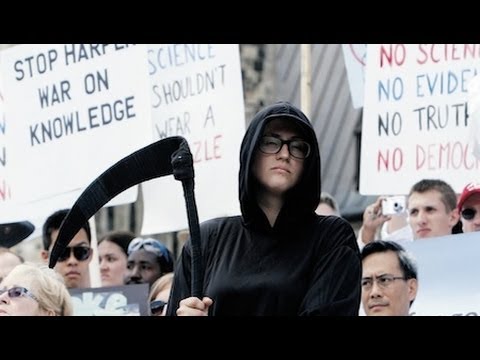 On July 10 in Ottawa, something astounding happenedâ€”2,000 scientists, 2,000 Canadian scientists protesting outside of parliament buildings, talking about the death of evidenceâ€”another way, I guess, to say the death of science under the Harper government.

Now joining us to talk about why they were there and what this issue is about is Diane Orihel. She’s a PhD candidate in ecology at the University of Alberta. She’s currently leading a group called Coalition to Save the ELA, which is a nonpartisan group of scientists and citizens concerned about the future of Canada’s Experimental Lakes Area. And she joins us from Ottawa. Thanks for joining us, Diane.

DIANE ORIHEL, FOUNDER AND LEADER, COALITION TO SAVE ELA: My pleasure.

JAY: So what’s your evidence that Prime Minister Harper doesn’t care about scientific evidence anymore? What drove you and others like you out there?

ORIHEL: The list is a mile long, let me tell you. Well, there’s three main categories. First of all, cuts to federal programs, federal science programs such as the Experimental Lakes Area and the PEARL; muzzling of government scientists unprecedented in our country’s history; and thirdly, changes in legislation that makes science less important to the policies being put forward.

JAY: Well, let’s start with the muzzling one. What’s the evidence that scientists have been muzzled?

ORIHEL: I’ll give you a few different examples. To start with, last year at an international conference, government scientists were followed around by media minders. Each Environment Canada scientist had a media minder that followed them around to check what they’re saying at this international conference. There’s been a number of government scientists that have published their data, their papers, in really high-profile journals and then turned around and told they weren’t allowed to speak about these important findings to the media.

JAY: Well, is that something new? And has that not happened under other governments?

ORIHEL: This is something new. And it’s definitely been degrading over time, but certainly since the Harper government has had a majority, things have gotten a lot worse. Communication is much more censored now. And at the Experimental Lakes Area there’s been attempts by members of Parliament to come visit the site, and those have been declined by the Department of Fisheries and Oceans, which I found astounding.

JAY: Now, you say one of the examples or evidence is the lack of funding for certain programs and even cancellation of certain programs. But the Harper government’s argument is that it’s not so much they’re cutting back as they’re deciding to put the money in different places. And given that Canada is in aâ€”you know, part of a global economic crisis, they want scientific investigation to have a direct effect either on profits and/or creating jobs and that’s where the money should go. I mean, in some ways I think they would argue it’s not about the death of evidence is that they just don’t want evidence or money put into evidence that doesn’t somehow in their view grow the economy. So how do you respond to that?

ORIHEL: Certainly the government is funding science, but what they’re funding is changing. So it’s a shift from basic research towards research that’sâ€”helps industry, so it’s subsidizing industry R&D. And we don’t believe that this is in keeping with what taxpayers in this country necessarily want their science dollars spent on. They should certainly be in part, but it should not be to the complete neglect of basic research.

And secondly, a lot of the research we do, for example, at the Experimental Lakes Area, helps industry. And I think this is something that the government does not understand is that there’s this false dichotomy it’s creating between the environment and the economy. We help, we work with industries at the Experimental Lakes Area. We work with the aquaculture industry toâ€”so that they can develop better management practices for fish farms. We work with the hydroelectric utilities to inform them where they should be putting their hydro reservoirs.

JAY: Well, is this, in terms of the view of the Harper government, kind of an underlying point of view, that now’s not the time for such environmental consciousness or environmental issues, that the issue now is more just sort of expanding production, expanding the economy? I mean, is that where the debate is? At least part of the debate?

JAY: So if your Experimental Lakes Area project is closed down, what do Canadians lose?

ORIHEL: Well, the Experimental Lakes Area is a world-class, a world-renowned program that generates the best information on developing policies to make sure our drinking water is safe, our lakes are clean, and our fish populations are healthy. I know Canadians value water, I know Canadians value fish, and I know they want their tax dollars to go to making sure that those things are there for this generation and future generations.

JAY: Now, this is in Northwestern Ontario, these lakes? Is that right?

ORIHEL: That’s right, 58 lakes located in Northwestern Ontario near the town of Kenora.

JAY: And what has your research shown so far? What would be an example of an achievement?

ORIHEL: One of the major achievements of the ELA was understanding that phosphorus was the nutrient that needed to be controlled in order to control algal blooms in-lake. The ELA was set up because one of the Great Lakes, Lake Erie, was dying. It was being suffocated from a green algal soup. And we did a series of whole ecosystem experiments to understand what’s causing those blooms. And out of that, phosphorus was taken out of detergents and our lakes were covered.

JAY: And this, the research work, came out of this ELA project?

ORIHEL: Absolutely. And another example is acid rain. The pioneering work on acid rain was done at the ELA. What we showed is acid rain from burning coal, when that rains down on the lake, it kills the small animals at the base of the food chain. And this makes fish such as lake trout starve. And this helped to put forward the amendments in the Clean Air Act to control acid rain, and our fish populations recovered because of the work done at the ELA.

JAY: Now, you have not been closed down yet, but you’re worried that you will be, and that’s because of some kind of leak or something?

ORIHEL: No. It’s very, very clear. The government is terminating the Experimental Lakes Area on March 31, 2012. All employees have been given effected letters. And the plan is to mothball the facility in March 2013 if no new operator is found.

JAY: So they want to privatize this?

ORIHEL: Yes, they want to offload this facility onto a university or a foundation or another body.

ORIHEL: They’re going to shut the doors and no research will be done there anymore after 44 years.

JAY: Now, one of the other big issues I know that the scientists versus the Harper government is the whole issue of the Alberta tar sands and what to do with that. I mean, certainly Prime Minister Harper’sâ€”one of his most important bases of support is Alberta, and one of his main finance supports comes out of tar sand money, and the tar sand development is critical to his vision of where the economy goes. But he claims they’reâ€”actually want to put more resources into making the tar sands a safe proposition. So what do you make of that?

JAY: So is itâ€”what is it? He doesn’t like the evidence that’s coming out of this, so if they have a different project, maybe they’ll get different evidence?

ORIHEL: Well, that’s the claim from the department Environment Canada, that the reason that they’re terminating their funding of the ELA is because we haven’t produced theâ€”and I quoteâ€”"anticipated results," with no explanation at all what that means. So, apparently, they don’t like the information that we’re generating.

JAY: Okay. And we’ll ask ministers Ashfield and Kent if they’ll come talk to us. And I’m guessing they won’t, but maybe they’ll put somebody up, and in which case we’ll put some of these questions to them. Thanks very much for joining us, Diane.

ORIHEL: My pleasure, and thank you.

Diane Orihel is a PhD Candidate in Ecology at the University of Alberta. She is currently leading an advocacy organization called the “Coalition to Save ELA” – a nonpartisan group of scientists and citizens concerned about the future of Canada’s Experimental Lakes Area.