Days of Revolt: From the Ghetto to Auschwitz (3/5)

In this episode of teleSUR's Days of Revolt, Chris Hedges continues his discussion with Holocaust survivor Lola Mozes about her time in Auschwitz, and reflects on the importance of love in overcoming evil

In this episode of teleSUR's Days of Revolt, Chris Hedges continues his discussion with Holocaust survivor Lola Mozes about her time in Auschwitz, and reflects on the importance of love in overcoming evil

Days of Revolt: The Ghetto 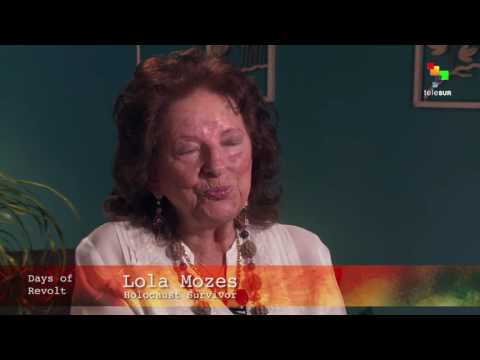 CHRIS HEDGES: Hi. Welcome to Days of Revolt, and part two of my discussion with Lola Mozes who, in the previous section, spoke about enduring the German invasion of Poland, being herded into the ghetto, the loss of her brother and her father, and today we’re going to discuss her experience in Auschwitz and attempt to reflect a little on the nature of human evil. Thank you, Lola.

So, first you go to a work camp, Plaszow, is that correct?

HEDGES: From the ghetto, and the eventually you go into Auschwitz.

MOZES: Then to Pionki, to an ammunition factory from there, with a special letter sent to Auschwitz, and I don’t know exactly. I thought there were four and a half thousand people, supposedly there were two thousand. I don’t know.

HEDGES: And you’re with your mother–

MOZES: –With my mother–

HEDGES: –And at this point you’re how old?

MOZES: At this point, twelve.

HEDGES: Twelve. And were you aware [crosstalk] of–

HEDGES: -Of what had happened to your father and your brother or not?

HEDGES: –You and I both saw the movie “Son of Saul,” Hungarian film about the Sonderkommandos. These are the Jews in the camp who operated the crematoriums, met the transports, you know, herded people towards the crematoriums or, if they were lucky enough, to places of work, and you spoke about getting off that train and one of the first people you meet is a Sonderkommando.

MOZES: Yes. Well, yes. There was the [Sonderkommando], but there were the Germans. First we see the Germans standing lined up, one next to the other, and with dogs, and then the Sonderkommando comes in and they help people off the trains and–

HEDGES: How long had you been on the train?

MOZES: On the train three or four days. Three days, three nights, no water, you couldn’t eat, you know, going to the bathroom, there was one pail which, that was like a trip through Hell. That was [inaud.]

HEDGES: Can you talk about how, when you got out of the train, you saw your mother’s face?

By the way, on the train there was a man and he screamed. He really screamed, actually, they’re taking us to a place where they will burn us, and there was like a rebel in me or whatever, and I started saying, you can’t scare people like that. You should not say, things like that could not exist.

HEDGES: And what was [crosstalk] your conversation with the–

HEDGES: What was your conversation with the Sonderkommando when you got off the train?

MOZES: With the Sonderkommando they, I asked, where are we? First of all, it looked very clean. The ramp was very clean and we saw from far the entrance, [inaud.]. And I am not positive, but I think that we heard music, the orchestra that played. They did have an orchestra.

HEDGES: But what did he say? You asked him a question.

HEDGES: [interceding]–When you look back after all this time, how do you react to that lie?

HEDGES: [interceding]–They would have shot you.

MOZES: They would have shot. The shooting wouldn’t have been that bad, because a shot, it takes a second, just like you get an injection. You are afraid of it, but, you know, it’s just a prick and it goes away. A shot, if you die you’re lucky, but being beaten or being devoured by dogs, that’s scary.

MOZES: No. No. Because they were picked for, I’m sure they got into Auschwitz, they did not go with the thought they’ll be in the Sonderkommando, they will be in charge of the bodies or of putting the people into the–

HEDGES: –Which was their job. Basically, after the gas chambers the Sonderkommandos would load the bodies into the crematorium.

MOZES: Would take them out from. They also sort of told people, just go in. Go in. And the Germans, the Germans went also in. There were always Germans. The Sonderkommando was never by itself.

HEDGES: How do you look at that?

MOZES: And we were shaved. My hair was shaved. Whoever had the underarm hair, pubic hair, I didn’t yet at that time, so that was part of Sonderkommando or another kommando that would take charge [crosstalk] of those things.

HEDGES: [interceding] But how do you look at them now, when you look back?

MOZES: Right now I find them tragic figures. Just tragic, because they were killed after everything–

HEDGES: [interceding] And yet they were, they did help administer the killing.

MOZES: A sheep herder. I don’t like the word that we went as sheep. We did not go like sheep. We just were resigned, and we actually did not know where we going. No one, no one in their right mind could imagine that something like that could happen.

HEDGES: And you, I think, said that when you got off the train you can still, to this day, remember the face in detail of that Sonderkommando, even more than your own father.

MOZES: I don’t know why. I take to kindness, and he had a nice face. He was strong-looking, the fellow. Very tall, blondish. Frankly, I’m not sure if he was Jewish or not. He did not look Jewish, with blonde hair. Of course, he wore a cap, that striped cap and he wore the [inaud.], the striped pajamas, the striped suit. But there was like a kindness in his smile. He smiled at me and he said, don’t worry, kid, like everything would be okay.

Special Thanks to Liz Asch