"Body of War" with Phil Donahue

Phil Donahue on his new documentary and the situation in Iraq

Phil Donahue on his new documentary and the situation in Iraq 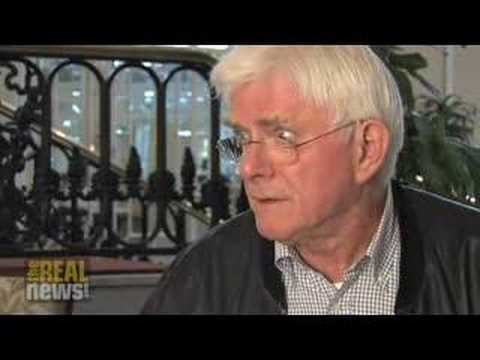 SHARMINI PERIES, JOURNALIST, TRNN: I’m Sharmini Peries. I’m here with Phil Donahue at Take Back America Conference, and I’m going to talk to him about a recent film he’s been making. Tell me about the main character of this film—Thomas.

PHIL DONAHUE: Thomas Young was 24 years old when he took a bullet. He was in the back of a truck, uncovered. The bullet came down, entered here, and exited T4. That’s just between the shoulder blade–right there. So he is paralyzed from the chest down. I met him at Walter Reed. He was all medicated, wall-to-wall morphine, very loopy. But I did talk to his mother in the room when I was there, and I learned about the gravity of his injury, and I thought the American people should see this. Thomas Young is his name. Kansas City, Missouri. Heartland kid. Signed up 9/13. Saw the president on the pile, wanted to get the evildoers, and right away said, “Why am I going to Iraq?” It’s too late now. He’s in. And the closer you get to Thomas, the more you are just—. Thomas can’t cough. It’s not only that he can’t walk; he can’t cough. His upper respiratory system is disabled, so he becomes overheated and has to put his head down between his legs. He throws up every morning. His pills have pills to correct the side effects of the other pills. Erectile dysfunction—27 years old; prime of life. I mean, what’s a sacrifice here? Bowel and bladder every day. You know, I don’t think people appreciate the sacrifice that’s been made by thousands of families. I mean, these injuries not only turn the injured upside down, they just roil the whole family. I mean, there are thousands of homes in this country that this drama is taking place behind closed doors, and the American people never see it, and there are still people beating drums for this war. And these are the same people who will send other people’s kids to fight it. We have to stop this. This is not fair to the American troops. This is not fair to our grandchildren. I mean, we look to all the world like a warrior nation, and it’s endangering people yet to be born in this country who are going to be conscripted. You know, we’re so filled with pretense. You know, “America! America!” and half of us don’t vote. You know, and we’re into God bless this, that, my dog and my cat, and now we’re worried about whether or not we’re going to lose our homes. And it’s hard to tell someone who’s about to lose their home that they should be worried about Iraq, but I’d hate to be in Iraq as an American uniformed military personnel and read that I’m no longer at the top of the list of what America is worried about. I mean, we’ve sent these kids to war, and now we’re not really thinking about them. This is horrible. This is a huge, foreign, massive military blunder. Senator McCain is saying, “We must win, my friends. My friends, we must win.” Senator McCain, what does “win” mean? And how long shall we take to win? And are you willing to sacrifice more people in this war? In other words, we should send more soldiers to war to die because we’ve already sent soldiers to war to die. Stop this, Senator McCain. Iraq was never a threat to us. Iraq didn’t have weapons of mass destruction. Iraq didn’t knock down the towers, Senator. It didn’t knock down the towers. It was our invasion that brought al-Qaeda into Iraq. Now, let’s see. Let’s be brave. Let’s remember all those people who are saying “Don’t send bombs to kill innocent people to avenge the death of my innocent loved one.” Those are the true Americans. And Senator, the next time we go to war, make sure your colleagues in the Senate vote it up or down according to Article 1, Section 8 of the United States Constitution, which mandates that.

PERIES: We should be asking hard questions of all of our senators, including Obama and including *[crosstalk]

PERIES: *Senator Clinton. So what are your questions for them?

Phil Donahue and the Donahue show have been honored with 20 Daytime Emmy Awards, including nine for Outstanding Host and a George Foster Peabody Broadcasting Journalism Award.