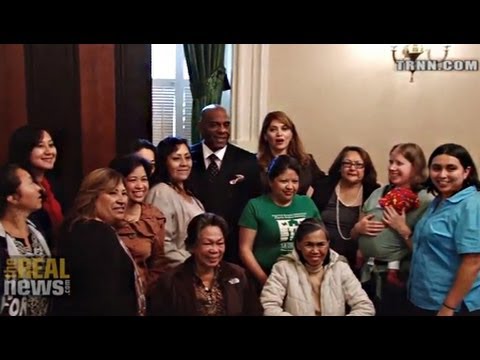 DYAN RUIZ, REPORTER: In California, advocates, workers, and politicians are trying to pass into law a bill that protects the rights of domestic workers.

MARIA LEAL, DOMESTIC WORKER (SUBTITLED TRANSL.): The message I want to give to the governor is that on this occasion he needs to support us and our bill of rights, because it is extremely important for us as domestic workers to pass this bill, because we need breaks, we need lunch, we need an increase in pay. We need many things. I can’t imagine that it would be a challenge for him to support us.

RUIZ: Advocates held a Mother’s Day brunch, inviting lawmakers to commit support for the Domestic Workers Bill of Rights. Rights and protections for domestic workers are excluded from existing labour laws. They’re often paid less than minimum wage, working without breaks and other basic rights. There are an estimated 200,000 domestic workers in California, including nannies, house cleaners, and caregivers.

KATIE JOAQUIN, CALIFORNIA DOMESTIC WORKERS COALITION: Right now in California, there’s domestic workers that remain excluded from the most basic of protections. We’re talking about overtime, the right to have a meal break, the right to have a rest break. And this is traced all the way back to 1938, you know, when the first federal labor law was passed and domestic workers were left out, along with farm workers. And this is because, you know, the African Americans who at the time were the domestic workers and were the people working in the fields were still being discriminated against. You know. And there were Southern lawmakers that didn’t want to open the doors of equality to them. And to this day, domestic workers are still the ones that are left behind.

And so there are some domestic workers that are caring for the elderly, caring for people with disabilities, caring for children, and they’re still not having protections to be able to have a rest break after four hours of work. And so this bill is about really fixing that. And so we feel like this bill is a basic thing that isn’t even reaching for the sky, it’s not reaching too high. It’s asking for basic human rights for people that do really important work for California.

TOM AMMIANO, ASSEMBLY MEMBER, 17TH DISTRICT: In many ways it’s a women’s issue, a very strong women’s issue, obviously an immigrants rights issue, and here in California, not exclusively, but a Latino issue, because we have many domestic workers who are Filipino and Asian, also African American. So the idea that someone can work isolated in someone else’s house and not have any rights other than dealing with their employer, most likely they’re low-income, they need that job even if it’s a pittance of a pay, they’re afraid they’ll be deported and they’ve been threatened with that if they don’t stay on and ignore their own family, you know, my thinking is it’s kind of like plantation politics.

RUIZ: Senator Leland Yee says the bill has advantages for workers and employers.

LELAND YEE, SENATOR, SAN FRANCISCO AND SAN MATEO COUNTIES: What it also does is to establish a formal relationship between the employer and employee, so that you don’t have a situation where the employee, the domestic worker, is scratching his or her head and says, well, gee, you know, what is it that the employer is supposed to do for me? What are the terms and conditions of this particular employment? And then on the other side, for the employer, you know, they don’t have to scratch their head and says, well, what is it that I am expecting from them. And so there’s some clarity in that relationship–working conditions, salaries, you know, all kinds of other things that go on with any relationship between an employer and employee.

RUIZ: Meg Yardley is a parent who relies on domestic workers and supports the bill.

MEG YARDLEY, EMPLOYER OF A DOMESTIC WORKER: I can’t imagine what I’d have to do if I had to make a choice between, you know, being at home and going to work, ’cause I love the work that I do. So I think for me, you know, knowing that my daughter is in good hands, that she’s being taken care of, that somebody is looking after her and giving her love and attention and all of that means that I can go to work and do my job, which I also really love, you know, without worrying about my daughter’s care and about what’s happening to her.

RUIZ: Assemblyman Tom Ammiano introduced a similar bill in 2011. It was passed by the Assembly and Senate, but vetoed by Governor Jerry Brown.

AMMIANO: We need the governor to change his mind. Apparently he has very strong personal feelings that in some ways this issue is a trivial issue. While the Bill passed out of both Houses, he still vetoed it. So we have resubmitted the bill. We are ready to negotiate and accommodate. He has not extended us the courtesy of a meeting, a personal meeting, which is protocol around here. So we’re working with his aides, but he’s really the guy.

RUIZ: In an April 24 hearing, individual home care companies and advocacy group California Association for Health Services at Home, or CAHSAH, said the bill would, quote, “drastically increase the costs of home care and make live-in care completely unaffordable,” especially for the elderly and disabled. Thus, clients would turn to an underground economy.

YARDLEY: I understand the concerns people have about pay, because it is really difficult to afford good care. But I also think that we can’t, you know, make that decision on the backs of domestic workers. I think any parent can probably tell you that they’re a better parent when they’ve have meal and rest breaks, you know, when you’ve had enough sleep, when you’ve had a chance to eat something or sit down for a few minutes, when you’re not overly stressed about money or how to get by, when you’re being fairly paid, when you don’t have to work long hours. You know, I certainly know I’m a better parent when all of those conditions are met. So that makes me believe that I want my childcare provider to have the same conditions, because I think that they’re going to provide better care for my child. So, you know, I think that this is really about trying to find a win-win, where we can have quality care for our children and our families, but also provide, you know, dignity and respect and rights for the people that are providing the care.

RUIZ: A report distributed that day called Home Economics surveyed over 2,000 domestic workers nationally. The research team included the National Domestic Workers Alliance, University of Illinois at Chicago, and Data Center. It documents serious and widespread mistreatment and exploitation of domestic workers throughout the U.S. Guillermina Castellanos worked extensively on the report.

GUILLERMINA CASTELLANOS, LA COLECTIVA DE MUJERES (SUBTITLED TRANSL.): For those of us who work with domestic workers, showing this report has given us a legitimacy that we didn’t have before. Now when we do legislative visits, we give this report to legislators and it gives us confidence. The report also helped involve other organizations in the fight for domestic workers rights. It strengthened organizations across the country, which is an important goal of the national alliance. This is historic in a country that has never talked about domestic workers. For us, it’s extremely important to have a report of this magnitude that talks about the experience of domestic workers.

RUIZ: Critical votes for the Bill of Rights in California are coming up. A similar bill is now a law in New York, and seven states, including California, are moving to pass similar measures. This is part of a national domestic workers rights campaign. Many domestic workers are mothers themselves and want nothing more on this Mother’s Day than equal rights.

This Dyan Ruiz for The Real News Network.