As the Flotilla boats to Gaza are prevented from leaving the Greek ports, the Israeli government congratulates its diplomatic efforts in pressuring Greece to stop the activists. Earlier in the week, the Israeli press cited an army debrief when all major newspapers reported the Flotilla activists will carry lethal acid on board their ships, according to army intelligence. The Real News' Lia Tarachansky questions Maj. Gen. Eitan Dangot, the Coordinator of Government Activities in the Territories, and the Minister of Public Diplomacy and Diaspora Affairs, Yuli Edelstein. She also speaks with Huweida Arraf, the Co-Founder of the Free Gaza Movement, and Ofer Neiman, Editor of the Occupation Magazine about the Israeli coverage of the Flotilla to Gaza, and the media battle between government and activists.

As the Flotilla boats to Gaza are prevented from leaving the Greek ports, the Israeli government congratulates its diplomatic efforts in pressuring Greece to stop the activists. Earlier in the week, the Israeli press cited an army debrief when all major newspapers reported the Flotilla activists will carry lethal acid on board their ships, according to army intelligence. The Real News' Lia Tarachansky questions Maj. Gen. Eitan Dangot, the Coordinator of Government Activities in the Territories, and the Minister of Public Diplomacy and Diaspora Affairs, Yuli Edelstein. She also speaks with Huweida Arraf, the Co-Founder of the Free Gaza Movement, and Ofer Neiman, Editor of the Occupation Magazine about the Israeli coverage of the Flotilla to Gaza, and the media battle between government and activists. 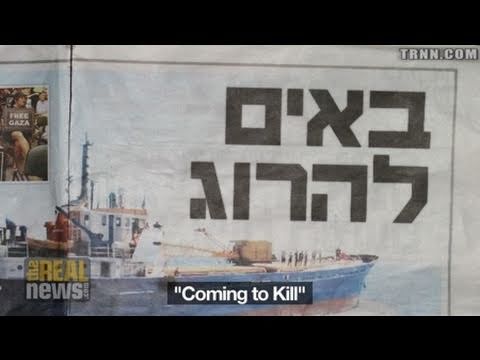 LIA TARACHANSKY, TRNN: On Friday, the Greek leadership issued an order preventing the flotilla boats from leaving its shores for Gaza. Israeli Prime Minister Benjamin Netanyahu congratulated the Greek prime minister, George Papandreou, in a speech on Thursday. According to an unnamed top Israeli official, today there is a different Greece when it comes to Israel, the organizers of the flotilla did not understand this, and now they’re paying the price. On Wednesday, the Government Press Office held a briefing with Public Diplomacy and Diaspora Affairs Minister Yuli Edelstein.

YULI EDELSTEIN, MINISTER OF PUBLIC DIPLOMACY AND DIASPORA AFFAIRS: First of all, we are not trying to hide. On the contrary, we are proud that we’ve made a lot of diplomatic efforts in different countries in order to explain to the governments, leaders, people, the things that I’ve been just saying [snip] probably could influence, you know, in the positive direction this whole intention of coming with this violent and unnecessary flotilla.

TARACHANSKY: On Saturday, Israeli activists gathered outside the Greek embassy in Tel Aviv to voice their opposition.

CROWD: No justice! No peace! Shame on you Greece!

CROWD (SUBTITLED TRANSL.): Let the flotilla into Gaza! Send the traitors to jail!

TARACHANSKY: [incompr.] the media battle between Israel and the coming flotilla sharply escalated when the Israeli press reported flotilla activists were carrying sulphuric acid with the intention of killing as many Israeli soldiers as possible. The articles, which cited an army debrief from Sunday night, portrayed the Free Gaza Movement as a front for terrorists. Ofer Neiman is the editor of the Israeli Occupation Magazine.

OFER NEIMAN, EDITOR, OCCUPATION MAGAZINE: It seems very orchestrated, I mean, even more than previous affairs, like you said. All the main newspapers, including Haaretz, coming out with pretty much the same report as facts. If you use such a headline, "Coming to Kill", they’re coming to kill us, this amounts to a blood libel campaign against the activists. What this says implicitly is that it’s permissible to kill the activists because they’re coming to kill us.

TARACHANSKY: Two men were identified in this Maariv article as being linked to Hamas and were named as passengers on the flotilla.

EDELSTEIN: We are getting prepared. And when I say we, it’s a very big we: it’s all the government ministries, it’s the IDF, it’s us on the front of diplomacy, public diplomacy, information efforts. We are trying to get ready for all the possible scenarios. We don’t know how many people of different persuasion will be there on these ships. We know for a fact that the number of representatives of different terror groups, terror organizations, are on their way to join the flotilla.

TARACHANSKY: According to the organizers of the flotilla, the two people that were identified in the press as being linked to Hamas, Amin Abu Rashid and Mohammed Ahmed Hanoun, they’re not on the list of people to join the boats. What’s your comment on that?

EDELSTEIN: Well, if that would be the case, I would be more than happy. My doubt is not about these two specific Hamas terrorists. My doubt is whether they can really–the organizers of these nice delegations coming from, you name it, Ireland, Canada, United States, or wherever, whether they can really be in that kind of control and can really, in real time, confront the terrorists or unidentified people who will be joining the flotilla.

TARACHANSKY: The Real News spoke with Huweida Arraf, one of the founders of the Free Gaza Movement, who organized nine previous attempts to break the siege on Gaza.

HUWEIDA ARRAF, COFOUNDER, FREE GAZA MOVEMENT: –another empty accusation by Israel. I am also the cofounder of the International Solidarity Movement. I’ve been working in the occupied territories with activists from all around the world for the last decade. And this same accusation was thrown at us almost from the day of our founding, that we support terror or enable terrorism, or that people that come with us are terrorists. Israeli propaganda agents even labeled our colleague that they killed, Rachel Corrie, you know, as a terrorist supporter, and they blamed her for her own death, that she jumped in front of a bulldozer. I mean, this is part of Israel’s propaganda, and there’s absolutely no truth to that whatsoever.

TARACHANSKY: So you’re not bringing on board Amin Abu Rashid and Mohammed Ahmed Hanoun?

ARRAF: Well, first of all I should say that I do not in any way justify or agree with Israel’s claims that these two are terrorists in any way. And we know that–how loosely Israel throws that term and everyone that it throws that term at. However, no, both of those people have been organizing, have been working to support the people of Palestine and the people of Gaza in terms of the effort to break the siege on Gaza, but they are not on our list of passengers.

TARACHANSKY: Yesterday I spoke to the Israeli army press woman, and she said, we have no way of knowing what’s on these ships, because we can’t inspect them in the countries that they’re sailing from, because that would be overstepping our territorial boundaries, but we also can inspect them at sea.

NEIMAN: Yeah. I mean, but he says that they do know that there are various chemicals and terrorists and assassins on board these ships. I mean, if that’s what she said, that clearly indicates that what they’ve been saying to the press is just propaganda.

TARACHANSKY: Did you talk about whether you are bringing chemicals and what your intention with them is?

ARRAF: I really don’t know how they could have come to that conclusion. There’s absolutely no evidence of that whatsoever. Right now I am collecting a list of cargo that have been donated by people, and that is not on our list of cargo yet. However, if this agricultural supplies, which might include some chemical fertilizer and otherwise, is donated, I don’t think we would have a problem taking that if it’s not to be used, thrown at anybody or used against soldiers, it is to be delivered to the farmers of Gaza. But as of right now, to be clear, we do not have that on our cargo list.

TARACHANSKY: But Neiman and Arraf are not the only ones charging the Israeli leadership with spin. On Thursday, ministers from the Security Cabinet spoke out against Israeli Prime Minister Netanyahu and accused him of presenting them with one version of intelligence and feeding another one to the press. AFB reported one of the ministers as saying Netanyahu decided to change the version about the nature of the flotilla for two reasons. The first is for reasons of covering himself. If suddenly in the course of the military operation something goes awry and there are casualties, Israel will be able to say that it warned of that in advance. The second reason is to apply pressure on the international community so that governments will prevent the ships from leaving for the flotilla from the outset. This is the second time this week that an internal struggle in the Israeli leadership made it to the press. On Saturday, the Government Press Office sent a letter to foreign journalists warning them that if they cover the flotilla on board, they may be banned from Israel for ten years. The next day, following an outcry from Knesset members from his own party, Netanyahu recanted. Also speaking on Wednesday was Major General Eitan Dangot, the coordinator of the government activities in the occupied territories. After the flotilla last year, Israel decided to allow the import of many items it previously banned, such as cumin, dried fruit, and fishing rods. While being questioned by journalists, Dangot denied that the drastic reversal of Israel’s ban on import had anything to do with last year’s flotilla. Dangot also denied that Israel’s prohibition of trade in and out of Gaza is based on a policy of economic warfare, something that the diplomatic cables released by WikiLeaks revealed.

TARACHANSKY: Sorry. I mean in terms specifically as a policy of economic warfare, do you think that because of the economic punishment, Hamas is weakened?

MAJ. GEN. EITAN DANGOT, COORDINATOR, GOV’T ACTIVITIES IN THE TERRITORIES: [incompr.] economic punishment. We are not talking about punishment of population. We are talking about security needs. I think that today, or as I say, after the deterrence of the last operation, when we have the opportunity to extend the policy, and the result today, as you see, is different. This is therefore the long-term policy. There are some times that you have to close crossing while it is [incompr.] But no one has a policy from the beginning to damage economy or individuals for someone to live, but only under security needs and [incompr.]

TARACHANSKY: While Dangot was presenting data showing the number of trucks getting into the Gaza Strip, he claimed Israel does not allow exports out of the Gaza Strip, because it doesn’t have the scanning equipment for security checks. However, before the Hamas government was elected in 2006, 85 percent of the goods exported from the Strip were bound for Israel and the West Bank. Gisha is an Israeli organization that works with Gazans on the freedom of movement. In a recent press release, they said 83 percent of Gaza’s factories are now closed or working at 50 percent or less capacity. In the second part of this segment, we speak to Sari Bashi, the executive director of Gisha, about the naval blockade on Gaza and the easing of the siege as outlined by Major General Eitan Dangot.