Part 5 of Paul Jay and Aaron Mate’s interactive discussion with viewers about the real reasons Trump should be considered a traitor by the American people – From a live recording on August 2nd, 2018

Part 5 of Paul Jay and Aaron Mate’s interactive discussion with viewers about the real reasons Trump should be considered a traitor by the American people – From a live recording on August 2nd, 2018 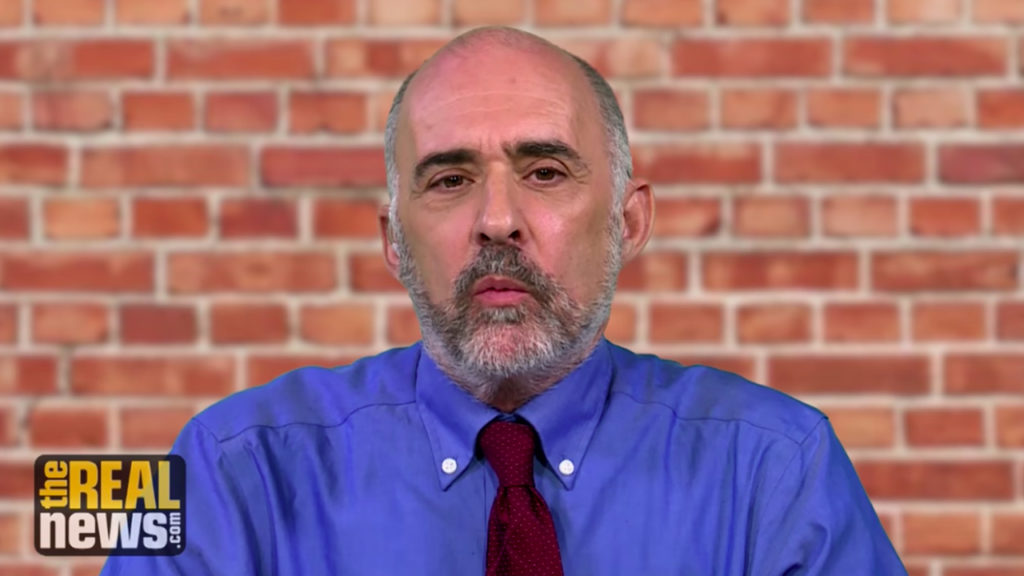 AARON MATE: It’s The Real News. I’m Aaron Mate. And we are doing a live Q&A with The Real News Senior Editor Paul Jay. He’ll be taking your questions throughout this hour, so if you have them put them in the chat below wherever you’re watching, or send them to us on Twitter. Welcome, Paul.

Russiagate right now is being used in many ways to undermine the left, and to illustrate, I want to play a couple of clips. First, yesterday there was a hearing in the Senate on social media manipulation, and Republican Senator Richard Burr said that Russian influence efforts are ongoing and a grave threat.

RICHARD BURR: The Russians conducted a structured influence campaign using U.S.-based social media platforms and others to target the American people using divisive issues such as race, immigration, and sexual orientation. That campaign is still active today. They didn’t do it because they have political leanings to the right or to the left, or because they care about our elections, but rather because a weak America is good for Russia. Some feel that we as a society are sitting in a burning room calmly drinking a cup of coffee telling ourselves this is fine. That’s not fine, and that’s not the case.

AARON MATE: That’s not fine, that’s not the case, says Senator Richard Burr. And in the midst of all this new controversy over Facebook apparently finding fake accounts and even shutting down pages, we’ve seen language like that, that Richard Burr just used, where he talked about divisive issues such as racism. We’ve seen that being used to delete groups and target groups that are fighting racism. So for example, there was an upcoming counterprotest to a Unite the Right rally. And Facebook deleted their event page because they accused them of being fake, when really, actually, this was a real protest. So what can this do but simply taint the people who are fighting back against the right? Because you have people like Richard Burr trying to tie them to a Russian influence operation. And of course the foes, meanwhile, who are escaping relatively unscathed or without much scrutiny, are people like who you mentioned, Paul, Steve Bannon. And this is him speaking to a far-right gathering in France.

AARON MATE: So that is Steve Bannon, the former chief strategist for President Trump speaking to the far right in France.

So Paul, I imagine if you’re Steve Bannon you’ve got to be loving this scene where you have both parties, Democrats and Republicans, basically painting leftist groups, anti-racists, antifascists, with the brush of being possible Kremlin dupes or Kremlin ops.

PAUL JAY: Oh, where to start with all of this, Aaron? Can I- let me back up to your first clip first, because I think it’s kind of fundamental. And then let me try to pick up the next point.

Why does Russia benefit if America is weak? Russia is about the oligarchs. The oligarchs are about money. The money that matters to the oligarchs, first of all, is mostly U.S. dollars. They have properties they own all over the world. And first and foremost, the Russian oligarchs- like the American oligarchs, and the Chinese, and the Europeans, and so on- they depend on the United States to manage global capitalism. If the United States were really to be so fractured by the Russian machinations and all that, and the American economy and politics was to go down the toilet because of all of what Russia did, what the hell happens to the wealth of the Russian oligarchs? Global capitalism unravels if the American capitalism unravels, at least in this era. This may change in the future. Where do the Russians gain?

Now, there is a sort of dark- there are many dark sides to the Russian state and Putin, one of which is the alliance with some of the European far right, particularly Marie Le Pen in France. And Steve Bannon’s there talking- I believe it was Marie Le Pen’s organization he was speaking to. And there’s pretty clear evidence that Marie Le Pen’s party borrowed money from a Russian bank. And it’s, I think even the former prime minister, I believe prime minister at one point under Putin, who’s now gone over to the opposition, even he says this was a quid pro quo, because Marie Le Pen came out and supported Russia’s position on Crimea and supported the referendum. And there are some ideological convergences between the sort of leader of this Russian, Christian, mostly white state and some of the ideology of the European far right. Apparently there was a cooperation agreement between Putin’s party and the Austrian far right party, they actually signed some kind of cooperation agreement.

But this does not in any way speak to how Russia gains without this broken up or screwed up EU. How does Russia gain for that? I mean, Russia- one of the primary markets for Russian energy is Europe. If Europe becomes a mess and the EU falls apart, and it weakens the economies of Europe, how does that benefit Russia for one of its major customers to be in disarray? The Russians are not trying to march into Europe. They never were going to march into Western Europe. That was all a crock, and the CIA analysts kept telling Reagan that the Soviet Union’s military posture was essentially defensive, not offensive. And there’s lots of data that proves that. But certainly in today’s world, Russia’s going to try to take over Western Europe? It’s ridiculous. Russia wants the destruction of Western Europe and the EU for what? Yes, they would like the EU not to be on the sanctions page with the United States. And yes, it’s in Putin’s interest, the Russian state’s interest, to encourage some political forces, like on the right, who support Russia’s position on Crimea and don’t, and don’t want the sanctions; support Russia’s position on lifting the sanctions on Russia.

But this image that senator raises that Russia is out to destroy the United States, it’s insane. It’s completely insane. And I go back to the previous thing we were talking about, and you know, so much of the liberal establishment is talking somewhat similar language. It just makes no bloody sense.