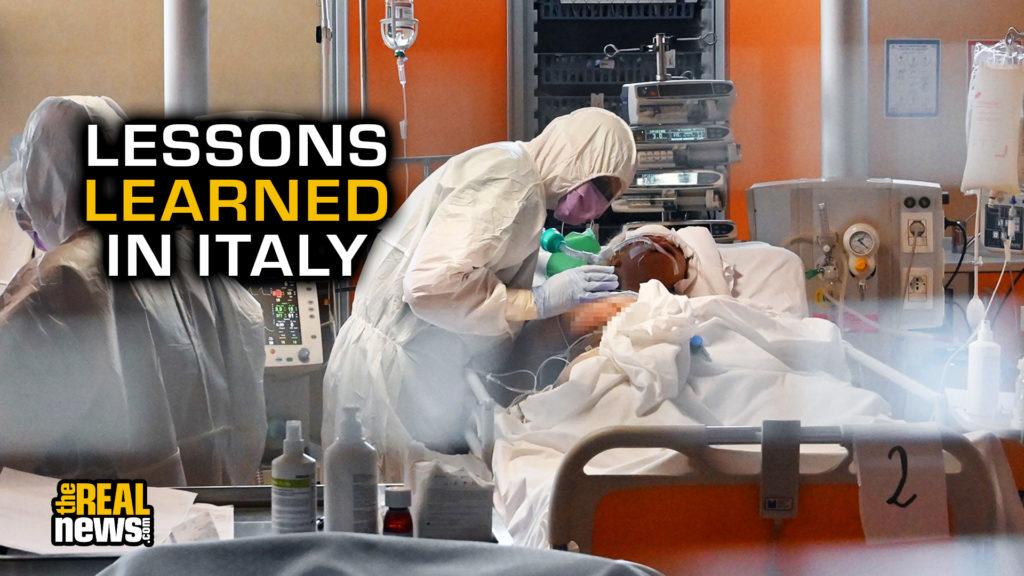 Jaisal Noor: No country has been hit as hard by the coronavirus pandemic as Italy. With over 105,000 confirmed cases resulting in over 12,000 deaths, Italy has the highest COVID-19 death rate in the world. Italy’s healthcare system is on the brink, with medical workers and frontline workers making huge sacrifices amid a national lockdown that has entered its fourth week and has only now finally shown signs it’s been effective in slowing deaths and reducing the rate of infection. Lombardy, the wealthiest and most populous region of Italy, has become the single deadliest coronavirus hotspot on the planet. This is Moreno [Trezoldi 00:00:41], head doctor in the COVID-19 intensive care unit of Milan’s San Rafael Hospital.

Dr. Moreno Tresoldi: Certainly this is an extraordinary situation. It initially took us by surprise. We did not expect a situation like this, that would last for so long and be so dramatic, particularly the peak, which has really put the hospitals under strain.

Jaisal Noor: Hospitals across Italy had been under enormous strain. They had been running out of space and equipment, and staff has not rested in weeks, says Tresoldi.

Dr. Moreno Tresoldi: Obviously our shifts are incredibly tiring. We are trying to give ourselves moments where the group can rest a little bit, but it isn’t easy because we have a great number of beds to deal with.

Jaisal Noor: Three weeks after stringent lockdown measures were introduced, each more restrictive than the next, Italy is finally experiencing a decrease in new cases. The lockdown began on February 23rd. Despite the lockdown, Italian workers have sought to organize together to improve their safety situation amid the COVID-19 pandemic, says Rome based labor organizer, activist and writer, Luca De Crescenzo.

Luca De Crescenzo: The government declared national emergency on the 31st of January. Actually the first made sure about safety at the workplace was taken the 14 of March, so it was really, really late. The first known cases in Lombardy were on the 21st of February, so the epidemic was already widespread and still you had millions of workers gathering at the workplaces and factories, call centers, warehouses, with no safety measures.

Jaisal Noor: De Crescenzo says Italian workers have carried out walkout strikes and protests. Those strikes have included workers in Amazon warehouses and many others.

Luca De Crescenzo: The biggest struggled were at the factories because the north of Italy, Lombardia, which is the region which was mostly hit by the COVID-19 epidemic, is also the most famous divided region in Italy, and there are a lot of steel workers factories and many of them actually went on strike.

Jaisal Noor: De Crescenzo says workers who have lost their jobs received a $600 euro compensation, and have had to rely on charity to get by.

Luca DeCrescenzo: Now you are seeing a very harsh situation, where people are going to the supermarket and then make grocery shop and then you don’t want to pay for it. And the answer from the state was police and even the army. So now they are talking about giving some funds and finance to the township in order for them to give people the money just to buy food.

Jaisal Noor: Years of austerity measures have weakened the healthcare system ahead of the crisis sparked by COVID-19.

Luca DeCrescenzo: We have a universal healthcare system, but it’s also real that in the last 10 years or more, there were a lot of cuts on the budget. This really was one of the reason why it was put under much stress under this emergency situation and it’s maybe one of the reasons why we have registered so many deaths, actually even in the north of Italy.

Dr. Alessandro Olivi: Listen to the scientists and to the public health officials.

Jaisal Noor: Says Dr. Alessandro Olivi, who spent 27 years at Johns Hopkins Hospital in Baltimore, serving as Vice Chairman of the Department of Neurosurgery and is the Director of the Division of Neurosurgical Oncology.

Dr. Alessandro Olivi: Fauci, the confronted with who is probably the reasoning arm of that administration. And certainly be prepared with the hospitals that are able to change very rapidly the number of the patients with the tremendous needs.

Jaisal Noor: The situation in Italy is a human tragedy of significant proportions, as Olivi, who heads the neurosurgery department at the prestigious Gemelli Hospital in Rome. Just like the US, Italy has experienced the devastating effect of a lack of medical equipment and personal protective equipment, or PPE.

Dr. Alessandro Olivi: As far as the shortage of PPE and then the ventilators, no question that this has been, there are a lot of issues about shortage from masks and other equipment and ventilators and in all honesty, the many situation. I know this for a fact, as firsthand information, there have been decisions, very tough decisions that we made in Lombardy of doctor intubating people because there were not enough ventilators or places in the ICU.

Jaisal Noor: For the Real News, this is Jaisal Noor.