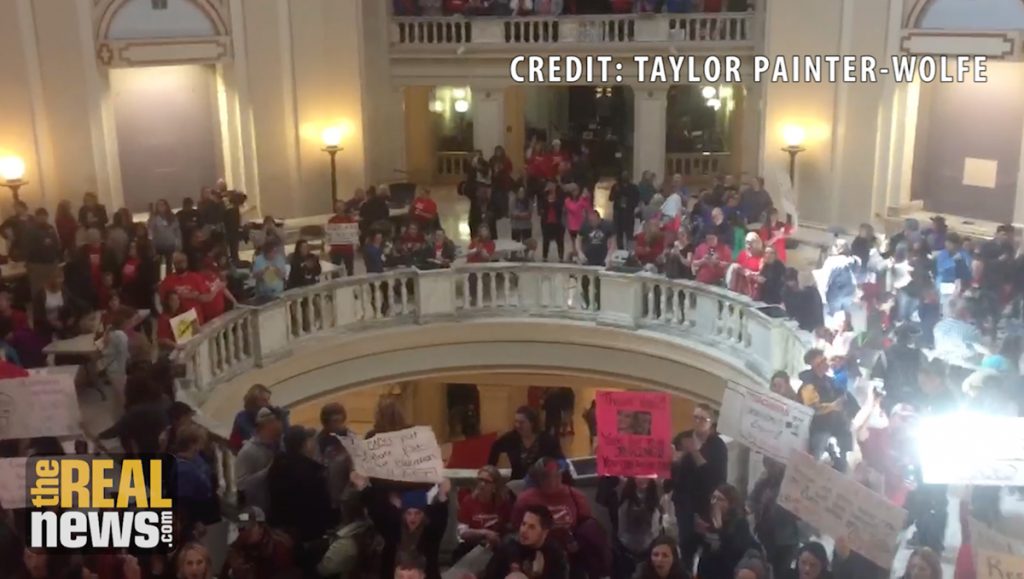 JAISAL NOOR: Welcome to the Real News Network. I’m Jaisal Noor in Baltimore. A wave of recent teacher revolts has swept red states nationwide, from West Virginia earlier this year, to Kentucky last week, and Oklahoma, where thousands of teachers remain on strike Tuesday. Their demands range from higher pay and more funding for schools in Oklahoma, where teachers are among the lowest paid in the nation, to fighting to save their pensions and to oppose the spread of privatized charter schools in Kentucky.

Teachers have grabbed the headlines, but it’s not surprising the mainstream media has failed to fully grasp the significance and impact of these actions nationwide. To discuss all of this we’re now joined by Lois Weiner, director of urban education in the teacher unionism policy project at the New Jersey City University. Thanks so much for joining us again.

LOIS WEINER: Thank you for the invitation, Jaisal.

LOIS WEINER: Well, I think we can only understand this moment in light of the history of teacher unionism for the past 40 years, and more recently, U.S. politics. And that is the 2016 election and the candidacies of both Bernie Sanders and Donald Trump, and Trump’s victory. So I think that’s the big context for understanding this. And what really has happened in the last 30 years, or 40 years, in teacher unionism is that the unions became quickly sclerotic, more conservative and bureaucratic. And they, as the right increased its attacks, the unions, really I think, cowered and took refuge in what’s called the business union model. That, that history was really broken with the victory of the Chicago Teachers Union Caucus of Rank and File Educators, and their union election and their leadership of the union in a 2012 strike, which put teacher unionism as a progressive force back on the map as a militant progressive force within the labor movement.

I think what we’re seeing in these red state walkouts is we’re really seeing the second iteration of the rebirth of teacher unionism in this country. And it is once again sparking a revitalization of labor and of unions nationally, which is extremely important as we, as public employee unions face the Janus decision in the Supreme Court. And I think that is very, very important background for us to understand that there has been a real radicalization and politicization of working people in this country. And the question is whether the left is going to seize the initiative in leading it, or whether we’re going to allow the right to continue to do so. And the significance of the teacher strikes I think are a clarion call for progressives and the left to really start talking about the economy. And that’s really, and funding, and taxing the corporations, and support for social services, and giving kids the schools that they deserve.

JAISAL NOOR: Teachers unions in the states that are, are witnessing these teacher revolts, you know, they’re limited by collective bargaining. They’re right to work states. So they have challenges there. And they’re also, the unions are being targeted, like in Kentucky, by the governor who says that they are the problem, they’re an impasse to a solution, you know, to fixing their pension.

But on the other hand, I think what’s missed in these discussions is that in West Virginia, for example, teachers bucked their union, who told them to go back to work a week into their, a week into their strike. And they decided to continue that strike for a few more days.

LOIS WEINER: That pattern is true in all the states, Jaisal. That pattern is absolutely true in all the states. And it’s not a pattern that makes people who are supporters of labor unions comfortable to discuss. But I think that we have to be really unsentimental and self-critical about what’s occurred. These movements have occurred, have occurred outside the union apparatus. And the reason they’ve occurred outside the union apparatus is that, and I find this in an interview after another, one discussion after another with activists, with classroom teachers who become leaders, is that they feel the union has been irrelevant to them professionally. They feel that the unions haven’t been there for them to defend their interests as workers, and the way I would cast that, as to the unions have not been present to be militant defenders of the ideals of the teaching profession. And one of those ideals of the teaching profession is that it should be a career. We should be able to teach for a career, and know that at the end of our career we’re going to have a pension. That’s part of what defines work as a career, is that there is a trajectory. You know that you’re going to do it for 20 or 25 years. You’re going to get better, you’re going to continue to do it. You’re going to be able to share your knowledge with people who are newcomers to the profession.

And of course, the other aspect of a profession is that you’re compensated for your work. You’re not paying for supplies in a profession. What, how many doctors pay for, how many dentists pay for the drills that they use in cleaning your teeth, right? You know, we, we, we need as a society if teaching is going to be a profession we have to fund it as such. And that professional ideal, which the unions have failed to grasp, they failed to seize that narrative, and to explain to people that these strikes are about defending the teaching profession and teaching as a career. And because the unions have not understood, actually, that they’ve not they’ve not understood, teachers unions, so that’s their job, to defend the profession and the economic basis of the profession. They’ve not had the courage to do it for that reason. These movements have occurred, have organized outside the union structure.

And I think the task now for people in these states is to take back the unions. The unions have become shells. And I want to see teachers in all of these states use the walkout as a way to energize the unions, so that they can fight for the legal protections that they need. The other thing I want to point out is that, you know, there’s a way in which collective bargaining, and this is a debate among labor historians that has, and that I think is very appropriate now, is very apt. It’s been, it’s been present but not really taken up seriously by the unions themselves.

JAISAL NOOR: Lois Weiner, thank you so much for joining us. Director of urban education and the teacher unionism policy project at New Jersey City University. Thanks so much.

JAISAL NOOR: For joining us at the Real News Network.