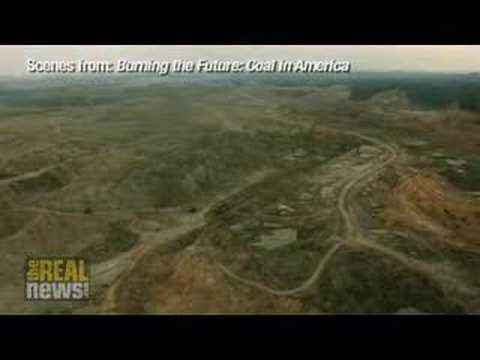 Scenes from: Burning the Future: Coal in America

ROGER LI LLY, WALKER MACHINERY: We really need to make people understand the importance of coal, that it’s not the dirty old fossil fuel of the past.

JOHN KERRY, US SENATOR (D-MA): There’s an abundance of coal. Yes, we want to be able to try to burn it, but you’ve got to burn it clean, and that means you’ve got to push the clean coal technology.

NEWT GINGRICH, FORMER US CONGRESSPERSON: I’m for an incentivized market where, for example, we have very substantial tax credits to go to a clean coal technology.

ZAA NKWETA, PRESENTER: Coal is embracing a new, green image. With a proposal of new clean coal technologies, carbon emitted by coal-burning power plants may one day be captured and stored underground. But for many living with the environmental consequences of coal extraction and processing, clean coal is a myth. David Novack’s documentary, Burning the Future: Coal in America, tells a story of mountaintop-removal coal mining and its ecological impact on Appalachia. This process is cheaper and faster than traditional extraction methods, but is reported to have extreme environmental fallout. We spoke to David Novack to learn more.

DAVID NOVACK, DOCUMENTARY FILMMAKER: In the hills of West Virginia, southeast Kentucky, parts of Tennessee and Virginia, there’s an enormous amount of coal mining. And in West Virginia alone, 40 percent of the coal mining comes from a relatively new method of mining called mountaintop removal, which is perhaps the biggest environmental catastrophe going on in the United States today. In order to mine this coal, which is in the higher elevation seams within the mountains, the easiest, cheapest way for the industry to do it is to literally blow up the tops of the mountains. What they do is they clearcut the trees, those trees are dumped into valleys, and then they plant explosives into the rock and blast the mountains until the rocks all come apart. They push those off the edge into the valleys below, exposing the coal seams, and then just go in with bulldozers and pull out the coal. There’s no topsoil left. It’s impossible for any trees of any significance and plant life to grow there.

WOMAN: Common sense tells me when you turn a mountaintop into a barren wasteland, to be honest with you, there are some things going to happen at the bottom of that mountain.

Many of the minerals, the heavy metals that are by nature bound within these rocks, have now been released from the rock. And as water flows through there when it rains, it’s picking up these heavy metals, including arsenic, manganese, magnesium, mercury, lead, and it actually carries it right down into the water supply. They have removed about 700,000 to 800,000 acres in Appalachia for this kind of mining, and it’s slated to be about 1.4 million with the permits that are currently underway. Underground mining doesn’t contribute to this horrible devastation of the mountains, and it employs a lot more people. However, coal still needs to be cleaned. It goes through a mechanical and chemical cleaning process, which, ironically, is in place to help it satisfy the Clean Air Act requirements. That process creates billions upon billions of gallons of a toxic slurry, a sludge that is stored in the mountains all over the coal mining areas. There are no requirements for those impoundments to be lined the way we typically think of a toxic landfill. It gets into the groundwater. So nowhere through the extraction process can one argue that coal is clean or can be clean.

MAN (VOICEOVER): We have about 130 active slurry impoundments in West Virginia that contain over 110 billion gallons of slurry. That’s just West Virginia. Equal number in Kentucky, plus Tennessee, Virginia, Pennsylvania, then out into the Midwest, into Ohio, Indiana, and Illinois. These impoundments represent a legacy cost of burning coal as a fuel.

The state department of environmental protection is very much in the pockets of the coal industry. And the EPA, which is the federal governing board over this, doesn’t seem to have any power or the desire for any power in that area. The coal industry has ruled politics in West Virginia and southeast Kentucky for 100 years, and it’s not new. And right now, King Coal is very, very much alive. The coal industry has launched a massive campaign, trying to convince the country and those with power in the country in Washington that coal is clean. They have bought, I believe, $35 million worth of advertising on national television. The CNN presidential debates were sponsored by the Clean Coal lobby. I think the coal industry recognizes that if the US is going to get serious about dealing with climate change, that coal is going to be the first place that they go, and as a result they’re working very hard to convince the government and the people that coal is clean.