Why the Juggalos Marched on Washington

The FBI says fans of Insane Clown Posse are a violent gang, but those fans think they're being targeted because of class prejudice

The FBI says fans of Insane Clown Posse are a violent gang, but those fans think they're being targeted because of class prejudice 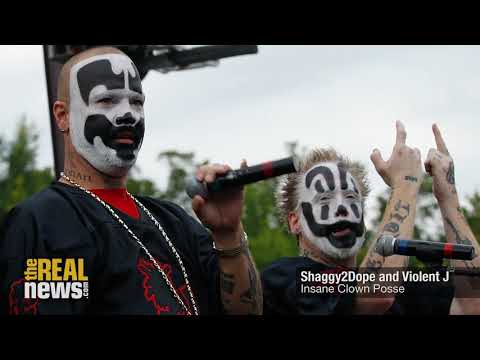 DHARNA NOOR: And we’re here at the Juggalo March on Washington for the Real News Network.

DHARNA NOOR: Over 1,000 fans of the horrorcore rap group, Insane Clown Posse, fans who call themselves Juggalos, gathered on the National Mall on Saturday for the Juggalo March on Washington.

EZE JACKSON: Where you here from today?

AMANDA KEBBEL: I’m here from Pennsylvania, and it was a really far trip, like four hours I had to drive.

DHARNA NOOR: Juggalos came from all over the country, not just to see the group’s much anticipated performance, but also to protest the inclusion of Juggalos in a 2011 Justice Department gang task force report.

KEVIN GILL: They listed Juggalos as equals alongside highly dangerous, and elaborate international criminal organizations, like the Crips, the Bloods, and MS-13. They then took this bullshit report and circulated it to every law enforcement organization in these United States.

DHARNA NOOR: The inclusion of Juggalos in the report was dismissed in 2014, but is currently being appealed, and to that the Juggalos said:

RICH “RAIDERLO”: Dude, this is starting with ICP fans, who could me next? Man, it could KRS-One fans, could be it fans of Onyx, who could be next? Man, ’cause for real, this is a human rights issue, dude. This ain’t just about rapping clowns or they fans or whatever. This is a human rights issue, dude. Because if this is gonna be happening, what could be next, man?

DHARNA NOOR: We spoke to Juggalos about their love of Insane Clown Posse, or ICP.

DHARNA NOOR: Many talked about the consequences they faced for expressing that love with fan symbols, like the Hatchet Man.

EZE JACKSON: Do you know anybody personally that’s been targeted, or attacked by police?

RICH “RAIDERLO”: Actually, yes, yes, yes. Because of this whole thing, most definitely, man. Because I’ve spoken with friends, especially over in the Bay area, some actually have been profiled just because they saw the Hatchet Man or whatever. Constantly like asked questions, you know, gotten pictures of the tattoos taken by the police and everything. It’s just unfair treatment, all just because of the music they listen to.

DON ANDREWS: Shit, I’ll put it this way. I got a Hatchet Man on my car, and I had the police follow me to my house, pull me over for a broken taillight, and they came out with guns. Luckily I just got off work, so I had a nice white button up, slacks, I was polite, I was like, “Look, you know, just gotten off work,” but it’s just the idea that for a broken taillight you’re gonna come with guns out? It gets really scary, you know.

HEATHER TILLET: Like I said, I’ve been pulled over a couple of times, strictly for the Hatchet Man. What are you doing, where are you going, why are you here? For no reasons. And then I’ve had some run ins, like I said. I’ve had cops kind of harass me a little more than they might’ve had they not seen my Hatchet Man tattoos, had I not been wearing an ICP shirt.

DHARNA NOOR: Others said that affiliation with Insane Clown Posse has caused people to be dishonorably discharged from the military, and has caused problems in getting child custody. Many Juggalos spoke of their experiences growing up poor and socially rejected.

What do you think that being a Juggalo is about?

MOON BROWN: I mean, honestly, really it’s like a support group. All of us came from a more rough lifestyle. I grew up homeless, I was homeless at 14 because of the foster care system. Juggalos were actually my family. I had an abusive childhood in a crap foster care system, so the first family experience I ever had was Juggalos. I would not be alive if it wasn’t for Juggalos.

MICHAEL CLINE: But I don’t only just like the music, I identify with it.

DHARNA NOOR: Insane Clown Posse’s music is often criticized as needlessly violent and gory. We asked some Juggalos about this characterization.

MICHAEL CLINE: I identify with the way most of these people grew up, the way Jay and Shaggy grew up. I grew up very much the same way, my dad was never in the picture, my mom was always at work, she had to support us by herself. When you listen to the songs, most of the horror is … When they are talking about killing people, they’re talking about hunting down deadbeat dads. They talk about hunting down pedophiles.

AMANDA KEBBEL: When you have nothing left, and then people try and take the Juggalo away from you. I personally was bullied in school, like I had no friends, I had nothing in my life. Finding the Juggalo community really helped me with my life and how I set things up. It’s a lifestyle, it’s not a gang.

DHARNA NOOR: It wasn’t just Juggalos who marched. The rally garnered support from political groups too, like the local chapter of the Democratic Socialists of America.

NIKKI TREMBLAY: I’m not a Juggalo myself, but I think it’s really shit that they’ve been labeled a gang just for listening to a type of music.

DHARNA NOOR: There have been some cases of violence at the hands of Juggalos. In 2008, two self-identified Juggalos killed a homeless man in Washington State. In 2012 a Juggalo in Las Vegas committed murder by meat cleaver. But at the march, many said they thought there was another reason the FBI labeled Juggalos a gang. Juggalos are often stereotyped and demonized as white trash, and many thought that helped the FBI demonize them, too.

EZE JACKSON: Why do you think the FBI has labeled them as a gang?

EZE JACKSON: Why do you think the FBI has the wrong impression of Juggalo family?

SHAWN ROSEN: Because they can pick on poor people and they can get away with it.

DHARNA NOOR: Just a short walk away, a pro Trump rally called The Mother of All Rallies was taking place. But the Juggalos far outnumbered them, and their message was clear.

KEVIN GILL: To end profiling of Juggalos and to give us back our fucking civil rights, and our First Amendment rights. Woop woop.