Bill McKibben: We Don’t Need A Bridge To Renewables

Seneca Lake activists and McKibben are fighting a proposed gas storage facility, which could cause irreversible damage

Seneca Lake activists and McKibben are fighting a proposed gas storage facility, which could cause irreversible damage 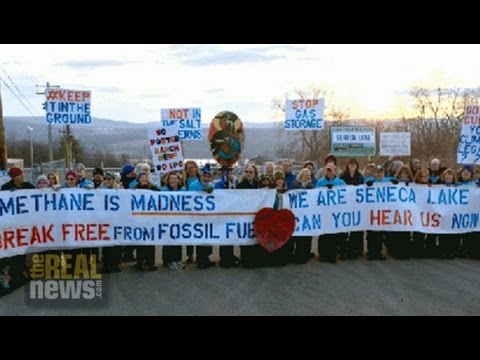 This week, 57 people were arrested at a protest in Watkins Glen, a village in central New York State. The protest was part of an ongoing series of acts of civil disobedience organized by the group We Are Seneca Lake. This group is fighting the proposed gas storage expansion in the salt caverns of Seneca Lake, facilities that are proposed by the energy company Crestwood Midstream.

Now joining us to talk about this fight is Bill McKibben. Bill was arrested at Monday’s protest. Bill is an author, an educator, and environmentalist, and a co-founder of 350.org. Thanks for joining us, Bill, it’s so good to have you with us.

BILL MCKIBBEN: A real pleasure to be with you.

NOOR: So, Bill, you’re an activist with national standing. You’re kind of a big name within the environmental activist community. What is it about this local fight that’s been largely off the radar of most media that made you want to join in, and even get arrested?

MCKIBBEN: Well, I guess sort of the hope that it might help put it on the map with media, because it’s an important fight, like so many other of these pipeline and coal port and other local fights that are going on around the country.

This one in particular is taking on fracking, and fracked gas. That’s what they want to store in these salt caverns underneath Seneca Lake. Many of the protesters, of course, rightly are concerned about its effect on the local community, what it will do to that lake. But there are also broad, broad concerns from a lot of us about what fracking is doing to the global atmosphere, and to the temperature of the planet. It’s emerging to be the methane that leaks out of operations like this one is now joining carbon dioxide as the evil, its evil twin, the other thing driving the record climate change that we’re seeing.

NOOR: So we want to take up both of those things, the local implications and also the broader picture of what fracking, what the implications of fracking will be. So Seneca Lake is a source of drinking water to hundreds of thousands of people. How exactly will the surrounding communities be affected if this gas storage facility is actually built?

MCKIBBEN: Well, I think the real answer is, and the devastating answer, is no one knows for sure. But there is plenty of reason to think, salinity levels were already increasing in the lake, that it’s underground geology, the geology that underlies this deep, beautiful lake, is being compromised by this plan. And that’s why local people are upset.

Look, their economy is mostly based on the lake, surrounded by some of the finest wineries on the continent. It’s a prime agricultural landscape and a big tourism draw. And that’s far more economically important than the fossil fuel industry’s, you know, hopes to get another few years out of its current business model.

NOOR: And to speak about fracking more broadly, recently in the news there was Obama’s clean power plan, which was blocked by the Supreme Court. That actually calls for natural gas as a way to steer away from reliance on things like coal. So should fracking, and thereby the storage of its byproducts, in any way be used as a bridge to clean energy?

MCKIBBEN: That’s what people used to argue. That was before people fully understood just how much methane is leaking out, and we now think that fracking for natural gas is at least as bad as burning coal. The good news is we no longer really need a bridge. Renewable energy is ready to go. The price of a solar panel has dropped 80 percent in the last eight years. The team from Stanford’s given a remarkable set of documents about precisely how New York State and indeed all the other 49 states could go entirely renewable at affordable prices by 2030.

NOOR: And this all comes at the time when the National Oceanic and Atmospheric Administration has announced that this winter was the warmest in U.S. history ever recorded. Can you talk about these actions against Crestwood in this larger context, especially with these sources of natural energy that you’ve been talking about. Why is it important that we act right now?

MCKIBBEN: We’re way behind in the fight against climate change. I mean, we’ve just come through the hottest year on record, and it looks like this year may beat it, globally. Sea ice in the Arctic is at a record low for the date. We’ve just seen the highest wind speeds ever recorded in the Southern Hemisphere with that hurricane that flattened Fiji. On and on and on and on.

If we don’t get action quickly, these questions will be moot. We will have lost the battle around climate change. That’s why it’s incredibly good that people are willing to, some of the time, stand up and go to jail to try and draw attention to the fix that we’re in. Those people in Watkins Glen have brothers and sisters all around the world who are doing the same sort of things. And together–well, I can’t guarantee we’re going to beat climate change. It may be too late for that. But I can guarantee that we’re going to give it a serious, serious fight.

NOOR: Well, Godspeed, Bill, and thanks so much for being with us today. We hope to have you on again soon.

NOOR: And thank you for joining us on the Real News Network. 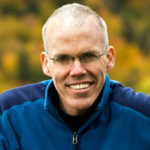 Bill McKibben, a well known environmental author and activist, is the founder of 350.org, an international climate change campaign. 350.org is named for the safe level of carbon dioxide in the atmosphere, 350 parts per million. This October 24, Bill and 350.org are coordinating an International Day of Climate Action to call for a strong…