Tom Hayden on the Obama-Biden Ticket

With the Democratic National Convention in full swing, Tom Hayden believes that Senator Joe Biden "will not be a progressive element on Senator Barrack Obama" and that his selection as Obama's running mate is not "a step in any direction." Hayden goes on to state that, "the democrats are in danger of decoupling the war from the recession and high oil prices."

With the Democratic National Convention in full swing, Tom Hayden believes that Senator Joe Biden "will not be a progressive element on Senator Barrack Obama" and that his selection as Obama's running mate is not "a step in any direction." Hayden goes on to state that, "the democrats are in danger of decoupling the war from the recession and high oil prices." 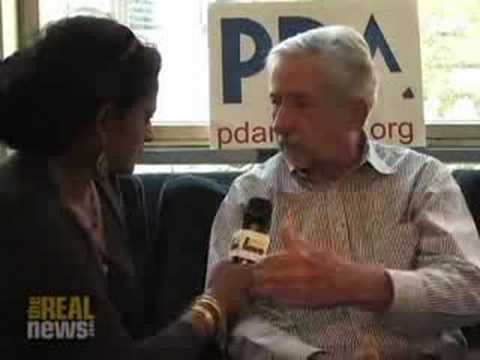 SHARMINI PERIES, JOURNALIST, TRNN: I’m joined by Tom Hayden, who is a long-time journalist and antiwar activist for 40 years or more. And, Tom, I really want to explore with you the Biden-Obama ticket. Is that the best hope for change in terms of the wars that are currently underway in Iraq and in Afghanistan?

TOM HAYDEN, AUTHOR AND ACTIVIST: Well, I would have preferred Obama-Clinton. I’ve always been for Obama. But Machiavelli says keep your enemy closest. So Obama should have brought the Clintons in. Now they’re free players, and God knows what will happen. Does Biden add anything? If he gets a state, fine. You know, Kennedy picked Johnson and got Texas, and the rest was history. I don’t know if Biden can bring a state. He’s got a lunch-bucket image, friendly guy. He’s changed his position on many issues. We don’t know what the Republicans will dig up. He was wrong on Iraq in ’02, but then, even worse, he advocated partitioning and slicing up Iraq and destroying it, turning it into three countries. Then, when he realized he had to run for president in Iowa, where there are no defense plant workers and everybody’s for peace, then he adopted a deadline. So he will not be a progressive pressure on Obama—somebody else will have to do that. So what you’re left with is: does Joe Biden bring in Pennsylvania? Otherwise, well, maybe he’ll serve to criticize McCain; maybe he’ll do well in the debate. Who knows? I don’t think it’s much of a step in any direction.

PERIES: So in your panel this morning, you were actually proposing a staged antiwar movement. So you said let’s get Obama elected first. So what’s the second stage?

HAYDEN: Well, it’s not my wish to go in stages—it’s the reality of my life. So we have 70 days. I don’t know why we’re talking about anything else. You’re either for Obama or you’re not, and if you’re not, good luck talking to the black community or the Latino community or trade unions in 2009. But we should be able to chew gum and walk: you can vote for Obama, and you can still demonstrate, leaflet. For instance, on September 20, there’s a huge antiwar door-knocking campaign called A Million Doors for Peace, which is an attempt to spread the peace and justice message—not for Obama, simply to keep it in the public mind. So it’s possible to do both, but there are priorities. When you get close in elections and they’re right around the corner, you have to decide, given your limited energy and resources, what are you going to do for the next month and a half of your life or two months. The stages are these. McCain and Bush are tied together in their opposition to a deadline for withdrawing combat troops. They have long argued that deadlines are inappropriate, a sign of weakness. Obama is for a deadline. I understand it’s only for combat troops and it’s 16 months, but it’s a clear difference. And Obama, the supposedly inexperienced candidate, is backed by the Iraqi prime minister that Bush put in office, Nouri al-Maliki. So the antiwar movement set the stage for Obama to support a deadline. That’s historical fact. Obama has now set the stage for a debate over a deadline with Obama and the Iraqis in agreement. In fact, the Iraqi prime minister said the sooner the better. And Bush and McCain are talking about horizons like they’re on some drug—no deadline, no deadline. So I think that’s a very important point. Secondly, the Democrats are in danger of decoupling the war from the recession and the oil prices. We have to go right at them that it’s the Iraq War that has taken $1 trillion to $3 trillion out of our economy, and it’s the Iraq War that has allowed the oil companies to get back into those oil fields. And the antiwar movement has to create ways to force these issues into the discussion. If we do nothing, the discussion will move to the right. If we do something, there’s a hope that we can trigger a clarifying debate between Obama and McCain.

PERIES: Also in the panel you said that Obama doesn’t have enough antiwar advisors around him. Why is that? And what can the movement do to change that?

HAYDEN: Well, I think that Michelle Obama and the speech writer, the young man, are probably the antiwar advisors. There are no antiwar advisors who have national security credentials. It’s one of the diseases of our state that to be a “national security expert,” quote-unquote, you have to have been wrong on several wars, apparently, but you had to go to Georgetown, and you had to do the right PhDs, and you always approached things from the narrow view of America’s interests. So these 300 advisors, none of them are frontally against American foreign policy. They are against the Iraq War because it’s gone sour, and that’s a small distinction that is important. The debate is between one set of advisors who think we should go farther—the McCain advisors—and another who think we should cut our losses and redeploy and refocus—that’s the Obama advisors. That’s not a broad enough debate. We need a populist debate, we need an antiwar voice, and it has to come from the voters and from other politicians who are hearing the pressure of their voters, the Out of Iraq Caucus, and so on.

PERIES: One last question to you, Tom. Is there a hope for a more rational foreign policy, particularly towards war with the Obama-Biden ticket?

HAYDEN: Oh, I think Obama and Biden, particularly Obama, are more rational, cool, you know, subject to arguments back and forth. It’s a little like when, I remember, John Kennedy was elected. We were very, very unhappy, ’cause he ran supporting the Green Berets and he invented a fake missile crisis against Nixon, then he implemented the Bay of Pigs, and he learned the catastrophic problem of depending on your advisors, who are not your friends. They are there to perpetuate some of their interests, and they’re using you. And he became much more of a civil-rights and pro-peace president through that experience before he was murdered. And I would hope that Obama doesn’t have to go through the same experience.

PERIES: Thank you very much, Tom.

Tom Hayden is an American social and political activist and politician, most famous for his involvement in the antiwar and civil rights movements of the 1960s. Hayden served in the California State Assembly and the State Senate. His books include Rebel: A Personal History of the 1960s; Ending the War in Iraq.

5 Alarm Fascism: Trump’s Burning it All Down