Robert Kennedy Jr.: 'Coal is dirty and destructive in every aspect of its production and burning'

Robert Kennedy Jr.: 'Coal is dirty and destructive in every aspect of its production and burning'

Coverage of the DNC 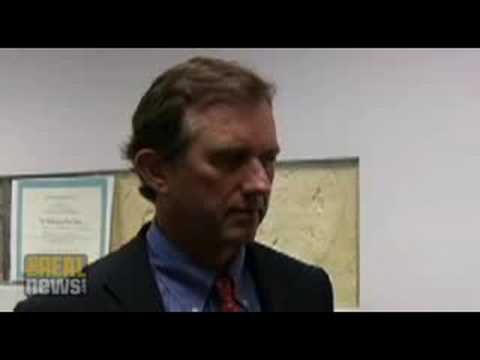 MATTHEW PALEVSKY, TRNN REPORTER: I’m standing with Robert Kennedy Jr., who just gave a panel here about clean coal. Now, Dr. Hansen of NASA, one of the first people to come in front of Congress and say global warming exists, said the first thing that has to be done is a moratorium has to be created on new coal plants. And yet neither candidate has taken up that issue. Both say, well, we should have clean coal. Is there such a thing as clean coal?

ROBERT KENNEDY JR., ENVIRONMENTAL LAWYER: No, there’s no such thing as clean coal. Theoretically you can clean up parts of the coal process, but coal is dirty and destructive in every aspect of its production and its burning, and we have much cheaper forms of energy. Coal is only cheap if you ignore all the externalities, if you ignore the fact that today in 19 states it’s now unsafe to eat any freshwater fish because of mercury contamination from coal plants. In 49 states, at least some of the fish are unsafe to eat. What is the cost of that to the public? What is the cost of the million asthma attacks that ozone and particulates from coal plants cause every year? A million lost workdays. Sixty thousand deaths a year from coal-burning power plants, from bad air. The acid rain which has destroyed the forest cover on the high peaks of the Appalachians from Georgia to northern Quebec, that has acidified one-fifth of the lakes in the Adirondacks. Those are all parts of the cost of coal, plus the carbon that’s coming from the coal. And, of course, there’s all these government-subsidized programs that try to sequester the carbon, but it’s not going to work. And why should we be subsidizing, giving more subsidies, to one of the most highly subsidized industries in the world? Also, you know, probably the highest cost of coal is the destruction of the Appalachian Mountains, which are never going to come back. These are the most biologically diverse ecosystems in the world, and it’s not going to come back.

PALEVSKY: There’s a large advocacy organization here—there’s a large lobby organization for clean coal. It’s a conglomeration of all the coal industries that put their money behind it. And they have advertising, they have people on the ground, they’ve been in all the big primary states. They’re fighting a battle to convince people that coal is necessary if we’re going to be dependent on our own energy.

KENNEDY: It’s a lie. We have much cheaper energy sources in this country that are much less environmentally damaging [inaudible] clean. We have the best solar energy. We have enough solar in 19 percent of the most barren desert lands in the Pacific southwest to supply all of the energy needs in our country, even if every American owned an electric car. The Midwest, the Saudi Arabia of wind: if we were invested in a fraction of the money that we’ve invested in subsidies to coal in wind power, in extending our transmission lines to capture the wind in Montana and North Dakota and Texas we could supply all of our electric needs in this country from wind. You know, and in storage, we have the storage technology today. We have all the technological answers beat. We know how to do it. The myth is that there’s such a thing as clean coal. That doesn’t exist.

PALEVSKY: You said earlier today that we let the tobacco companies convince us for five decades that cigarettes were good for the American people, that companies have that power and lobbyists have that power. How do we prevent the coal industry convincing us that coal was not bad for the environment and that it’s a good alternative to, you know, it’s a good choice for our energy?

KENNEDY: Well, you know, these are what I call the incumbents: oil and coal and nuclear energy. They’ve been able to use their political power, the huge amounts of money that they have, to capture the political process. They put hundreds of millions of dollars into basically making half of Congress their indentured servants on Capitol Hill. They have a gigantic lobbying effort, which if you walk two blocks here you’ll see—you know, you’ll see all these clean coal advertisements. And it’s hard to go up against that, but that’s what we have to do if we’re going to take back our country. And now we have allies, because there is a clean-tech industry out there that can provide energy a lot cheaper than coal and a lot cheaper than oil. And so we have not just a bunch of environmentalists, who can be marginalized as, you know, fringe characters, but there are people from blue-chip companies, from Fortune 500 companies, and from green-tech venture firms. Now 10 percent of the venture capital in this country is now going to green tech. That’s going to create a big economic interest in this country that is going to start fighting back against this myth of clean coal.

PALEVSKY: Are we going to see it first from the private sector? Or do we need a political leader?

KENNEDY: You’re seeing it from every sector. But, you know, we need it. We need a political leader out there who’s going to be able to say, who’s going to be able to parse for the American public what the difference is between, you know, the old carbon, the old energy, and new energy. Old energy is carbon that has been stored in the earth, and it hit the earth millions of years ago or hundreds of millions of years ago. It’s stored; it’s dirty; it has to be extracted; it’s very environmentally destructive. It then has to be transported. Then you have new energy, which is the electrons that are hitting the earth for free every day, that can be easily harvested and put in transmission lines if we have the infrastructure to do it—a lot cheaper than coal or oil. And we’re already hitting an era when, even with all the subsidies going to coal or oil, you’re seeing the capacity of solar and wind to compete against them head-to-head. And if we had a level playing field, coal and oil would be out of business in a couple of years, ’cause they’re so expensive compared to wind and solar if their externalities are included. And that’s what we need to do, to continue to ratchet it up, to get rid of the subsidies, to continue to force them to pay for their externalities. And when that happens, they’ll be blown out of the marketplace.

PALEVSKY: Given that conviction, are you disappointed that Obama hasn’t taken this on more forcefully?

KENNEDY: I think he’s going to take it on more forcefully.

Robert F. Kennedy Jr. is an environmental lawyer and co-host of Ring of Fire on Air America. He has written several articles on environmental issues that have appeared in major US newspapers and is an author of several books including Crimes Against Nature.