Despite Report on Spate of Killings, Police Reform in Jeopardy 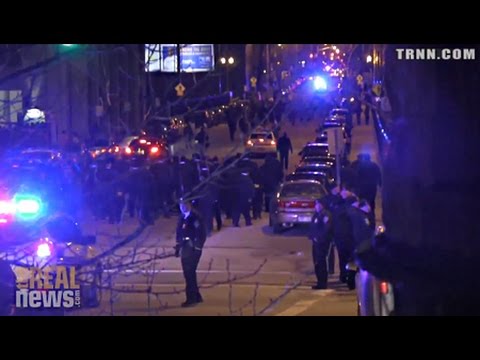 STEPHEN JANIS, TRNN PRODUCER: Hello. My name is Stephen Janis, and I’m an investigative journalist reporting from Baltimore for The Real News Network.

Two thousand fifteen was supposed to be the year of police reform in Maryland. National events like the shooting of unarmed teenager Michael Brown in Ferguson and the death of Eric Garner in New York, along with several incidents here in Baltimore, all seem to point to the possibility that police reform efforts would succeed in Annapolis. Particularly with a series of substantive bills in play, advocates for reform were optimistic, among them an overhaul of the Law Enforcement Officers’ Bill of Rights and changes to the criminal code that would make it easier to fire officers who have been convicted of a crime.

But now it appears many of the proposals may not make it out of committee as we’ve learned that the powerful Judiciary Committee is contemplating not voting on them at all.

Joining us to discuss this possibility and its implications is one of the key advocates for reform, who’s been working in Annapolis on behalf of several bills. Dayvon Love is a policy director for the Leaders of a Beautiful Struggle and strong advocate for reform of the policing process Maryland and across the country.

Thank you for joining us.

DAYVON LOVE, DIR. OF RESEARCH AND PUBLIC POLICY, LEADERS OF A BEAUTIFUL STRUGGLE: I appreciate you for having me.

LOVE: Well, the primary proposal that we put forward, that we’re a supporter of, is House Bill 968. What this is is a package of reforms to the Law Enforcement Officers’ Bill of Rights, which was codified in the 1970s as an agreement between legislature and law enforcement that provides certain rights and privileges to law enforcement.

Currently that board is made up of just all law enforcement. So we will want people in the community not in law enforcement to preside on that board. So those are examples of the alterations that we’ve been pushing forward. The Fraternal Order of Police has been vigorously against any police reform. And what we’re hearing is is that there are multiple bills that actually have been killed, one of which is the mayor’s bill, House Bill 363. So that bill was killed in committee.

JANIS: Was that the bill that would have created a criminal charge? It would have–.

JANIS: And that bill’s been killed.

JANIS: That bill was killed. So what are you hearing about your specific proposals?

LOVE: So 968 is being tabled. So, currently they’re not going to vote on it. But my understanding is is that they’re going to attempt to not move it at all out of the committees.

JANIS: So, effectively killing it.

JANIS: So this year really seemed like you had momentum. You organized. Your organization was organized. What do you think happened down in Annapolis that has created this issue?

JANIS: And one of the things I noticed–I covered the mayor’s testimony for her bill that was, I guess, killed was that there seemed to be a lot of misunderstanding, or even to a extent certain misinformation about what these reforms would do. Did you notice any of that while you were going through this process?

LOVE: So there are kind of two things at play. One is I think people are–people have general concepts of what police reform is. And so what happens is there’s a bunch of stuff that gets lumped together that isn’t necessarily the same, so the mayor’s bill. The mayor’s bill is primarily a tool that would be given to the administration in order to be able to have more flexibility in disciplining officers.

To me that doesn’t really get at the heart of the problem, ’cause really the problem is about community folks being involved in the process of administering policing in their communities. So what you have is you have kind of a broad swath of bills about independent prosecutors prosecuting police brutality cases, body camera legislation. So you have all these different pieces of legislation. And so I think what has effectively happened is that the FOP has been willing to just kind of cast all those reforms as the same, but also characterize them as anti-law enforcement. And that’s really been the biggest discursive rhetorical tool that the FOP has used.

JANIS: Well, you’ve talked about this a lot. Why is it such an effective rhetorical tool to say you are anti-law enforcement, you are anti-police? I mean, especially in a community that has had so many issues with police, why does that argument work at all?

LOVE: Well, I think there’s a certain dog whistle element to it in the sense that it triggers the sensibilities of those communities that traditionally haven’t had problems with the police. So you think about pretty wealthy, predominantly white committees in Baltimore, for instance, where police behave differently in those communities and really rely on, at least as far as they’re concerned, rely on police to protect their communities from these pathological predominantly black communities and the way that they were representing [incompr.] And so what you–so they’re triggering that, which then creates, I think, the basis for their support. You know, it helps to really drive up their support and to be able to take attention away from the issue of police brutality and put it back on, particularly, protesters, people who demonstrated, to put the onus on those folks instead of putting the onus on law enforcement and their behavior.

JANIS: Well, given how acute the momentum seemed to be, I mean, what does this seem to say in terms of going forward with any sort of ability to, I think, execute meaningful reform? I mean, how do you assess the future?

LOVE: Well, I mean, I think there does need to be consistent and sustained pressure. I think a part of why they’re attempting to table 968 instead of just flat-out killing it is for political cover. I think legislators kind of feel like they’re in between two very volatile constituencies in terms of the demonstrators or folks that have been–like myself that have been going to Annapolis to push and the FOP. And so it’s a very politically kind of touchy situation for a lot of the legislators. So I think that’s–so I think sustained pressure is going to be what creates a possibility to move things forward.

But I think also there needs to be some further investigation and consciousness-raising around how law enforcement operates, ’cause I think most people don’t know the extent to which law enforcement is very insular from the community in terms of its practices and procedures.

JANIS: So you’re not totally giving up on. You say you have something planned possibly for April. Can you discuss that a little bit for our audience?

LOVE: So talk to, you know, a few other folks that have been involved in organizing around this issue. And so there are some folks that are thinking about doing some kind of rally, maybe even potentially some civil disobedience, you know, still in the process of trying to plan that out, potentially on the third, which is actually a good day if you think about, you know, it’s Good Friday, you think about the metaphor of Christ being crucified, you think that that as lynching, if you think about police brutality as a part of that legacy of the lynching of African-descendent people. And so, yeah. I mean, there are a lot of folks, even though it isn’t good news that they’ve tabled the bill, I think there are people that really want to push this legislature to have to do something.

My name is Stephen Janis. I’m an investigative journalist for The Real News Network reporting from Baltimore.

Dayvon Love is Director of Research and Public Policy for LBS. Dayvon is a resident of Northwest Baltimore City and graduate of Towson University majoring in African and African American Studies. This was the first time in history that an all black team won the tournament. Dayvon has a lot of experience with grassroots activism…