Is This What Voluntary Corporate Social Responsibility Looks Like?

Dimitri Lascaris on the case against Nevsun Resources, a Canadian mining company whose appalling labour record in Eritrea was brought to court by a consortium of Canadian Law firms

Dimitri Lascaris on the case against Nevsun Resources, a Canadian mining company whose appalling labour record in Eritrea was brought to court by a consortium of Canadian Law firms 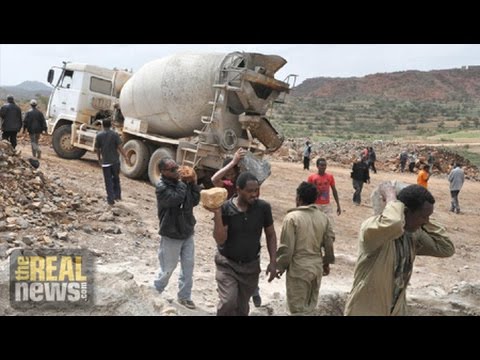 Canada is a big player in the global mining industry. According to the Canadian government’s Department of Foreign Affairs, Trade and Development, in 2013 Canadian headquartered mining and exploration companies accounted for nearly 31 percent of global exploration expenditures and 50 percent of the world’s publicly listed exploration and mining. These 1,500 companies had an interest in some 8,000 properties in over 100 countries around the world.

One such mining company, called Nevsun resources, has a single operating gold mine situated in Eritrea. Let’s have a look at a company promotion video for the mine to attract investors.

VOICEOVER: The Bisha mine in Eritrea–a partnership between Vancouver-based Nevsun Resources and the Eritrean government’s mining company, known as ENAMCO, a joint venture that produces high-grade gold, silver, copper, and zinc.

CLIFF T. DAVIS, CEO, NEVSUN RESOURCES LTD.: Well, the Bisha mine is the only producing mine in Eritrea, and it plays a very important role in the Eritrean economy. And we’re proud to say it adds significant tangible benefits to the people of Eritrea.

VOICEOVER: After decades of struggle, Eritrea won its independence in 1993, and the Bisha mine, the first and only modern mine in the country, is playing a big part in helping create opportunity, prosperity, and self-reliance.

PERIES: Now a Consortium of Canadian law firms, including Siskinds, have commenced a representative action in the courts of British Columbia against Nevsun’s resources, and their client is the mine workers.

Now with us to discuss the issue is one of the lawyers pursuing the lawsuit, Dimitri Lascaris. Dimitri is joining us from Quebec City, and he is a partner with the Canadian law firm of Siskinds, where he heads the firm’s securities class actions practice.

Thanks so much for joining us, Dimitri.

DIMITRI LASCARIS, SECURITIES CLASS ACTIONS LAWYER, CANADA: Thank you for having me, Sharmini.

PERIES: So, Dimitri, begin by telling us about Nevsun Resources and the case you’re pursuing.

LASCARIS: So Nevsun, as I think you indicated, is a TSX-listed mining company. It’s based in Vancouver, but it has one single operating mine, a goldmine, in Eritrea, a country that’s not particularly well known to people in the West. It’s an extraordinarily poor country. It’s in Northeast Africa. It borders on Sudan and Ethiopia. It was in conflict with Ethiopia for an extended period of time.

And this company, Nevsun, in 2008 began to develop a mine at a place called Bisha. And it did so in partnership with a company that is owned by the state. The state is a one-party state. It’s never had elections. There’s no constitution. There’s no independently functioning judiciary. It’s run by a party which is ironically named the People’s Front for Democracy and Justice. And at the time when nevsun entered into this partnership, which effectively confers upon it indirectly a 60 percent interest in the mine with a 40 percent interest to the state-owned entity, it was widely known, primarily through the efforts, the investigative and reporting efforts of reputable human rights organizations like Amnesty International, that this regime, the People’s Front for Democracy and Justice, was a widely employing forced labor throughout the country.

However, in 2002, the government effectively extended indefinitely the service of those who had been conscripted into the National Service program and forced them to continue to work for the government for subsistence wages, meager subsistence wages, through, basically, brutality and terror. And as a result of that, the government was able to employ forced labor–as I said, subsistence wages–in companies that were controlled by military officers or by the party, directly or indirectly. And two of those companies–one is called Segen, the other is called /mɛrɛb/–became contractors to the mine site or to the Eritrean entity that was jointly owned by the state and by Nevsun and for a period of years supplied workers, those two companies, to the mine site for the construction phase of the mine.

Our clients were three–the people who are actually named as plaintiffs in this representative action were three people persons who were enrolled in the National Service program and who allege that they were forced to work in the mine for a period of years against their will under brutal conditions. And they are now bringing an action putatively on behalf of all Eritrean nationals who worked at the mine from 2008 to 2012.

PERIES: Right. And how did these mineworkers get a hold of you? How did the case begin?

LASCARIS: Well, a very enterprising young lawyer who has a passionate interest in human rights became aware through a relationship with the human rights activist, an Eritrean human rights activist in the United Kingdom, in the plight of these workers, and brought that to my attention, to the attention of our cocounsel. And we then had to travel abroad to meet with them because they are refugees living in very difficult conditions outside of Eritrea. After a period of days straight, in which we interviewed them, they retained us to pursue this litigation in Canada on their behalf and on behalf of those who are within the putative class.

PERIES: Right. So this is representing the three workers. And it’s really a class-action suit because it’s on behalf of all the workers that had worked at the mine. Now, this is also precedent-setting in Canada. Is that so?

And the reason why victims of human rights abuses by Canadian extractive corporations are beginning to turn to the courts is because the government has basically failed to impose a regime upon this sector that is preventing these sorts of abuses happening. The government in question is that of the Conservatives, the Harper government. In 2009, at which point the government, I believe, was in a minority, it introduced something called the corporate social responsibility strategy. This did not impose any meaningful obligations backed up by an effective enforcement mechanism on mining companies. It simply was an expression of the company, of the government’s expectation that these companies, these mining companies operating abroad, would do so consistently with international norms, including international human rights law.

Activists for people who have been victimized by Canadian mining companies, through the good graces of a member of parliament and opposition at the time of the Liberal Party, brought forward a bill called Bill C-300, the responsible mining bill in 2010. And that bill was actually a very modest reform. It didn’t really impose meaningful penalties for violations of international law by mining companies. What it did was it set up a complaint process, which enabled victims to go to an ombudsman and lay out their case. And if the ombudsman decided that there was no basis to the claim, the reasons for the decision would have to be publicized. They’d have to be publicly available. And if there was a basis to claim, the government could potentially use its financing of offshore activity of mining companies as a weapon to force them into compliance. And this bill was, predictably, opposed by Conservative Party.

What was not so predictable was that the leader of the Liberal Party at the time, Michael Ignatieff, who was an Harvard academic for long time and I think who fairly described himself or who characterized himself as being a champion of human rights, at a very critical moment in the debate about this bill, expressed reservations about it. And a number of members of his party ultimately did not vote in favor of the bill, and it failed by six votes. So that modest effort failed.

And then we fast-forward to November of this year. The government, probably because there has been some pressure mounting about the activities of Canadian mining companies abroad, brought forward what it called its enhanced corporate social responsibility strategy. However, the key aspect of this remains the same. It is voluntary. It is merely an expression of the government’s expectation that there will be compliance with international norms by these companies. And ultimately there is no effective remedy offered within this CSR [CRS (?)] strategy for victims of human rights abuses.

And so now you’re seeing victims come forward increasingly to courts, and I think it’s going to be a growing trend in this country, because, frankly, the mining sector in Canada, it’s king in this country. It has a very powerful voice within policy circles, and it has an appalling record abroad. And litigation at this stage is probably the most effective option that its victims have.

PERIES: Right. Dimitri, thank you so much for joining us today, and we hope that we can follow the story along with you.

LASCARIS: Thank you very much, Sharmini.