From Argentina to Greece: The Legacy of Che Guevara 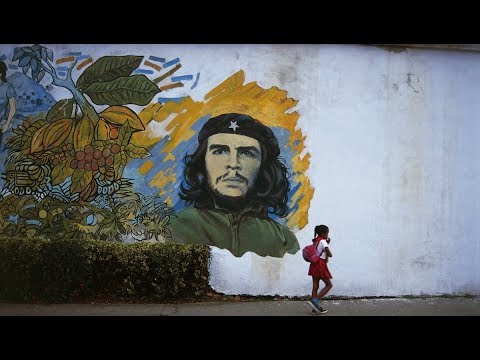 DIMITRI LASCARIS: This is Dimitri Lascaris reporting from Korinthos, Greece for The Real News. We have come to Greece to cover the ongoing effects of the financial crisis. We’re also in Korinthos this weekend to participate in a conference reflecting upon the 100th anniversary of the Russian Revolution. This is not only the month of October, 2017, the 100th anniversary of the Russian Revolution. It is also the 50th anniversary of the execution of Che Guevara in Bolivia by the Bolivian army. We have the great pleasure to be joined today by Che Guevara’s childhood friend Calica Ferrer. Thank you very much for joining us Calica. We also are being joined today by Thimios Kakos, a journalist in Greece, who happens to be making at this time a documentary about Calica Ferrer and Che Guevara. I thank you very much for joining us today.

THIMIOS KAKOS: The pleasure is all ours.

DIMITRI LASCARIS: Calica, I’d like to begin with you. The trip that you took with Che Guevara through Bolivia, Peru and Ecuador is thought by many to have been very important in the transformation of Che Guevara into a revolutionary. What happened during that trip in your view, which had this effect upon him?

CALICA FERRER: We saw a lot of contempt, disdain towards the indigenous. This happened in Bolivia. I’ll tell you an example: we were in a coffee shop and this two ladies and their families got in and sat on a table, they had a young indigenous girl with them and they made her sit on the floor. They then ordered their food and proceeded to feed the girl off the floor. And that was more of a symbolic thing, we had seen so many things, but that was telling. They had a subgroup of Bolivian Citizens assigned specially for domestic servitude.

Another experience that left a mark on both Ernesto and I was when we visited the Wolfram mine at the Illimani Mountain, by then the mines had been transferred to the government and we got invited.

So when we got there they showed us a small tower where the original owners of the mine had a machine gun, when the indigenous wanted better payment or working conditions they will randomly shoot at the crowd, including the workers and their families. But the most important thing was that we saw the bigger picture, that if a revolution had just taken place [1952], it was caused by the kind of things I just described.

The National Bolivian Revolutionary Movement (MNRB) led a revolution and had just decreed: the agrarian reform, the nationalization of the mines from private hands to state control, and the army was reduced too. The ones keeping order were the miners themselves, the main group within this revolution.

DIMITRI LASCARIS: After Che Guevara’s death, gradually over time the Latin American countries one by one rid themselves of dictatorships and gradually progressive regimes began to appear in places like Venezuela, the government that Hugo Chávez, Bolivia, Evo Morales, Lula in Brazil, but now in the last five to ten years, we’ve seen the forces of the right assault these governments and there has been a regressive movement back, perhaps not as bad as the way things were but a regressive movement back to oppressive elitist regimes of Latin America. It’s reputed that Che Guevara once said that “if you tremble with indignation, then you’re a comrade of mine.” Today, what leaders of Latin America would be comrades of Che Guevara?

CALICA FERRER: Without a doubt I know that Che Guevara would be happily supporting and helping: Evo, Lula, Venezuela’s president Maduro and all the leaders we have left, because there has been a [political] regression but not a total one, the seed has been planted.

Obviously [South] America’s landscape when Ernesto and I traveled, (Ernesto is how I call Che Guevara), there was a great number of dictatorial regimes, Somoza, Trujillo, Batista, Pérez Jiménez, Odría, in their respective countries, now that has totally changed.

And that demonstrates that we are improving. …Maybe we got hit by a counterattack, right? But we still go 3 steps forward and 2 back. There is always something left, always something left. Kind of like a boxer that’s winning the fight and all the sudden gets hit, he may be a bit shaken and have to go to the corner, but there he will recover and win the fight.

DIMITRI LASCARIS: Themios, I’d like to ask you about your film on Calica and Che Guevara. What inspired you to do this film and what has been the greatest surprise for you in the process of compiling this work, and what have you learned from it that you didn’t expect to learn?

THIMIOS KAKOS: Che Guevara is an inspiration to millions of people around the world; I am simply one of them. When I travelled to Argentina 2 years ago, without this being my motive, my dear friend Marta Silvia Dioz Sanz, a ‘Guevariana’ who has been living in Greece for 12 years, introduced me to Carlos Calica Ferrer. We were together during this trip, and in Alta Gracia, where Ernesto Che Guevara spent most of his life from the age of 12.

DIMITRI LASCARIS: I know we don’t have much time today gentlemen, so I want to just conclude with this question for Calica. The Greek people for the last seven years have had to endure a tremendous loss of sovereignty, the imposition of a very cruel austerity program, the abandonment in many respects of the most fundamental tenets of social democracy. What lessons, do you think, what are the main lessons that the Greek people should take away from the struggle that Che Guevara fought from his victories and from what you witnessed at his side?

CALICA FERRER: It is a tremendous responsibility to say even a few words in Ernesto’s name, but I can address that with my own personal thoughts. The Greek people can be at ease, it is just like we spoke before, a seed has been planted. It wanted to grow it couldn’t but it is dormant. Momentarily the perspective for the left is bad, but there are always “pillars” that will make it all improve. One last idea, it brings me joy to see how much of the world is celebrating the 100 years of the Russian Revolution.

THIMIOS KAKOS: Fifty years ago, they executed Che Guevara thinking that this way they would have him removed from the field of history; they accomplished just the opposite, because Che lives in eternity and will be a source of inspiration for the revolution to the people who are free-spirited worldwide.

DIMITRI LASCARIS: Thank you Calica. Thank you again Thimios. It’s been our pleasure to have you today. This has been Dimitri Lascaris reporting for The Real News from Korinthos, Greece.