The labor movement needs to provide a clear analysis of who is responsible for climate change, so that the powerful don't take advantage of crises to blame "the other," explains Sarita Gupta, the executive director of Jobs With Justice

The labor movement needs to provide a clear analysis of who is responsible for climate change, so that the powerful don't take advantage of crises to blame "the other," explains Sarita Gupta, the executive director of Jobs With Justice 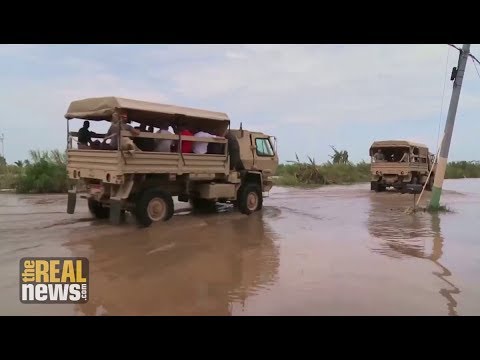 Dimitri L.: This is Dimitri Lascaris for the Real News in Silver Spring, Maryland. We are at the Labor Convergence on Climate organized by the Labor Network for Sustainability. I’m here today with Sarita Gupta, the executive director of Jobs with Justice. Thank you for joining us.

Sarita Gupta: Thank you. It’s great to be here with you.

Dimitri L.: I’d like to talk about the mission of your organization, and particularly how we can get organized labor leading the transition that we need to undergo in order to solve the climate crisis currently confronting us.

Sarita Gupta: Great question. I think that it is essential for working people and unions to be at the table and shaping the future of our economy, in particular in the context of this transition that we’re in the midst of. There’s so much crisis playing out for working people right now, and I often frame it as there’s three storylines that are playing out in the American public and for working people. One is of economic hardship and the inability of people to … Frankly, people are working harder than ever and can’t make ends meet. Then you have the story of the climate crisis that we’re in, as we hear more and more about the impacts of hurricanes, most recently Harvey and Irma, and so much more. The third is this. Who do we blame for all of this? More often than not, around the economy, the blaming plays out in the form of racism and xenophobia, and so this othering plays out.

I think it is so essential for the labor movement and for working people to actually understand at the end of the day that these stories are incomplete stories, because they don’t ever actually get at why are we in the situation that we’re in. Who is truly to blame, and how do we build enough power to shift the direction that we’re going in around the climate crisis and the future of our economy?

We are investing time and energy into figuring out how to work and build a grassroots base at the local level of labor leaders and trade union activists, who together want to do the kind of broad-based education and organizing, and really strategically looking at their industries and figuring out how to shape the future of their industries in ways that allow working people to be in the driver’s seat of what their sectors look like. There’s many examples of really tremendous work that’s happening, everything from waste workers out in California who are doing this to examples of healthcare workers who are really working hard to help their members, help healthcare workers, understand that there will be a bigger need for their services as we have more environmental health impacts of the climate crisis. How can they be part of pushing for the kinds of solutions that we need?

There’s multiple examples like that that are out there, and I think we want to be a part of helping seed those examples to both solve for the climate crisis and to solve for the issue of working people actually having the ability to come together and negotiate not only over their wages but conditions and overall well-being right now, that we really need bargaining power. We have to be clear about who holds that power and how we as working people really take the reins of shaping the future of those industries.

Dimitri L.: Based on some numbers I’ve seen, you’ve got quite a challenge, because for example I understand that something on the order of 32% of the members of the UAW actually support Donald Trump, who has claimed, whether he believes it or not is another matter, but he claims that the climate crisis is a hoax perpetrated by the Chinese. I would imagine that there is an educational task line before you that’s rather challenging. Why do you think that this significant portion of the labor movement is attracted to the rhetoric of Donald Trump, and how can you most effectively counteract that rhetoric?

Sarita Gupta: I think what I’m learning through our work locally is that often we try to engage people with lots of facts, and I think that’s true around the issue of climate. We get into the science, and we get into the numbers. When you do that, you lose people in that debate and discussion, versus really having a hearts and minds strategy. The issues of the climate crisis are actually impacting everybody. How do we start the conversation from the ways in which people are now experiencing the climate crisis?

For example, with Hurricane Irma happening in Florida, our local coalition in central Florida did worker surveys to get a sense of what were workers experiencing, especially low-wage workers, around being able to take time off to prepare for the hurricanes. Were they expected to work during the hurricanes? Were they retaliated against if they didn’t show up at work because of flooding, and whatnot? Because these are the important stories to uncover about how workers are truly being impacted by this crisis, and then how do we solve for those impacts and bring people into the conversation of what is a sustainable economy that works for both people and the planet in the future.

That requires creating the spaces for people to share from their own experience and then translate into what is really happening, and then what solutions we fight for. That’s actually how I think we deal with the issue of so many union members who are swayed by what Trump has to say. We have to fundamentally help people understand that this is bigger. Frankly, in some ways this is bigger than politics. It’s really about what the future holds. What’s the restructuring of the economy going to look like? How do we ensure working people are actually respected and can live with dignity? How do we hold onto our humanity through these changes? We have to get people at their values proposition versus politics and the issue. That doesn’t connect to who they are at heart.

Dimitri L.: Thank you very much for joining us today, Sarita. I know you want to go back to the panelists, and we really appreciate the time you’ve taken to speak with us.

Sarita Gupta: Thanks so much. Appreciate it.

Dimitri L.: Thank you. This is Dimitri Lascaris for the Real News.