Will Brexit Lead to Grexit?

Dimitri Lascaris says so-called leftist or socialist governments throughout the EU are engaging in self-immolation by embracing austerity, and then become wildly unpopular with the electorate

Dimitri Lascaris says so-called leftist or socialist governments throughout the EU are engaging in self-immolation by embracing austerity, and then become wildly unpopular with the electorate 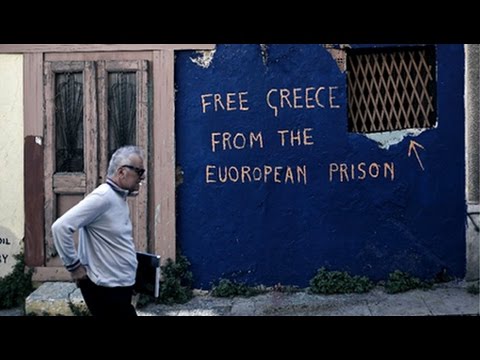 With the Brexit vote clinched by those who voted to leave the E.U., the possibility of a Grexit has reemerged in the minds of some. Greece has far more reason to leave the E.U. than the U.K. In a recent survey done by Pew Research, E.U.’s favorability has dropped by double digits in the continent. In Greece more than any other E.U. country, 71 percent of those who took part in the survey said that they had unfavorable views of the E.U.–far higher than the U.K. Further, more than 90 percent disapprove the way in which the E.U. has handled economic issues and the migrant crisis, where the Greeks bear the brunt of that burden.

Joining me now to discuss this is Dimitri Lascaris. Dimitri is a securities class action action lawyer. He has recently been appointed justice critic in the Green Party of Canada’s shadow cabinet.

Thanks for joining me, Dimitri.

PERIES: So, Dimitri, what are the implications of the Brexit on Greece?

LASCARIS: Well, I think to understand sort of how the Greek people are reacting and how this is likely to affect the way things unfold in the future, a little bit of economic context would be useful. And for that I think we can thank Matthew Klein of The Financial Times, who just authored an article in which he examines household consumption in Greece and the savings rate in Greece over the last ten years. And these are really quite startling figures. Klein cites statistics showing that in Greece real household consumption has dropped by an astonishing 27 percent–more than a quarter–since the peak, which occurred in around 2008, just before, a couple of years before the austerity program began in earnest.

A 27 percent drop is really–we’re talking about a radical alteration in living standards. And just to give you some perspective, in the Great Recession of 2008-2009, which is widely regarded as having been the worst recession since the Great Depression of the 1930s, real household consumption dropped “only” (with the only in quotation marks)–6 percent in Greece. So since then we’ve seen something that’s more than four times larger. It recovered back almost to its peak in 2009, household consumption, and then it just dropped like a rock.

So with so radical a reduction in household consumption, it must be the case that Greek households are spending far less than they were before the Greek economy was destroyed by austerity.

Now, Klein does something interesting after looking at the household consumption: he then looks at the savings rate in Greece. And he cites statistics showing that the savings rate Greece was an average of about 6 percent in the three years preceding the crisis, which started around 2010, but that it is now -6 percent.

So Greeks–what does this all mean? Greeks are eating into their savings at an alarming rate, and they’re doing so despite the fact that their household consumption has fallen to an extreme degree. So Greeks are watching their savings evaporate even as they are enduring a drastically reduced standard of living all at the same time.

And what happens, one must ask, when these savings run out? The question is all the more pressing, that question, because of course the social benefits upon which the poor and the hard-pressed depend in Greece are being eviscerated by the austerity program, and most particularly pensions, which are very important to sustaining poor Greeks.

PERIES: So what happens when the savings run out?

LASCARIS: What happens when the savings run out, especially when you have such weakened levels of social support, is an explosion or a collapse or both at the same time. That’s where we’re heading in Greece. And the Greek people understand this, I think, all too well. They’re living it on a day-to-day basis.

So it’s against this backdrop that the Greek people are sizing up what it means to be in the E.U. and what the implications of the Brexit vote are. And it’s not at all surprising. I don’t think anybody should be remotely surprised by the fact that there is such an extraordinarily high disapproval rating for the E.U., and in particular the manner in which it’s handling the economy in Greece.

So at the same time, fortunately for us, a poll came out which allows us some insight into how the Greek people are reacting to the Brexit vote. The poll found that–it came out in the last few days–the poll found that 45 percent of respondents believe that Brexit will have a negative impact on Europe. Twenty-seven percent, interestingly, view it as a positive development. And 16 percent appear to be neutral. So although those who view Brexit as a negative for the E.U.–not necessarily Greece, but for the E.U.–they outnumber those who view it as a positive, in fact, less than a majority of Greeks view the Brexit vote as being a negative.

This poll also looked at attitudes towards the political parties in Greece at the current time, [and this was] perhaps even more telling. And what it showed was that the New Democracy center-right party now enjoys a 6.5 point lead over the governing SYRIZA Party–or at least it’s the main partner in the coalition government. The New Democracy Party’s at 30 percent. SYRIZA is at 6.5 percent. Running a distant third is the neonazi Golden Dawn Party at 6.5 percent. Just behind them at 5.5 percent are the Communists. And then, neck and neck with each other at 2.5 percent are the coalition partner, the populist right-wing coalition partner of SYRIZA, ANEL, and the party that was cofounded by Costas Lapavitsas, Popular Unity, and other rebels from the SYRIZA Party last year after the referendum was disregarded by the government. They also were at 2.5 percent.

So what you’re watching, essentially, in Greece is a drama that’s played out throughout the E.U.: these leftist or so-called leftist or socialist governments engaging in a self-immolation by embracing austerity and then becoming wildly unpopular with the electorate. And SYRIZA, like PASOK, the purportedly social democratic party that preceded SYRIZA, appears to be going the way of the dodo bird. Now, it’s at 23.5 percent, so it still enjoys a significant degree of popular support, but that is eroding rapidly. And I think what we’re going to see in the near future if we continue down this path in Greece is increasing antipathy towards SYRIZA and even more antipathy towards the European Union, and in particular the eurozone.

PERIES: And, Dimitri, one thing that the Brexit vote has evoked is a discussion about reformulating, redesigning, rethinking the European Union. You think that’s something that’s going to be favored by the Greeks?

LASCARIS: Well, I think the Greeks would be wildly supportive of anything that results in a relaxation of the austerity policies. As we’ve seen, however, the electorate of the Greek will has virtually no impact on policymaking in the E.U. That was demonstrated in rather brutal fashion in July of last year after over 60 percent of Greeks rejected a less severe austerity program than was ultimately imposed on them.

So it’s interesting, it’s very instructive to look at how the E.U. elite has reacted to the Brexit vote, in particular in the context of Portugal, because Portugal late last year elected a government, a socialist minority government, that appears to have some level of support from leftist parties and the Greens, enough to maintain power for the time being. And initially that party said that they were going to roll back the severe austerity that had been imposed on Portugal. And Portugal is widely viewed as being the country that is most at risk after Greece in the eurozone because of the debt and austerity and the rest of it.

So what happened with the last 48 hours, well after the E.U. elite in the IMF had time to digest the results in Britain? The IMF issued a statement urging the Portuguese government to redouble its commitment to austerity. And Wolfgang SchÃ¤uble, the finance minister of Germany, caused quite an uproar when he told the press in the last couple of days that if Portugal didn’t stick by the austerity dictates of the current bailout, it would be forced to come hat-in-hand to the E.U. to beg for yet another bailout. And that caused quite a bit of outrage in Portugal.

So at this stage there’s absolutely no indication, as far as I can see, that the E.U. elite has learned any lessons from the Greek referendum in July of last year or the Brexit vote, both of which were certainly, at least to some degree–this isn’t the whole story, I think, but to some degree they were an expression of discontent with the economic policies of the E.U. and with the fundamentally antidemocratic character of the E.U. So at this stage there’s little reason to believe that the E.U. elite is going to draw the lessons that ought to be drawn from these two votes.

PERIES: Yeah. I think they’re more in the self-destruction mode.

We’ll be in Greece next week, both Dimitri and I, at Lesbos Island at the conference on refugees, which we will be livestreaming, and hope you join us both then.