Charlene Aleck, spokesperson for the Tsleil-Waututh First Nation, discusses the indigenous group's fight against the Trans Mountain pipeline and the struggle to protect its traditional way of life

Charlene Aleck, spokesperson for the Tsleil-Waututh First Nation, discusses the indigenous group's fight against the Trans Mountain pipeline and the struggle to protect its traditional way of life 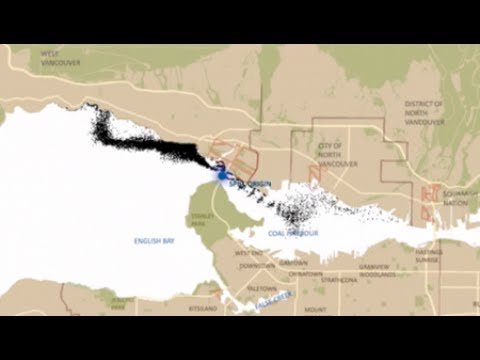 Dimitri : This is Dimitri Lascaris for the Real News in Vancouver, British Columbia. I’m joined today by Charlene Aleck an elected counselor of the Tsleil-Waututh First Nation and also a spokesperson for the Tsleil-Waututh Sacred Trust Initiative. Thanks very much for joining us today Charlene.

Charlene Aleck: Thank you for having me.

Dimitri : There’s been a lot of news about the relationship of Tsleil-Waututh to this new Trans Mountain pipeline expansion being proposed and pursued by Kinder Morgan. I’d like to start by talking to you about the sort of proximity of the traditional territory of the Tsleil-Waututh people to this project and particularly, the Westridge Marine Terminal where the Trans Mountain pipeline terminates.

Charlene Aleck: Yeah, there’s many aspects to the pipeline expansion proposal of it being expanded from the Alberta tar sands and ending right … It’s so close to our territory where our reserve is on the Inlet. Our reserve outline actually goes into the Inlet. As a young girl, my mother used to swim across the Inlet and back home, so I think it was under three kilometers.

Dimitri : And this is the very Inlet where the Westridge Marine Terminal is situated?

Charlene Aleck: Yes, and swimming across the Inlet that’s how close the Westridge Marine Terminal is.

Dimitri : Right. Historically and briefly what has the relationship of the Tsleil-Waututh First Nation been to the British Crown? And in particular, has any of the Territory been seated to the Crown?

Dimitri : This pipeline was originally constructed in 1953 I understand. At that time, prior to that time, did the Tsleil-Waututh people give their consent to the construction of that pipeline? Were they even consulted by the federal government of the corporation that built the pipeline?

Charlene Aleck: I just want to backtrack just a tiny little bit just to show that the government had given the church all rights and free open range to collect all the First Nations and put them in boarding schools, residential schools where we were stripped of our ancestral names. We were stripped of our language. We could not practice our culture. And, even to gather in a group of any more than a few of us, we would be punished and that was included off side of the residential schools.

Dimitri : This effectively prevented any collective decision by the Tsleil-Waututh First Nation.

Charlene Aleck: Absolutely and there was even a time where I remember stories being told to me where my grandmother and my great-grandmother needed written forms to go sell their clams downtown. If you didn’t have a written form, then you would be charged or sentenced or put in jail. Those types of restrictions, I just wanted to frame it that way … Those types of restrictions were so heavy handed, and then this industry pulls into town and wants to make good of our land and have a prosperous business for Vancouver. We were never allowed to even have legal representation to say anything about it, let alone oppose it.

Dimitri : Since the construction of the pipeline what have been some of the impacts environmentally, culturally, economically on the Tsleil-Waututh First Nation of the Kinder Morgan facilities and the other industrial developments in the Inlet where the reserve is situated?

Charlene Aleck: Tsleil-Waututh means “People of the Inlet.” We have stories of our first grandmother being born from the Inlet. That really ties us to the water. It really ties us to the land. Having that bond and that knowledge is hard wired with all Tsleil-Waututh people. We had a saying, “When the tide went out, the table is set.” Meaning, we got about over 90% of our diet from the Inlet. It was so bountiful, and it was so rich. We had a good way of life. It sustained us. We didn’t have to move around from camp to camp or place to place. We were fed, and we kept it like that. We kept a sustainable life.

I, personally, haven’t been able to harvest any of those things that my grandparents were able to-

Dimitri : What were some of the things they were able to harvest before the development?

Charlene Aleck: Oysters, mussels, clams and just all the vegetation that grew on the foreshores of the Inlet. It was so rich and bountiful that to this day we can’t … I know there is some shellfish that we can collect that doesn’t have high potent chemical pollutants in them.

But Tsleil-Waututh being a part of the Inlet and being caretakers of the land, we have been trying to rehabilitate and look after the land as best we could with the amount of industry that’s lining the Inlet. We’ve been able to fix creek beds that bear salmon, salmon bearing spawning. We’ve been able to fix clam beds where it has enabled us to harvest clams for the first time in 50 years since we’ve had the existing pipeline in our Inlet.

These are the types of things that we really focus our energy on. Yes, we are opposing this big industry pipeline expansion project, but we’re also at the same breath we’re working hard and diligently on the salmon spawning beds, the clam harvest that we’ve been finally able to do for the first time in 50 years.

Charlene Aleck: Back when the pipeline expansion proposal came in, we were told that the only process that we can take the steps forward is to go through the National Energy Board process and knowing that the process was so fundamentally flawed it was so heavy regulated by industry. We just said, “It’s not a fair process.” Knowing what was at stake, we knew in our hearts there were so many things that they weren’t going to look at, they weren’t going to ask those questions. So we took it upon ourselves to do our independent … We wanted to call it an environmental assessment, but after looking at the finished product, it’s an independent assessment because it looks at so much more than just what it does for the ecology around the Westridge Marine or the holding tanks or even the expansion. The effects that it has on an indigenous way of life that we’ve carried and sustained for years and years and years.

Dimitri : Do you think that your people’s stewardship of the land is going to be possible with this massive expansion in tanker traffic that would result from the expansion of the Trans Mountain pipeline?

Charlene Aleck: No. The delicate ecology of … I just want to go back to the clam harvest that we just had. The work that it takes to rehabilitate something like that with industry on top of that. If you want to put more industry on top of that, it’s just going to disseminate any other work that we had set forward. Same with the salmon spawning creek beds. All the work that we’ve put into rehabilitating that over the last 10-15 years, the salmon wouldn’t want to come spawn if they was more industry and tanker traffic and the noise, pollution and what that does for them. That’s all in our assessment as well. It looks at the irreparable damage it would be to the salmon, the ecology, the birds.

We recently re-harvested a whole bunch of elk and relocated them up into the Indian Arm, and that has brought back the ecology of vegetation, the singing birds, roots, and berries that we once harvested years ago. We’re starting to see signs of that and to have a gigantic industry project on top of that. It just does not mount.

Dimitri : The Tsleil-Waututh submitted an analysis, which I understand was 1400 pages meticulously documented the effects that this expansion would have. That went to the National Energy Board, is that correct? That evaluation.

Charlene Aleck: Yeah, it did, and we also sent copies wherever we saw fit because it does cover the economic value that it would hold for Canada’s economy. It has the ecology, the environment.

Dimitri : Despite this meticulous analysis, despite the First Nations opposition to the project. The Trudeau government has approved the expansion of Kinder Morgan. Do you think that can be reconciled that decision to go forward or approve this project over the objections of the First Nation supported by a professional independent analysis, is consistent with Prime Minister Trudeau’s electoral commitment to respect indigenous rights?

Charlene Aleck: You know we had hoped the assessment would help with the decision making that the Trudeau government had in the process of them making the decision. We had hoped that even the excess documents and other reports that we had compiled to help assist in that. To show this concern. To show the issues that we wanted to put on the table would be considered.

Dimitri : Given that there’s now been an approval of the project over the objections of the First Nation. I understand the litigation has a course of action that the Tsleil-Waututh First Nation has elected to pursue, is that correct?

Charlene Aleck: Yeah, since day one we had said that we would tackle this opposition in every legal means possible.

Dimitri : Where does that litigation currently stand?

Charlene Aleck: It’s still before the courts and yeah.

Dimitri : The government is continuing to insist that it’s fulfilled its obligation to the Tsleil-Waututh First Nation in that litigation?

Dimitri : Well, I hope we’ll be able to discuss with you the evolution of litigation down the road. Probably it’s going to be a long haul and one that many Canadians will be keen to observe.

Dimitri : Thanks very much for joining us.

Charlene Aleck: Thank you for having me.

Dimitri : This is Dimitri Lascaris with the Real News.