In Canada, Indigenous Groups are Litigating – And Winning 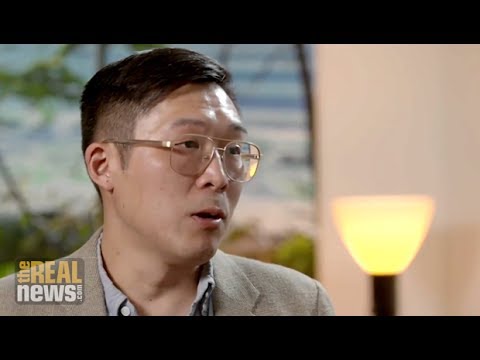 Dimitri L.: This is Dimitri Lascaris for The Real News in Vancouver, British Columbia. I’m here today with Eugene Kung, a staff lawyer with the West Coast Environmental Law Group. Eugene specializes in aboriginal and natural resources law. Thanks very much for joining us today.

Eugene Kung: Thank you for having me.

Dimitri L.: Eugene, why don’t you just start by telling us a little bit about West Coast Environmental Law. What does the organization do? What is the nature of the practice?

Dimitri L.: Let’s talk about the effect or the legal implications of a major resource project like the Kinder Morgan Trans Mountain Pipeline project which sits across from the traditional territory of the Tsleil-Waututh First Nation. Under Canadian law, let’s focus on Canadian law and not aboriginal law, what rights, if any, does the Tsleil-Waututh First Nation have in respect of that pipeline expansion?

Eugene Kung: The Canadian Constitution has guaranteed, recognized, and entrenched aboriginal rights, especially on decisions that affect their lands. Here in B.C. there have never been treaties signed. The land has never been ceded, nor have the decision-making authority, the laws, indigenous laws of the indigenous people from here. What that means in Canadian law is that any decision that affects those people, the indigenous people and their future rights and existing rights that are guaranteed in the constitution require consultation. Now over the course of the last 30 years or so, Canadian courts have slowly been developing that jurisprudence, defining what consultation means, what meaningful consultation means. What they’ve said is consultation without accommodation cannot be meaningful. They’ve also, in a recent case called Tsilhqot’in or Chilcotin, for the first time in Canadian history, recognized a large area of land that is considered aboriginal title land, in other words, in the control of the aboriginal people and not the Crown by default. That has huge implications across, especially in B.C. where there are no treaties, but across the country in terms of how projects like this move forward.

Another thing that happened in the Tsilhqot’in case was that the goal posts of the federal government were shifted from consultation towards consent. There is multiple mentions of the term consent, the goal of seeking consent as the purpose of consultation because what I think the courts were seeing over and over again, despite this clear establishment of a right to be consulted was more or less a check-box style consultation. So they would listen but not make any changes.

So, what we’re seeing is a slow progression towards this requirement of consent. This of course is consistent with the United Nations Declaration of the Rights of Indigenous People, which requires free, prior, and informed consent. Increasingly, First Nations are using the courts and using them successfully, some have estimated at a rate of about 90% success rate over the last number of years, to stop or change resource decisions.

Dimitri L.: You started by saying that consultation without accommodation is increasingly viewed by the Canadian courts as not being meaningful consultation at all?

Eugene Kung: I think it’s very clear that what the Canadian courts have said is that, when consultation is owed on a high level, so when a nation or a people has a strong connection to that piece of land and a project will significantly impact that interest, then that consultation must be very deep and that’s where the meaningful piece comes in. I think it’s pretty clear in the case of Trans Mountain that it will impact many of the local First Nations — Tsleil-Waututh, Musqueam, Squamish, and any number of them along the pipeline route.

Dimitri L.: Is it equally clear in that case that the Tsleil-Waututh have a strong connection to that land, the affected land?

Eugene Kung: I think it’s absolutely clear. We’ve seen a number of independent studies that show a longstanding connection to this part of the land. Tsleil-Waututh means people of the inlet. Even the federal government has recognized that their connection to Burrard Inlet in particular and many of the lands affected by Kinder Morgan is strong. It’s on the high end of what they call the Haida Scale after a case from the Haida Gwaii people that kind of set that precedent.

Dimitri L.: So in this evolving jurisprudential environment, the Tsleil-Waututh and other First Nations have commenced legal proceedings in order to block or seek modifications of plans to engage in major resource development. Can you tell us a little bit about the legal landscape, the types of litigation that are currently out there relating specifically to the Trans Mountain expansion?

Eugene Kung: Absolutely. So, by my count, there are currently 19 separate legal cases against the project. Those include a number against the National Energy Board’s recommendation, which was an incredibly controversial and flawed process.

Dimitri L.: Can I just pause there for a moment? Are those cases based upon claims that the National Energy Board did not comply with its own enabling legislation and processes or are those the cases in which the First Nations groups are actually invoking their right to be consulted?

Eugene Kung: You know, the National Energy Board, under sweeping changes made by the Harper government, became the sole federal regulator for the Kinder Morgan Project, which meant they were responsible for their own National Energy Board assessment but they were also responsible for the environmental assessment of the project? So they struggled under this expanded mandate. Add to that a huge amount of public interest and nominally they’re making a decision in the public interest but they weren’t particularly interested in hearing from the public. They shut out a lot of people, they limited the way that Kinder Morgan’s evidence was tested.

So there are a number of concerns about the National Energy Board, its process, and its conclusions. Some of those include its inability to discharge the duty to consult that is constitutionally owed to First Nations. There’s actually a separate case called Clyde River and Chippewa of the Thames before the Supreme Court of Canada right now where they’re exploring the very question of what role, if any, can the National Energy Board play as an adversarial system in discharging this duty to consult.

Dimitri L.: When new governments come into power, they have the authority obviously to adopt a different approach to the defense of litigation that’s been brought against them, for example, by First Nations. I think it’s widely believed and understood that under Stephen Harper the approach towards the defense of these claims was quite combative, non-cooperative, giving scant if any regard to the interests of First Nations. Have we seen a change in the way the government substantively, procedurally is litigating these claims since the Trudeau government came to power in a meaningful change? If so, what has it been?

Eugene Kung: Unfortunately, I haven’t seen any meaningful change in the way that these cases are being litigated by the Crown. They’re maintaining that their duty has been met. Certainly, the behavior of the federal government has a different tone than that of the Harper government. I think part of that is because, in the Enbridge Northern Gateway case, 16 or so First Nations took the federal government to town and the Federal Court of Appeals talked about how woefully inadequate the consultation of the Harper government was on that case. So they’ve already lost an important case based on inadequate consultation that had the effect of reversing the federal approvals for that project.

We’re facing that same thing again. You know, Justin Trudeau had promised to re-do the process. They didn’t. They continued forward with Stephen Harper’s flawed process. They added on a few things at the end to try and make it seem better. I think the question’s still very much in the air about whether that was adequate to discharge the duty to consult. The legal test is whether it upholds the honor of the Crown. That will be what will be argued over in the courts.

Dimitri L.: Where do these 19 cases currently stand? Are they relatively preliminary in their maturity or are they well advanced?

Eugene Kung: They’re relatively early in their process. In the 19 cases, a number of them are from the federal approvals and the NEB, National Energy Board, approvals. Those have all been amalgamated into one case under one file before the Federal Court of Appeal, similar to what they did with the Enbridge Northern Gateway litigation. There are three additional cases against the B.C. provincial government approval and then there’s a case in Washington State brought by Washington State tribes, Suquamish and Tulalip, against the US Coast Guard in particular focusing on their failure to uphold their obligations with respect to the Southern Resident Killer Whales that’s an endangered species that will be affected by this project.

Dimitri L.: I’ve heard it suggested that at the time that the Trudeau government announced it was going to approve this project it also announced its approval of another pipeline project, Line 3.

Dimitri L.: I’ve heard it suggested, maybe it’s a little bit in the vein of a conspiracy theory, that the Trudeau government really didn’t expect at the end of the day that the Trans Mountain Pipeline Expansion was going to succeed, whether as a result of litigation, as a result of the economics, as a result of mass resistance by the people of British Columbia and the First Nations, that it just wasn’t likely to go ahead. It was, in effect, a sleight of hand and by approving both it kind of gave the tar sands industry the Line 3 approval in the back door, which few people focused upon and, you know, focused everybody’s attention on this project which at the end of the day it doesn’t really expect to go forward at all. Do you think there’s any merit in that suggestion?

Eugene Kung: I mean, I wish I knew the answer to that question. I am not inside their heads. I would say that certainly I would expect that the government would have been very much aware of the level of opposition, both from First Nations and from local communities and municipal governments here in B.C. Whether they’ve done that as a sleight of hand I can’t say. I can just comment that that seems like pretty cynical politics to me.