Dennis Kucinich: Without real reform of the FED I won't vote for this bill

Dennis Kucinich: Without real reform of the FED I won't vote for this bill 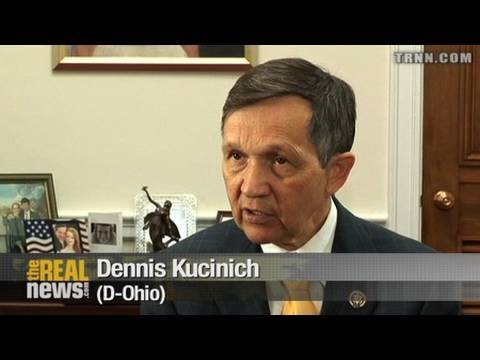 JAY: So what do you make of the Senate bill and the negotiations that are going on?

KUCINICH: Look, the Fed was a central player in the financial debacle that cost the American taxpayers hundreds of billions of dollars. And what does the Senate do? It gives the Fed more powers. We have to realize that as long as monetary policy and oversight of financial institutions is taken out of the hands of people who are directly responsible to the American public, as long as that happens, get ready: it’ll happen again.

JAY: So the issue here is the Fed is mostly privately controlled by banks.

KUCINICH: It is an issue. Our monetary policy is run for the benefit of a few at the expense of the many.

KUCINICH: I’ll tell you, well, what is going to happen at some point in the future, ’cause it’s inevitable, ’cause the Fed’s going to fall on its face again, this whole idea—this whole thing has been a CYA [cover your ass] exercise on behalf of the Fed. They were all over Capitol Hill lobbying to make sure they protect their turf and gain even more turf at a time when they had a major responsibility to oversee banks who pyramided subprime loans to the point of infinity, seemingly, that set the stage for the collapse of the housing market and that set the stage for America’s financial decline. The Federal Reserve was right at the apex of that process. And what happens in this financial reform? We’ve completely ignored the role that the Fed played. We’ve inevitably given them more power to essentially make sure that any future misdeeds can just be swept under a rug or shuttled off to some financial oversight board that has little impact at all. Banks too big to fail, we’re still going to see them.

KUCINICH: Too-big-to-fail should be too-big-to-exist, but not in this particular era. Too-big-to-fail translates into big enough to get a bailout from the taxpayers. We continue to assure institutions that if they lie, cheat, and steal to get ahead, at the end of the road there’s a pot of gold. And you know what? That’s wrong. So I’m not going to vote for this bill under any circumstances. The role of the Fed is a critical role, and it’s never been adequately described. They’ve been free from audit, and they were successful in beating back many attempts to be audited. They don’t want any accountability. You know, they like to print money through their quantitative easing and spend it into circulation. But for whom? They were giving it to banks. Banks were parking their money at the Fed, letting it gain interest, rather than give money to communities or businesses that needed to keep people on the payroll.

JAY: So you won’t support a bill that doesn’t reform the Fed.

KUCINICH: Number one. Number two, the idea of banks too big to fail. Nope.

JAY: How do you want to deal with that?

KUCINICH: Well, you know, we have to be about a deconstruction. You know, these banks have to be broken up. They have too much power in the economy. They have the power to, you know, redirect flows of capital and industry.

JAY: There’s a fight going on now. There’s the Lincoln proposal on the derivatives trading, to really separate derivatives trading from normal banking. Apparently the reports today are Barney Frank says that goes too far. They want to have a kind of compromise that will allow the banks to continue this derivatives trading. What do you make of that, the controversy?

KUCINICH: Well, I think, you know, based on our experience, there should be sharp limitations on derivatives trades. The whole problem is that they’re leveraging a relatively small amount of money 30, 40, 50 times, so that you create this incredible vacuum that all you need is things at the base of that pyramid starting to shift and the whole thing collapses. This is wrong. I mean, didn’t we learn anything? When you look at some of the central problems that caused this collapse—the role of the Fed in not monitoring banks, the role of black-box derivative trading—I mean, what’s changed here? How can we say that there won’t be another financial collapse if we don’t address some of the central reasons why this one occurred?

JAY: There’s an argument made by the Obama administration at one time, if people can remember, that the way to reform the health-care system was a public option. There’s been very little talk about a public option in the finance sector. Is there a real solution short of that?

Dennis Kucinich, elected mayor of Cleveland at the age of 31 in 1977, is the youngest person ever elected to head a major US city. Previously, Kucinich served on the Cleveland City Council. He won his Congress seat in 1996 and while there has authored or co-sponsored bills related to the health care system, Social…