The peace deal, which now heads to referendum, comes over more than a century of US intervention in the nation starting with breaking off Panama from Colombia, says labor and human rights lawyer Dan Kovalik

The peace deal, which now heads to referendum, comes over more than a century of US intervention in the nation starting with breaking off Panama from Colombia, says labor and human rights lawyer Dan Kovalik 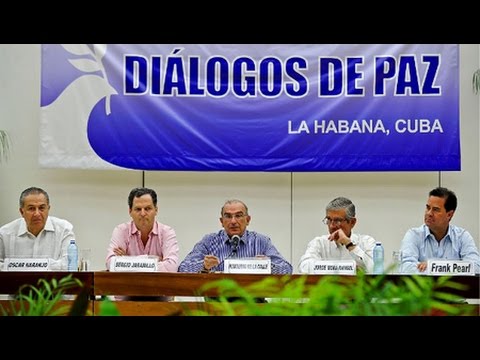 On Wednesday August 24, Colombia’s guerrilla group known as the FARC and the government of Colombia announced that they reached a final peace agreement between the two sides. They made the announcement in Havana, Cuba where the talks have been taking place for nearly four years. The announced agreement which still needs to be signed by Colombia’s President Juan Manuel Santos also needs to be approved in a national referendum which is currently scheduled to take place on October 2nd. This historic agreement would put an end to a 50-year conflict. The longest such in recent history. It’s one that has claimed the lives of over 260 thousand Colombians and displaced at least 6 million.

Joining us to discuss this historical announcement is Dan Kovalik. Dan has served as a labor and human rights lawyer and has also taught international human rights at the University of Pittsburg’s School of Law since the year 2012. Dan thank you so much for being on the Real News.

DAN KOVALIK: Thanks for having me.

BROWN: Dan to begin with, briefly give us your sense of what makes this agreement so historic and let’s take a closer look at some of the issues but give us your take on what you think about this.

KOVALIK: Well as you pointed out I mean I think the main thing that makes it historic is it would put an end to over 50 years of insurgency which I think is the longest insurgency maybe ever in human history. It’s been going on since 1964. And actually intermittently longer than that. So it’s obviously something that the Colombians are desperate to finally end. And if it were to succeed I think it would radically change not only Colombia but the rest of Latin America with it.

BROWN: So Dan, let’s take a closer look at some of the issues and concerns around this agreement. Now you are a human rights attorney and a colleague of yours in the field Jose Miguel Vivanco the America’s for the Human Rights Watch recently said “the agreement fails to fulfill the rights of those who suffered some of the worst atrocities during the Colombian armed conflict and opens the door to perpetuating the country’s cycles of impunity”. What do you make of this reaction and would you share his similar concerns?

KOVALIK: Well no and by the way I don’t really consider him a colleague but I’m not a fan of his by the way. But look I think it’s up to the Colombians to judge whether this agreement honors the victims or not. They’re going to have a chance to a national referendum as you mentioned on October 2nd to accept or reject this. It’s not really for human rights experts in the west to tell them how to make a peace accord.

There is going to be a truth and reconciliation commission that’s going to be set up. There is going to be as part of the process a return of land to those that have been displaced. So there will be a level of justice for people. Will there some immunity and some impunity yes. But I don’t think you can name a peace accord in the world that didn’t have an aspect of that. Neither party would’ve agreed to it if it didn’t have some aspect of that. So honestly I couldn’t disagree more with him.

The other thing I’ll say is this. Vivanco and others like him have never and would never even question whether there’s Americans who have fueled this conflict for decades. You know the United States created the paramilitaries before the war even started in 1962. So if we’re going to talk about impunity and respecting the victims, there’s plenty of people in the United States that I can think of who also could be brought to justice who never will be. And Vivanco doesn’t really care about that so there’s a lot of blame to go along. At this point the Colombians can decide if they want peace in return to give up. You know punishment for every single person who committed crimes.

BROWN: In an article that you recently published in TeleSUR English, you expressed concern about the ongoing presence of paramilitary forces in Colombia. Who could still derail the agreement. Once could perhaps add this concern or the concern that the former President Álvaro Uribe who was known to have ties to paramilitary forces and who was actively campaigning against the passage of this agreement is also working to derail it. How dangerous are these factors for the agreement’s success?

KOVALIK: Well they’re very very dangerous. There’s been 35 human rights defenders killed already in the first half of this year. As unionist continue to be killed there. People continue to be displaced. These crimes are mostly being carried out by those paramilitary forces who will try to derail this. In fact, according to Insight Crime, they cited Colombia’s electoral mission which predicts that out of approximately 1,100 municipalities in Colombia, there is a likelihood that there will be violence and or fraud in about 250 of those municipalities during the plebiscite. Again those acts of violence or fraud will largely be carried out by right wing forces. And in many chases right with paramilitary. So it is a very serious threat to the peace process and it needs to be dealt with.

BROWN: Dan as you mentioned earlier, another major player in all of this is the US government. And for decades as you said the US has supported the government of Colombia in this civil was against the FARC and in the process created one of the largest best armed and most repressive militaries in the hemisphere. Are there any indications that the US will actively support the agreement and what kind of policy change would be necessary for such support?

KOVALIK: Well at least John Kerry and Obama both have at least said they support the peace process. So that’s good. That’s a start. I think the change that has to happen is to stop funding the Colombian military and start spending the money we’ve been spending on the military which is about 10 billion dollars since the year 2000. Spend that on real development in that country. Spend it on helping them return land to people who’ve been displaced by the conflict. That’s what the United States can do.

BROWN: But Dan why is that? What are the US interests in Colombia? What has made Colombia obviously one of many countries that the US tends to put its fingers in these nations’ affairs. But what is it about Colombia that has caused us to fuel both sides of a civil war for the past 50 years and as you just said have a conflict there for the past 100 years?

KOVALIK: Well, Colombia specifically has an amazing amount of resources. They have oil. They have gold and there’s a gold rush going on because the price of gold. That has fueled the conflict quite a bit. They have coal. They have emeralds. They have fresh water. They have very fertile land in which bananas are raised.

[Chiquita] has been a terrible actor in that country for example. They plead guilty to funding paramilitary groups to the tune of 1.7 million dollars and running them 3,000 Kalashnikov rifles. 80% of our cut flowers come from Colombia. Colombia is the only country in South America that has both a Pacific and Atlantic coast. And again thus the canal that we stole from them. The possibility of that.

So in any case, Colombia has what is known as a resource curse. It’s very rich in resources and the US wants those and they want control over them and that has been a high motivating factor in us intervening in that country. And now in addition to that we have as you mentioned so beefed up their military that we consider Colombia really one of our last beach heads in a region which has largely rejected the United States after decades. And we don’t want to give that up. We want to be able–when I say we I mean the US government wants to project US power. Not only in Colombia but throughout the region through 7 military bases that the US is able to use there.

BROWN: And finally Dan, the agreement still needs to be passed in a national referendum and polls have been mixed as to whether or not the majority of Colombians will approve it. What is your sense of it being able to pass and what would a defeat in the referendum mean?

KOVALIK: I think if again there is at least some level of fairness in the election. If the violence that the paramilitaries threaten is kept to a minimum, then I think the referendum in favor of the peace cords will pass. I think if it were not to pass, I very much fear for that country. I don’t see another alternative for that country. I fear that it will sink into even great bloodshed than it’s been suffering in recent years.

So I think all of us should hope and pray that that peace accord will pass and I think as Americans we should do everything that we can to support the peace. To travel to Colombia to be election observers during the plebiscite. And to help cultivate peace in a country where our government has played such a role in creating war.

BROWN: We’ve been speaking with Dan Kovalik. Dan graduated from Columbia University School of Law in 1993. He has served as a labor and human rights lawyer ever since and he’s also taught international human rights at the University of Pittsburgh’s School of Law since 2012. Dan we certainly appreciate your time and your expertise today. Thank you.

KOVALIK: Thank you. Thanks for having me on the show.

BROWN: Thank you and thank you for watching the Real News.

Dan Kovalik graduated from Columbia University School of Law in 1993, and has served as a labor and human rights lawyer ever since. He has taught International Human Rights at the University of Pittsburgh School of Law since 2012.