The Obama administration's intervention has not halted the construction of the Dakota Access Pipeline, says Desiree Kane

The Obama administration's intervention has not halted the construction of the Dakota Access Pipeline, says Desiree Kane 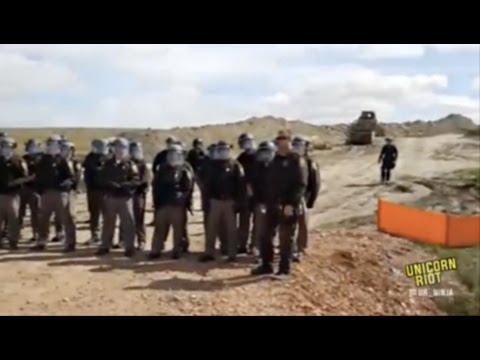 JAISAL NOOR, TRNN: It’s starting to appear the Obama administration’s much hailed and surprising intervention last Friday to halt construction on a portion on the 3.4 billion dollar Dakota Access Pipeline has actually changed very little on the ground. Energy Transfer Partners, the company behind the pipeline has declined a request to halt construction of the 1,400-mile pipeline. Meanwhile on Wednesday, water defenders continued to disrupt construction in North Dakota while also getting international solidarity from thousands of activists across the world.

Well now joining us to discuss this from North Dakota is Desire Kane. She’s a Miwok woman, multimedia journalist, live media event producer, currently working on a fully funded pilot leadership development program that aims to train young activists and organizers on digital organizing techniques. And she also was the national engagement director for the People for Bernie Sanders. Thanks so much for joining us.

DESIRE KANE: Thank you for having me.

NOOR: Let’s start off by getting your thoughts on what Bernie Sanders said to the thousands of people that gathered in Washington, DC on Tuesday. He came out and said we need to stop the pipeline. What was the feeling in North Dakota to Sanders’s response? He’s the former democratic presidential candidate.

KANE: Everyone here obviously agrees with Bernie Sanders. We do have to find stop this pipeline and so if he has taken a stand, which he has, in saying we have to stop it, we are in complete alignment.

NOOR: And so talk about what’s been actually happening in North Dakota. Our viewers know that the Obama administration halted construction but how much construction has actually been halted and how much is ongoing right now?

KANE: Well the Obama administration did not actually halt anything. What they did was request that DAPL, Dakota Access Pipeline, Dakota Access LLC halt construction. And that was taken as a suggestion, not as an order because it was a voluntary ask and they did not take that ask. So they have continued construction.

NOOR: And so talk about what the mood is because we understand that there was at least some celebrations when that ruling came down. What’s the mood right now? Are the encampments still getting support from around the country and internationally? Both in supplies and solidarity from people?

KANE: Yea. The support keeps coming in. Today we had members from the Ecuadorian Amazon from the Sarayaku members from the [inaud.] community who have successfully fought oil companies as they fought for their ancestral land. So we’ve had 250 plus nations who have passed tribal resolutions to stand with Standing Rock and it just–the support continues to pour in. Now when the administration put in the ask for voluntary ceasing of construction it was taken as a small victory. Now no one here is disillusioned at all but we are a little bit skeptical because it’s viewed as oh the system’s working. Someone’s doing something. The Department of Justice, they’re stepping in. But for a number of us that view it as well okay so the Department of Justice is going to do this investigation, it’s going to take them months. By that time, it feels like and seems to be a tactic to take the wind out of the wings of social movements and we’ve seen this time and time again. This as a political theater style tactic to squelch popular movements.

NOOR: So clearly the protests and the disruptions of the construction are still ongoing. Can you give us an update on what’s been happening today? We understand there were several actions throughout the day where people stopped bulldozers and stopped the pipeline.

KANE: Over the last few days we have had direct action. Nonviolent direction actions aimed at ceasing construction. Today alone we had 8 arrested who were willing to put their bodies in the way to protect ancestral homelands, sacred sites. There were 27 graves that were dug up and desecrated. Dakota Access, they knew that with the GPS coordinates, what lie in their path. Now some of that construction has been halted through an injunction. However, that’s expected to be appealed. Now the company does not seem to care about burial sites, sacred sites, water. And people here repeatedly take nonviolent direct action. They’re participating in nonviolent civil disobedience day over day over day and that’s expected to continue.

NOOR: So can you give us a little historical context because obviously from the Native perspective this is just the latest chapter in a process of genocide for 500 years in this country. And it seems like again from the Native perspective, it seems like that aspect of it, the seizing of land, the seizing of resources, that actually has not changed at all. This whole, for the entire existence since the colonies to the United States. Can you talk about that a little bit?

KANE: Yes I think your statements are accurate. We’re seeing history play out over and over and over again. But what’s different this time is that we’re armed with cameras. We are livestreaming when things happen when there are interactions with police. So for the first time in history, we are writing our own story whereas previously the people who right the books write the history books in their favor. And it’s a lot different now that we’re armed with technology. We’re armed with cameras while we are unarmed with weapons of any sort. We are definitely taking a narrative and our story into our own hands and making sure that these interactions with the US government are recorded, they’re well documented and it really facilitates the thing that we hear in social movements when we say the whole world is watching. And we’re seeing millions and millions and millions of people every day on our Facebook page and watching the videos and watching this whole thing unfold. So while this feels to be a replaying of history we have a chance to change history because we are now equipped with different tools in our toolbox.

NOOR: Well we really appreciate you coming on and joining us. Desire Kane joining us from North Dakota. From the actual site of these events that the whole world has been watching for much time now. Thank you so much for joining us.

NOOR: And go to the RealNews.com for all of our coverage over the fight over the Dakota Access Pipeline, including a story produced today about the Global Day of Action that happened on Tuesday. Thank you so much for joining us.

Desiree Kane is a Miwok woman, multi-media journalist, and a live-media event producer. She’s currently working on a fully-funded pilot leadership development program that aims to train young activists and organizers digital organizing techniques with an emphasis on social media engagement and skills applicable to campaign and advocacy efforts and is the National Engagement Director…