Standing Rock and the Struggle Against Corporate Power

Even if oil ultimately begins to flow through the pipeline, the movement has learned how to resist in spite of corporations' endless money and political influence, says journalist Desiree Kane

Even if oil ultimately begins to flow through the pipeline, the movement has learned how to resist in spite of corporations' endless money and political influence, says journalist Desiree Kane 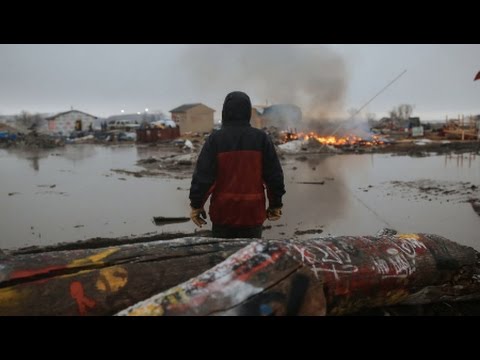 Tents set ablaze Wednesday, at the campsite where 100’s of Native Americans, and environmental activists have staked out their base for months, protesting the construction of the Dakota Access Pipeline. The eviction notice deadline was issued for Wednesday at 2:00 p.m., set by North Dakota Governor, Doug Burgum, and the U.S. Army Corps of Engineers. The standoff intensified as fears of more violent clashes, and arrests. And some protestors have vowed to defy the order to evacuate.

It should be noted that President Donald Trump, who signed an Executive Order, clearing the way for construction to move ahead, has been shown to have financial ties to Energy Transfer Partners, operators of the Dakota Access oil pipeline. With between half a million and $1 million invested in the company, as well as, half a million to $1 million-worth of holdings in Phillips 66, which has a 25% stake in the project, once completed. Trump also received more than $100,000 in campaign contributions from its chief executive, according to The Guardian newspaper.

And right now, we’re joined with Desiree Kane. She’s a journalist and activist, who lived at the Standing Rock encampment for several months. She’s coming to us tonight from Colorado. Desiree, we appreciate you joining us, thank you.

DESIREE KANE: Thank you for having me.

KIM BROWN: So, Desiree, we understand that you are in touch with those who are actually on the ground right now, as the encampment is facing eviction from local law enforcement, as well as, federal agents. So, what are you hearing? What are the conditions on the ground, as recently as you’ve been told?

DESIREE KANE: So, most of the people that I have been in touch with, I built relationships with after living at Oceti Sakowin camp, for seven months. And most of those people I still talk to on a day-to-day basis. We’ve been in very close touch today, because there is a breakdown in communication. So, I am just merely going to tell you what I’ve been hearing. I can’t give anything beyond that.

But what I have been hearing, is that one, spirits are high. But two, it’s important to remember when people are seeing structures that are on fire, to understand that there is a cultural aspect that needs to be considered of leaving encampments from certain traditional indigenous groups, and tribes.

So, people’s spirits are high. There’s an incredible amount of fortitude, which is something that people have been seeing for months and months, since this fight began. And they… the last thing I heard was that police were starting to make arrests, and that was about an hour ago. Right now it is 4:49 pm central. So, it would have been about 4:45 when I first heard the reports that police were arresting journalists, and that there is a journalist’s hip that was broken, in the kettling of these journalists, that were then arrested. And there have been some arrests already made at camp.

KIM BROWN: Okay, we’re going to await confirmation about the reports of journalists being arrested, and people being injured. But I’m curious as to the types of tactics that you’re hearing that police are using, because we have been told that police have had live ammunition.

KIM BROWN: And we’ve seen obviously the deployment of tanks and military vehicles, and tear gas in the past. So, are these same types of tactics being employed today for the camp evacuation?

DESIREE KANE: There was a whole bunch of stuff that was loaded from a vehicle into the Prairie Nights Casino, by the, I believe it was, National Guard — that looked like it was a bunch of gun cases, and things like that. Now, it was never discovered what they were loading in, two days ago, in the middle of the night. But so, there is a lot of concern that there is live ammunition in those guns. And what we’re seeing is again, native people advancing this resistance, that has been in place since we were named “the Indian problem” by, you know, 4-500 years ago.

And so, when you’re seeing this gross militarization, there really isn’t much difference. I mean, we… when I was in camp, and I only left about a month ago, there were concerns that they were already using live ammo, because people were getting clipped. You know, like a bullet, or whatever, would go by and clip somebody on their arm, and it was really small, and so it looked like it was maybe the shape of a bullet.

Now, I don’t know that, I can’t say with absolute certainty that they are using live… or that they have live ammunition on them. But it is believed, that because today was the day that was given as the eviction day, and anybody who was going to be there was going to be arrested. This is kind of a final straw approach, where it’s like, there’s not going to be any movement. I do believe that they are using some really intense tactics today that we haven’t seen, really out in the public before, because of this deadline.

So, I have heard of people saying, they’ve got real guns. They’ve got snipers on us. We’re surrounded in 360 degrees. The police have blocked off all the entrances to the Oceti Sakowin encampment.

KIM BROWN: About how many people are still remaining at the encampment, to your knowledge, Desiree?

KIM BROWN: And this is down from, I believe, a large group of, at one point, about 10,000. Is that close to accurate? How many people were at the encampment when you were there?

DESIREE KANE: Well, I mean, over the course of seven months, I was one of the first non-Lakota there, so there were 15 people when I was first there. And then over Labor Day it was around 8,000, and then so the first week of December when the veterans… the non-native veterans that hadn’t been there, did come, that was probably closer to 11,000, between 10 and 11,000.

KIM BROWN: Incredible. And have you heard anything about whether or not the veterans have returned to Standing Rock? There’s an activist who used to be based in Baltimore, Michael Wood, who has been tweeting significantly about this. And I believe that the veterans have been redeployed, as it were, or redeployed themselves, to the Standing Rock encampment. Is that accurate as far as you know?

DESIREE KANE: Yes, absolutely. There are a number of veterans groups that are out there, predominantly one that formed out of the veterans’ initiative, that was in early December. They’re going under the banner, “Veterans Respond”, and they have been there a little over a week, on the second deployment. But this is a clean-up deployment, as well as a defense deployment. So, they’ve been out cleaning.

KIM BROWN: Indeed. And also, I wanted to ask about the response from the tribe, and everyone there, the environmental activists, non-native and native alike. I mean this has been an excruciating battle. People have literally put their lives on hold, and lived outside to express their frustration with this process on behalf of the Army Corps of Engineers, the Dakota Access, the Dakota Transfer Partners, and as well as the White House — both White Houses, with President Obama and now, Donald Trump being in the White House.

So, what is the feeling on the ground? You mentioned earlier that people are heartened, that they still feel very engaged, and optimistic. But this has to feel somewhat as a defeat, as the Dakota Access Pipeline is ready to start moving crude oil through that area.

DESIREE KANE: I’m not sure if it feels like a defeat, because what we did at Standing Rock over all these months was we taught the nation how to fight. And that pipeline is not pumping oil yet. And I feel like I personally, once oil starts going through the pipe, that’s more like, okay, it’s happening. But we’ve got a long legal battle ahead. Like, the general “we”, you know, as a movement. And so, a lot of those battles are still taking place.

It’s hard not to feel defeated, but oil isn’t running through that pipeline yet, you know? It can still be stopped. And I think that that is what the sense is with a lot of people that are at camp as well, is like, there’s no oil running through it yet. And we learned so many things about how to fight such a massive corporate entity with endless money, and endless influence. I mean, we really have given Energy Transfer Partners a run for their money.

I mean, with no money and popular sentiment supporting us, we really, really, really have given Energy Transfer Partners, like, a pain in their rear, you know. And so, what I… I don’t view this as a defeat, because I’ve been getting phone calls from all these different pipeline fights. I was down at the Trans-Pecos Pipeline fight personally, to like, go advise some things down there, and there’s this Sabal Trail in Florida.

So, we started with nothing in Standing Rock. And it was actually Lakota people, they started… they started this camp, just on the banks of a river. And then this whole movement just came about. Now, that is not considered to be a defeat at all. That we turned out multiple times 10,000 plus people, you know. And like, never in history have we seen, for a native spiritual movement that has environmental ties, treaties ties, all these things, I mean, thousands and thousands, and thousands of people tuning in. And so, what we’ve learned from that, like, we’ve been sharpening our nails on those frontlines, to like, fight back now in a lot of different places.

So, what America will probably see, the United States will probably see, as well as in Canada, is this now decentralized approach to pipeline fights. Where there are going to be a whole bunch of spirit camps, and frontline camps, direct action camps, all these different camps. So, we’re going to still continue to be a big problem. And that’s not defeat at all.

We’ve been joined by Desiree Kane. She is a journalist and an activist. She spent several months on the ground in the encampment site where the native people in North Dakota have been fighting against the construction of the Dakota Access Pipeline. On Wednesday afternoon, they were given a deadline to evacuate, and local law enforcement, as well as federal authorities have surrounded the people at the encampment site, and it is in the process of being cleared. But it is still an ongoing event.

So, we will keep everybody up to date, as things transpire there. Desiree, we appreciate you joining us, thank you.

Desiree Kane is a Miwok woman, multi-media journalist, and a live-media event producer. She’s currently working on a fully-funded pilot leadership development program that aims to train young activists and organizers digital organizing techniques with an emphasis on social media engagement and skills applicable to campaign and advocacy efforts and is the National Engagement Director…