The investigative and Pulitzer prize-winning journalist takes a deeper look into the activities of the Donald J. Trump Foundation and the Clinton Foundation

The investigative and Pulitzer prize-winning journalist takes a deeper look into the activities of the Donald J. Trump Foundation and the Clinton Foundation 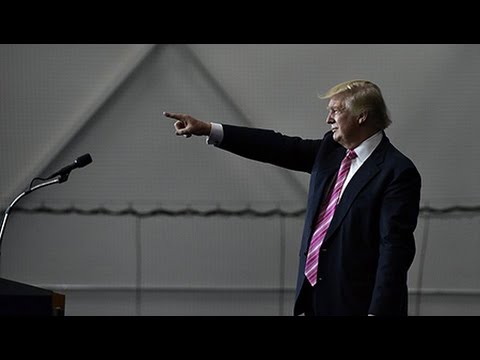 As the presidential race intensifies, more and more attention is being focused on each of the major party candidates’ family foundations. Various conservative publications and Donald Trump himself has called attention to supposed conflict of interests in the donations that the Clinton Foundation has received. Meanwhile on Thursday, New York Attorney General Eric Schneiderman announced that his office will be investigating the Trump foundation for having solicited donations even though it doesn’t have a permit to do so, as required by New York State law.

Joining us from Rochester, NY to discuss these two foundations is David K. Johnston. David is a Pulitzer Prize winning investigative reporter and bestselling author and columnist. He’s also the author of the just released book, The Making of Donald Trump. Thanks for being on the Real News David.

DAVID K. JOHNSTON: Dharna, thanks you for inviting me.

NOOR: So you recently penned an article for the Daily Beast in which you compare Trump and Clinton foundations. So let’s begin with the Trump Foundation. Your article highlights that its relatively difficult to know what the foundation has done since very few of its records are actually public. But what have you found? What does the foundation do and where do its funds actually come from?

JOHNSTON: Well the Donald J. Trump foundation only has about 1.3 million dollars as of its last tax filing which is for the year 2014. All of the money that remains in the foundation was provided by others. Trump has made only 1 minor gift in recent years. He gave 30 thousand dollars to it in 2008, which to someone worth 10 billion dollars if he’s worth that much is insignificant. The foundation has been financed primarily by vendors who work with Donald Trump like the fellow who makes his neckties in China NC which had an association with him through his now cancelled TV show Celebrity Apprentice and the people who do the World Wrestling Federation. Its gifts, mostly by numbers, are small and insignificant. A thousand dollars here 5 thousand dollars there.

However, in the most recent year when it gave away about a half a million dollars, 40% of the gifts were clearly self-interested gifts. 50 thousand dollars to the prep school where Donald Trump’s youngest son Baron attends. Another gift was made to the Citizens United Foundation. That’s the group that allows all the dark money to go into politics that we don’t have to trace.

In addition, in the past there appear to be, by my count, at least 9 illegal acts by the Donald J. Trump Charitable Foundation. Those include buying two paintings of himself for 30 thousand dollars. One of which hangs in a Trump resort. You’re not allowed to do that. That’s called self-dealing. He caught a Tim Tebow football helmet likewise for himself.

He’s used the foundation to pay, according to the Washington Post, more than 250 thousand dollars of legal obligations that he had and he made a 25-thousand-dollar campaign contribution to Pam Bondi, the Attorney General of Florida at a time when her office was considering whether to investigate and eventually sue Donald Trump for fraud through the Trump University. Her office decided not to pursue the case. It lied about the matter by saying it had 1 complaint when in fact there were numerous complaints and more than 8 thousand pages of state Attorney General records about the fraud that is Trump University. All of these are illegal acts that bring into question whether the foundation should be forced to shut down.

NOOR: Right. Since many of these Trump Foundation donations have been found to be illegal and self-dealing, what should the penalty be for this? Does that constitute a crime?

JOHNSTON: Well, congress is actually very lenient about these things. Trump says that he paid a 25-hundred-dollar fine which is what the law prescribes for making a campaign contribution with charitable funds. He also says that he’s replaced the 25 thousand dollars that he gave to Pam Bondi. It’s important to understand that the Trump organization misreported this to the federal government on its tax return and came up with 2 cockamamie stories to try and explain this all away before it owned up to what had happened. On the tax side, it is not a crime. The principle penalty would be to revoke its charitable status. Since Trump is not a donor, he would not suffer any penalty from doing so and I would be very surprised if any court anywhere would take any action prior to the election.

Generally, courts won’t act on matters like this when you’ve got an election pending because they don’t want to be seen as interfering in the political process.

NOOR: Now what about the New York requirement to register as a donations soliciting foundation which the Trump Foundation actually never applied for. Just how illegal is such a violation?

JOHNSTON: Oh this is a serious matter. The New York State Attorney General as the guardian of charitable assets, has some significant authority here. He can shut down the foundation effectively. He can require the return of money and of course Donald Trump’s argument is well, the Attorney General’s a democrat who’s already suing me over Trump University, clearly this is politically motivated rather than the Attorney General is simply doing his job of enforcing the law and people should know that his is in a broad context of things that I describe in my book, The Making of Donald Trump, that my peers in news media are not going in to. A lifelong illegal conduct by Trump where he thumbs his nose at the law, he cheats people, out of money, illegal immigrants that work for him, employees, vendors who supply goods to him, and does business with American mobsters, Russian mobsters, conartists, major cocaine trafficker who he sought big favors for and did business with for years.

Of course the Clintons are not nearly as wealthy. They’re worth about no more than 62 million dollars whereas Trump claims 10 billion. The Clinton Foundation publishes its audited financial statement. The Trump Foundation does not even know as a soliciting organization by law what’s required to. The Clinton Foundation underwent, because questions were raised about the gifts received from foreign governments and wealthy foreign people, all of whom have lots of business before the government in the State Department, a forensic audit. A forensic audit means that, in a normal audit you sample. Auditors will go through and pull every 13th file or every 33rd file just to see if things are as they should be. In a forensics audit you look at every single transaction.

The audits are on the websites of the Clinton Foundation and they found nothing of consequence that was amiss. The few things that were wrong were corrected and unlike the scattershot and self-interested giving of the Donald J. Trump Charitable Foundation, the Clintons don’t get any money from the foundation and there are at this very moment while people are watching, at least 11 million people on this planet who are alive and breathing and therefore not a lot of orphans because the Clinton Foundation increased the number of people who are getting HIV medications in poor countries from about a quarter of a million to close to 12 million people.

NOOR: But in the case of the Clinton Foundation, most of the accusations leveled were the questions brought up have to do with the conflict of interests or quid pro quo. So what does that say about this?

JOHNSTON: Well when you look at not only the news reports on it but the emails and things, I don’t see anything of great consequence there. The Washington Post recently did a piece about the effort to get a job for someone who had been an intern. Well what is surprising about somebody sending an email saying hey we have this intern who’s doing a good job. You should look at him to hire him. By the way there’s no evidence the person got hired. Anybody who’s going to do things on a global scale with very wealthy people and large governments is going to be able to say well wait a minute, this outfit also had dealings with the State Department.

NOOR: But one of the major issues that’s been raised in terms of the amount of money it’s raised is that the Clinton Foundation has received 10 to 25 million dollars from Saudi Arabia at a time when relations between the US and Saudi Arabia have been very close. The Obama administration for instance has agreed to over 100 billion dollars in arms sales to Saudi Arabia and essentially supporting its actions in Yemen amongst other things. So is that not a conflict of interest given that Hillary Clinton was Secretary of State for half of Obama’s term in office?

JOHNSTON: Well the question I have to ask is what happened? What was the damage that was done here? We have been trying for years to make sure that the Saudis operate with the American sphere. They have a terrible government that beheads people for adultery and fosters a lot of awful behavior including people who blow themselves up and kill innocent people but this has been going on for years. There’s no indication of anything that was done that was unusual or out of what has been routine business even if you and I don’t like the business as a result of this.

I mean nobody has pointed to something that was changed and [inaud.] that grew out of this. That’s the point that I’m trying to get across. You know we don’t live in a sanitized world where people are saints. We live in a real world and there’s no indication that the Clintons in anyway have benefited from this foundation other than prominence and there is evidence that they’ve done very substantial good work here.

JOHNSTON: That I wouldn’t dispute at all. I mean I think that the Clintons have used their foundation to promote the things that they think are important in the world and that inherently promotes them. Right now Bill Clinton is the biggest rock star in the world. When Barack Obama leads, he’s going to way surpass Bill Clinton. And the Clintons by the way have made it clear, they are closing down the foundation if she wins the election. But soliciting money for which you do actual good works and save 11 million lives, let’s compare that now to Donald Trump’s self-interested giving and buying paintings of himself and making illegal campaign contributions. These are not equivalences. There is no moral equivalency

NOOR: Thank you so much. David K. Johnston joins us today from Rochester, New York. Thanks for joining us and we hope to talk to you again about this soon.

NOOR: And thank you for joining us on the Real News Network.

David Cay Johnston was called by The Washington Monthly, “one of this country’s most important journalists” and the Oregonian newspaper compared his work to the great muckrakers Lincoln Steffens, Ida Tarbell and Upton Sinclair. Johnston won a Pulitzer Prize in 2001 for his exposes of tax loopholes and inequities.