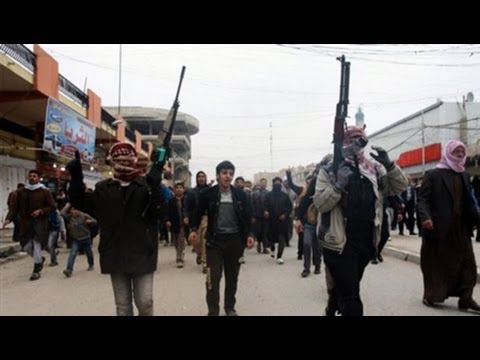 It’s been almost three years since the United States completed its withdrawal of American troops from Iraq. But what did they leave behind? The United States has continued to support Iraqi Prime Minister al-Maliki, and now Maliki’s regime is tangled in a brutal battle for the city of Fallujah. The U.S. says that they are supporting the fight against Sunni Islamist militants by backing Maliki. But the Iraqi government’s ongoing attacks on Fallujah are resulting in more and more claims of war crimes.

Now joining us to update us on the situation in Fallujah is our guest, Dahr Jamail. Dahr Jamail is a staff reporter with Truthout. He’s also the author of two books, one of which is Beyond the Green Zone: Dispatches from an Unembedded Journalist in Occupied Iraq. And, Dahr, just–well, he returned from Iraq about a year ago, and he wrote a piece about his time there as well as interviews that he conducted recently, titled “Iraqi Government Killing Civilians in Fallujah”.

Thank you for joining us, Dahr.

DAHR JAMAIL, INVESTIGATIVE JOURNALIST AND AUTHOR: Thanks. Good to be with you.

DESVARIEUX: First, Dahr, can you just paint a picture for us as to what’s actually happening in Fallujah from the sources that you interviewed? Who is fighting the Iraqi forces?

JAMAIL: Fallujah is currently and has been for a couple of months now encircled by the Iraqi army, who has been shelling different parts of the city, as well as conducting periodic air strikes within the city, trying to soften it up in order to carry out possibly a full-scale siege of the city.

What happened was there’s been ongoing protests now for over a year from across Al Anbar Province, the focal point of those being in and around Fallujah of people in the province accusing al-Maliki’s government of not respecting their human rights, of carrying out illegal home raids and detentions and torturing and other horrible things that I’ve also written about in the past. And the Maliki government has been accusing any kind of resistance that’s happened in Anbar Province, and Fallujah specifically, as terrorism, so any–just like what the U.S. did when the U.S. occupied Iraq, any time there was a city like Fallujah where the majority of the people stood up because they didn’t want to be occupied and started fighting back against what they saw as an illegal occupation, just as the people in Fallujah now are fighting in large part for their human rights.

But the problem is they have been infiltrated by a group that was affiliated with al-Qaeda, ISIS, the Islamic State of Iraq and Syria. There have been a small number of those radical jihadists in the city. So that’s what Maliki’s using to paint the entire situation as the government against terrorism, when in reality it’s a minute portion of the fighters in Fallujah are with that group, and the vast majority of them are affiliated with regional tribes in the area, and they’re fighting against the Maliki government because they feel like their human rights are not being respected.

DESVARIEUX: Dahr, break this down for us. How much does the U.S. government actually send to Iraq to fight these Sunni Islamic militants?

JAMAIL: So far the U.S. has sold over $20 billion in arms and training and other support to the Baghdad government of Nouri al-Maliki, and they actually, when the situation in Fallujah broke out the level that it is now, in January the Obama administration was very quick to rush a special order of munitions, missiles, and bombs, etc., to the Maliki government in order to be used in Fallujah, and then just recently forced through–sped up another order to get over to them to use. So it’s really a very disconcerting instance of history repeating itself, where we have Fallujah, where, once again, most of the people there are not affiliated with terrorism in any way. They’re simply trying to safeguard themselves, their city, and their families. But they’re being brutally attacked and oppressed by a government that they’re accusing of war crimes.

DESVARIEUX: In your piece, you mention that when the United States invaded Iraq in 2003, there was no fighting in Fallujah, and tribal leaders actually in the city allowed the U.S. military to enter the city in peace. But what’s basically changed from that time to today?

JAMAIL: Well, what’s happened, again, in another parallel with what’s happening in the present tense to what happened during the U.S. occupation, is there wasn’t any resistance initially in the city, but when external forces–then U.S. forces; today, present tense, Maliki’s army–came into the city and started conducting home raids and then torturing people and insulting people’s dignity, then violent resistance started within the city. So a direct parallel, what’s happening now, with exactly what happened when the U.S. was occupying Iraq and the city.

And so people are standing up for themselves and fighting back, ’cause what’s happening now comes on the heels of over a year of nonviolent protest across Al Anbar province, and in Fallujah specifically, weekly protest against the Maliki government, appeals to the UN to step in and try to help rectify the situation, always falling on deaf ears in Baghdad. And then that’s what led to this situation where they kept coming in, they started–the Maliki army started killing unarmed demonstrators. And so that’s what torched things off in Fallujah to cause the situation that we’re looking at right now.

DESVARIEUX: Dahr, moving forward, what do you see as a viable solution to restore some semblance of peace and order to Fallujah?

JAMAIL: I don’t have a broad answer to that question, but I think for starters the Obama administration needs to stop funding and arming the Maliki administration, because they are [incompr.] in war crimes that are happening on the ground with that funding. And the weaponry that’s being rushed into Iraq.

Also I think one thing the U.S. government could do is pressure the UN to step in and take, play a bigger role and start holding the Maliki government to account for things that are happening on the ground in Iraq, for the ongoing torture, and for, certainly, the killing and wounding of civilians that’s happening in Fallujah and across the rest of Al Anbar right now. Those are two things that could be done immediately.

DESVARIEUX: Alright. Dahr Jamail, investigative reporter and author, thank you so much for joining us.

JAMAIL: My pleasure. Thank you.