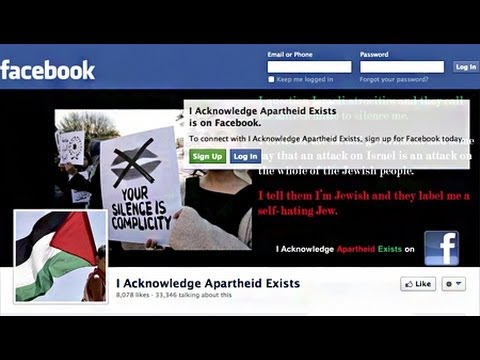 As we all know, Facebook is a tool for people to organize and connect. But what you might not know is that Facebook has a feature that allows people to flag whatever images or pages they deem to be inappropriate.

But what happens when your page is about human rights, specifically Palestine, and Facebook decides to take it down? That happened, actually, to our guest Derek Hummel.

Derek Hummel has been involved in 15 campaigns in eight states, including official capacities in state legislatures. His expertise lies in political communication and oppositional research. He is currently the communications director for I Acknowledge Apartheid Exists.

Thank you for joining us, Derek.

DEREK HUMMEL, POLITICAL CONSULTANT: Thanks for having me.

DESVARIEUX: So, Derek, what happened to your Facebook page, exactly?

HUMMEL: On April 3, prior to that we’d actually been flooded with a lot of [incompr.] from oppositional groups on the other side of the Palestine-Israel conflict, the debate regarding it. And Facebook actually has a policy that very rationally and logically bans a page or unpublishes it after it meets a certain quota of reports. And the reason for this is to make sure that if nudity or pornography or some explicit violence is put out on Facebook, they don’t have to wait until their staff gets around to being able to review it before they shut the page down.

Well, individuals have learned how to abuse this policy, as they did with us. So once it hits a certain quota, Facebook shuts it down. That’s what happened to our page. And, actually, after that, April 3 they shut us down.

At about 3 a.m. the next morning, thanks to a lot of support from our members and other relatively prominent figures within the movement, Facebook actually—in a very rare occasion, they actually reversed their ban.

DESVARIEUX: Okay. And you had sent us an image of a post that someone—I’m assuming it was a post, or perhaps it was a message, where someone wrote that an army of Jews are assembling to remove your page; sleep happy.

HUMMEL: Yeah, we got a lot of vitriolic messages on our Facebook page, and it’s worth pointing out that a very large number of our support base are Jewish. As a matter of fact, our chief administrator is Jewish as well. So when they come at us with that sort of propaganda, we really don’t take it very serious. But he did tell us that an army of Jews were out to disband our Facebook page. The very next day, we were shut down.

DESVARIEUX: And it’s not irrational to use that language, “an army”, because as we have discussed previously, that Israel has actually created a army of bloggers to target anti-Zionist websites. Is that correct?

HUMMEL: It’s correct. As a matter of fact, on January 19, 2009, Haaretz, they reported specifically in their article that Israel recruits army of paid bloggers, that it was actually the Immigrant Absorption Ministry of Israel put out a memo seeking bloggers to disseminate information that was very pro-Israeli so they could detract on the dialog and the narrative that was circulating Facebook.

DESVARIEUX: Okay. Well, thank you so much for joining us, Derek.