Protesters condemned British support for the Saudi-led war on Yemen and railed against the red-carpet welcome extended to its chief architect, Crown Prince Mohammed bin Salman, who has a long record of shocking human rights abuses

Protesters condemned British support for the Saudi-led war on Yemen and railed against the red-carpet welcome extended to its chief architect, Crown Prince Mohammed bin Salman, who has a long record of shocking human rights abuses 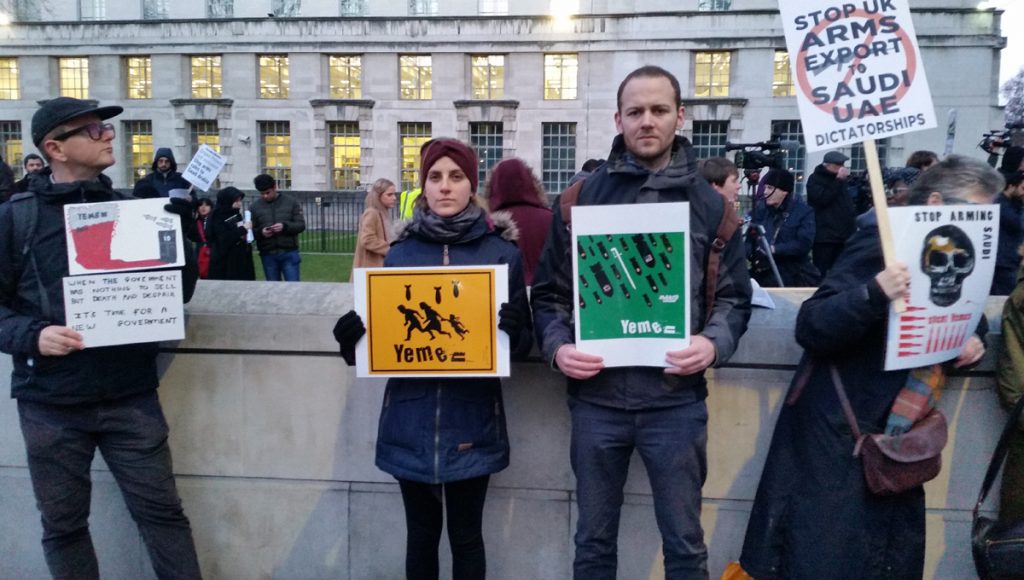 MOHAMED ELMAAZI: Hundreds of demonstrators came out to protest the visit of Crown Prince Mohammed bin Salman on Wednesday across the street from the British Prime Minister’s residence at Number 10 Downing Street. I spoke to demonstrators at the rally, as well as to some of the organizers of the rally at a press conference the day before.

CHRIS NINEHAM: My name is Chris Nineham. I’m from the Stop the War Coalition and I’m here because we’re part of the campaign; we’re part of the coalition that is organizing the protest tomorrow against the visit of Mohammed bin Salman. I mean, there’s so many reasons for protesting against him. He’s the leader of one of the most backward and barbaric regimes in the whole world. It’s a very, very, very reactionary and authoritarian regime. But for us the main purpose for the, the main motivation for the protest is that it is bin Salman is the main protagonist of a war in Yemen that is causing one of the biggest humanitarian crises on the globe.

JOHN GING: After three years of conflict, conditions in Yemen are catastrophic. A record 22 million people are in need of humanitarian assistance or protection. About 400,000 children under the age of five are so severely malnourished that they are 10 times likelier to die without treatment than their healthier peers. Nearly 1.1 million people are suspected of having cholera, and this has been reported since April 2017 in what experts called the world’s worst cholera outbreak. And estimated 3 million women and girls are at risk of gender-based violence.

MOHAMED ELMAAZI: United Nations reported at the beginning of last year that a child under five in Yemen dies every 10 minutes due to preventable illnesses such as cholera. If correct, that would mean that within the last 12 months alone, more than 52,500 children have died as a result of this war that is entering its third year. Such victims of the war consistently left out of the death toll when reported by most Western corporate press who continue to use the ever-stagnant figure of 10,000 dead Yemenis.

CHRIS WILLIAMSON: I’m Chris Williamson, I’m the Labour MP for Derby North, and I’m here today to express my solidarity to the people who are complaining against the visit of the Crown Prince of Saudi Arabia, Mohammed bin Salman, who I don’t believe has a place being given the red carpet treatment by the government-

MOHAMED ELMAAZI: The second day of the three-day visit is International Women’s Day, an irony that could not have been lost on either Mohammed bin Salman or the prime minister, given the Saudi regime’s treatment of its citizenry. The 32-year-old Crown Prince visited Buckingham Palace, Downing Street, and reportedly had dinner with Prince William and Kate Middleton. The Press Association says he met the Archbishop of Canterbury Thursday morning and then spent the afternoon with the prime minister at her country residence 40 miles outside of London.

CHRIS WILLIAMSON: But it seems Theresa May and the Conservative administration are prepared to do business with any despotic regime around the world so long as they can turn a quick profit.

CHRIS NINEHAM: We’ve got an anti-war leader of the Labour Party; we still need to campaign to actually make sure that we have an anti-war Labour Party. Foreign aggressions and militarism is deeply entrenched in the British establishment. There’s no question about that. It will be a huge struggle to change foreign policy. I think that’s true and that’s important. It’s also true that there are quite a few countries around the world who once were colonial powers who now have just become normal countries.

SINN FEIN MEMBER: Sinn Fein believes in a world order underpinned by principles of peace, liberty, and universal human rights, and economic and political democracy. The actions of a British state, while hysterically proclaiming to be champions of these values, are directly responsible for the unraveling of any semblance of social order based on talks on human rights.

KEVIN BLOWE: What’s interesting about this is the number of police that are here. We have had so many, there’s about 18 van loads of police for what was a relatively small demonstration. I think it’s pretty evident that the reason why this heavy police presence here is because of concerns of over a piece of what happened when Shimon Peres toured country. There were genuine concerns that people would block the roads and prevent bin Salman from leaving Downing Street.

MIKO PELED: I’m here to support this protest that is calling to end sending arms to Saudi Arabia, that calls on Saudi Arabia to end the massacre in Yemen.

MOHAMED ELMAAZI: We asked Miko Peled what he thought about the increasing normalization of relations between the house of Saud and the state of Israel.

Well, Netanyahu said several months ago in an interview that Israel’s relation with the Arab regimes and the Muslim regimes has never been better. And this is very true, and this is very sad because these are mostly regimes that have no legitimacy and do not speak for the people, and this is working against the Palestinians and against the cause for justice in Palestine.

MOHAMED ELMAAZI: One thing seems clear: Given that Middle East Eye is just now reporting that the British government is selling even more weapons to Saudi Arabia than previously believed, due to its use of secret weapons export licenses. Human rights and international law appear to have little, if any, role in British foreign policy, at least as it relates to Yemen. For The Real News Network this is Mohamed Elmaazi in London.