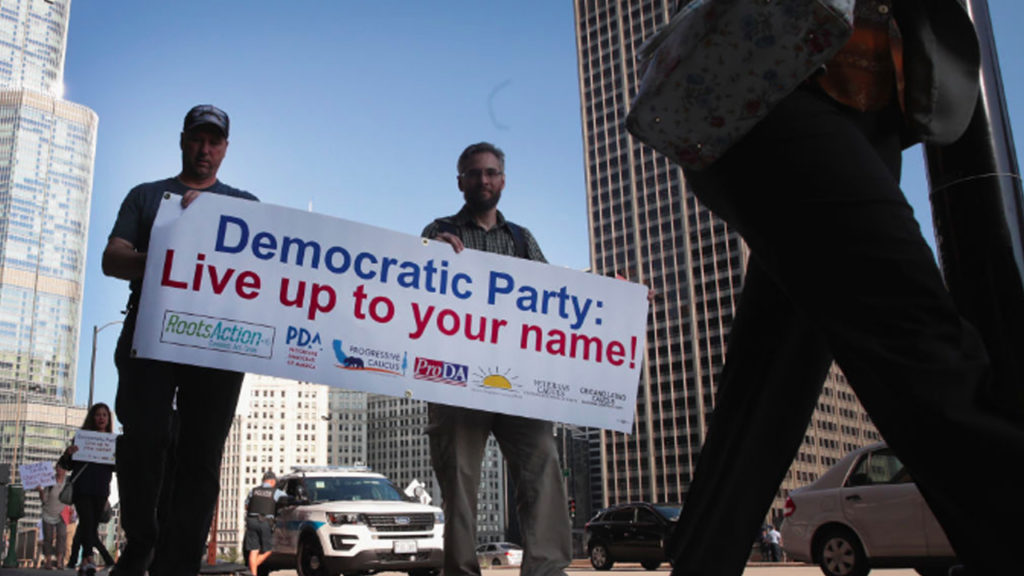 JAISAL NOOR: Democrats have gathered in Chicago to vote on reforms aimed at uniting the party and bringing new voters into their fold after their stunning defeat in 2016. In the spotlight are superdelegates; party members or elected officials who aren’t chosen by voters, but get to help decide the party’s presidential nominee.

PROTESTOR: No superdelegates, or whatever you’re calling them now.

JAISAL NOOR: Superdelegates were a flashpoint in 2016. Before any votes were cast, a vast majority of them backed Hillary Clinton over Bernie Sanders.

SCOTT HOULDIESON: The role of the superdelegates in the 2016 election really gave the voters the idea that the election was already settled before the first vote was cast.

JAISAL NOOR: Youth activists carried out a protest to demand the DNC reinstate a shortlived ban on contributions from the fossil fuel industry.

One reform backed by DNC Chair Tom Perez and approved by the Rules Committee would prevent superdelegates from voting on the first ballot of the party’s convention. Its been decades since the nomination process made it to a second ballot.

TOM PEREZ: This is a journey to form a more inclusive, just, successful party. That’s what it’s about. And again, I want to say thank you. We’ll have more to discuss tomorrow. And I look forward to bringing this matter to closure on Saturday.

NORMAN SOLOMON: It’s an important reform that is being proposed even from the chair, now, of the Democratic National Committee, Tom Perez, because of pressure from the grassroots, and because of disgust and anger coming out of the 2016 election to have the whole process badly skewed by superdelegates, and that whole process.

JAISAL NOOR: But some superdelegates, like Bob Mulholland from California, are fighting back. They’re hoping to gather enough support to halt the decision.

BOB MULHOLLAND: Many of us are appalled by somebody taking away the votes of governors, congressmembers like John Lewis at our national convention. I’m embarrassed that the Democratic Party is pushing this through. And Tom Perez has told us many times on the phone and in memos that the automatic delegates have never been an issue. They’d never change [what] the committed delegates. They’re like the rest of them. Some are for A, some are for candidate B. But we have a perception problem. You know what perception means? Fake news. [Don’t know] if the Russians were pushing this, but clearly it’s fake news.

SELINA VICKERS: Bernie Sanders won all 55 counties in West Virginia, but- he was very popular in West Virginia. But after the superdelegates weighed in, Hillary Clinton won the state of West Virginia with only winning 36 percent of the vote. Now, tell me how that is democracy. Tell me how that encourages people to come out and vote. Everybody that voted for Bernie, basically their vote didn’t count.

BOB MULHOLLAND: West Virginia’s not voting for our candidate, whoever we have for president. That particular person you’re talking to doesn’t support any of our Democrats.

SELINA VICKERS: The Democrats, anybody who wants to do right for people, they need to win every state and every type of people. And I, West Virginia has been manipulated and the people have been used and abused for years and years and years. And we need representation. We need our vote to count.

JAISAL NOOR: Other proposals on superdelegates were defeated at Thursday’s Rules and Bylaws Committee hearing. One would have prevented superdelegates from publicly endorsing candidates. Another aimed at scaling back the number of superdelegates instead of the proposal to take away their first ballot vote.

The Real News will be following developments leading up to Saturday morning’s vote. For The Real News, I’m Jaisal Noor in Chicago.