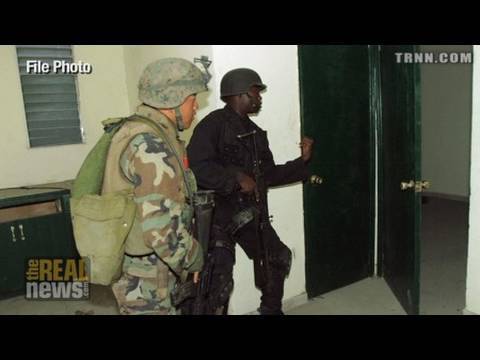 DIDIER DOMINIQUE, BATAY OUVRIYE, HAITI: Thank you for you to welcome me.

JAY: So talk a bit about organizing such a union in Haiti. You were telling me before that much of what you do has to be done clandestinely. Why?

DOMINIQUE: Yeah. Well, that’s because the government industry in Haiti, like many places else in the world, but in Haiti above all, because of the cheapest labor in America and one of the cheapest in the world, to maintain the wage, very low wages, they have to have a repression very hard, not only on the unions. You cannot have at all in the government factories, for instance.

JAY: And most of these garment factories are in what they call "free trade zones".

JAY: And in these free trade zones, you’re free to trade, but you’re not free to organize.

DOMINIQUE: No, not at all. You even maybe not free to leave, because the wage—.

JAY: What does that mean?

DOMINIQUE: Well, the wage is so low that the workers cannot leave with that wage, with that salary. So, for instance, they have always to borrow to leave. And that’s why it’s one of the country that we have most boat people going to Bahamas, Saint Lucie.

JAY: What’s the average wage for people working in those factories?

JAY: And much of this clothing’s going to the Canadian-American market.

JAY: So what’s happened to this industry since the earthquake?

DOMINIQUE: Well, those industries in the earthquake, many things. One, two of them collapsed and killed something like 1,500 workers, and nothing happened to the family of those workers. They just put the bodies and throw them away, because it was a very large mess, you know, after the earthquake—250,000 people died, and the workers passed away. You know, there was taking the bodies, and the workers passed away like that. We tried to put it in court about the workers themself who died, but we didn’t find the families, we didn’t find the bodies, we didn’t have any proof concrete for the death of the workers. Okay, that’s one thing. The other thing is that the whole country more or less—and above all Port-au-Prince, the capital—stayed closed, mostly without electricity, without telephone, without water, without anything [inaudible] during two or three weeks. And after one month the factories opened again, and the owners said that we have lost time, so we have to work harder, and they put extra hours without payment on these hours.

JAY: No, without paying overtime.

DOMINIQUE: Overtime. Exactly. And also putting a higher quota. And so [inaudible] production was very, very much higher.

JAY: They’ve rebuilt new factories? Or these are some that still remain?

DOMINIQUE: No, no, no, no, no. The third thing is that, exactly, after the additional quota, and that some of the factories are not safe, because they are not checked by the ministry of public buildings, and they open. And you don’t know, because till now there are some replicas, you know, [inaudible] sometimes, and you cannot assure what will happen if [inaudible] collapse and if it collapse to the workers. So it’s dangerous, it’s risky, completely risky, and the factories maybe before everything.

JAY: Given how weak the Haitian state is now and the Haitian security forces, how do they enforce something like you can’t have a union? Why can’t—under these conditions, why can’t the workers simply say, okay, now we are going to have a union?

DOMINIQUE: No, no, no, [inaudible] law against a union.

JAY: Well, you were saying in these free trade zones they can’t have unions.

DOMINIQUE: [inaudible] But in fact, in fact, concrete fact, now, you can have a union, because in the labor code there is one article, key article, saying that the owner can say that he doesn’t want to work with somebody. And when he fired 300 people in a union—not 301, not 299, but 300 of the union—they say, no, I’m not dismissing union people; I don’t want to work with those people. And, you know, the state, the government, in the history of Haiti, in fact, little by little, after 203 years of independence, little by little, the class struggle, but also the occupation, the different occupation of US or France or Germany, destroyed in fact the resistance of the people, and destroyed also the capacity of the state. That’s why, for instance, the state in Haiti is so lack of capacity.

JAY: But if after the earthquake, if an owner wants to carry on that way, he still needs the power of a state and a police force to reinforce his rights as the owner.

JAY: So to what extent is there an existing police force that can really play that role? And let me tie this to another issue. There’s a lot of critique about the role of the American aid being militarized and the presence of US troops. Are they playing a role in terms of domestic issues like this?

JAY: So the Marines get—help—in a sense, they’re playing the backup role for the owner to be able to say, "You 300 get out of here if you’re organizing a union."

DOMINIQUE: Exactly, exactly, exactly—the status quo, the disrespect, the non-respect of the law, and the total immunity that the capitalism has in Haiti now. So this situation is also at the same time—and even more after the earthquake—very explosive, very tense, very [antagonistic], let’s say, in terms of class struggle. And the owners of the multinational know that. They tell that in such a way to the government, who send militaries and police people to control the situation. And the repression, for instance, in 2006 was very high in the poor neighborhoods and the workers neighborhoods, because there was struggles going on. In 2008 there was a very large, in the whole country, uprising of the hungry people because the Haitian people was coming [inaudible] at the end of—. And the MINUSTAH played a repression role, killing people [inaudible] and also killing people, so that that role of the MINUSTAH was clear in that year, 2006.

JAY: This is the UN mission, yeah.

DOMINIQUE: The UN mission in 2006, and above all in 2008. And after the earthquake, the situations were so chaotic that the US now had to send more people. First the UN mission add 3,000 soldiers more, and the Marines came with 10, 15, or 20,000 Marines in Haiti to control the situation.

JAY: Well, in the next segment of our interview, let’s talk about the issue of hunger and the whole struggle about food.

JAY: Please join us for the next segment of our interview on The Real News Network.

Didier Dominique is a trade unionist and a prominent spokesperson for Batay Ouvriye.