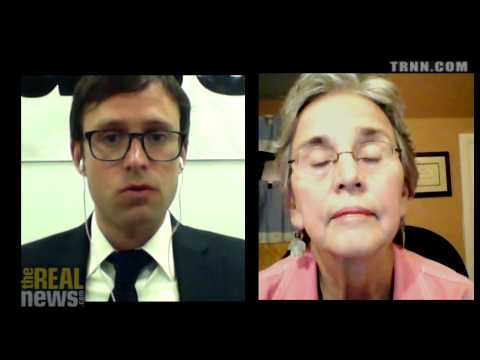 JESSICA DESVARIEUX, TRNN PRODUCER: And Governor Corbett has said that education cuts are necessary to close the budget gap. But in June, the GOP-controlled state legislature passed a corporate tax cut that’s estimated to cost the state $600-$800 million a year. That’s more than double Philadelphia schools’ deficit for the next fiscal year. Daniel, can you explain the role of powerful interests in changing the education system in Philadelphia?

DANIEL DENVIR, REPORTER, PHILADELPHIA CITY PAPER: Yeah. Well, first, on the revenue side you do have Governor Corbett saying that there’s just not enough money and cuts have to be made. Yet he has allowed corporate tax breaks to be put in place. And perhaps even more importantly, he has refused to place a significant tax on natural gas drillers who are exploiting massive energy reserves in Pennsylvania’s Marcellus Shale. You also have tons of tax loopholes allowing corporations to shelter money in Delaware that there have been many proposals to close, and he refuses to do so. So there is revenue out there.

On the city level, you have major corporations like Comcast, you have major nonprofits like the University of Pennsylvania who are getting major property tax breaks, or in the case of these wealthy nonprofits, not getting taxed at all.

So on both the state and the city level you have a lot of powerful interests that could be contributing more to schools that are not doing so and politicians, starting with Governor Corbett, coming on down to Mayor Michael Nutter in Philadelphia, are not making them do so. So that’s one piece.

On the other piece–and Eileen was speaking about that a moment ago–you know, these budget cuts have wreaked havoc in schools in Philadelphia and in school districts around the state. You know, there are 3,000 fewer staff positions in Philadelphia right now than there were in June, and that’s having a real disasterous impact, from class sizes to the lack of school nurses to the lack of school counselors.

And rather than doing what’s necessary to raise those funds to close that budget gap, what people like Governor Corbett are doing is instead using the budget crisis as leverage to try to break the teachers unions and break other unions in the district. That $45 million that Eileen referred to are federal dollars that the Obama administration released to go to Philadelphia public schools. But instead of giving them to Philadelphia schools where they belong, Governor Corbett is holding those dollars hostage until the teachers union makes massive concessions. And the teachers union, teachers in Philadelphia already make 19 percent less than some suburban counterparts. So by cutting wages and benefits for Philadelphia teachers, we’re going to make it all the harder to attract the best teachers to teach in some very challenging environments, where poverty is very high and resources are very low.

And these education reform groups, Michelle Rhee’s group, etc., they’re–a constellation of them throughout Philadelphia and Pennsylvania that are receiving funding for various powerful interests–they’re working with Governor Corbett to do this. And they claim to want to improve teaching, but it’s hard to see how that’s the case if they want teachers to take a salary cut.

DESVARIEUX: Eileen, you are actually a part of a parent staff group and have been warning about the consequences of such cuts. What is your group doing now to address this crisis?

And sadly, you know, as Dan said, we don’t know whether a nurse would have made a difference in this situation. However, more hands, as I said, more hands, more eyes, and more ears are always useful in preventing a disaster.

From Occupy 440 [incompr.] the Alliance for Philadelphia Public Schools. It’s a group of people that we met on the picket line in 2012. We’re current, laid-off, and retired teachers, librarians, nurses. And what we have been doing is trying to let the public know about those special interest groups that Daniel mentioned, the Philadelphia School Partnership, organizations like Michelle Rhee. Her organization came to Philadelphia last month. We were outside handing out literature letting people know about Michelle Rhee’s organization. Two weeks ago, there was a meeting at the Union League where the Philadelphia School Partnership and other philanthropists met. They paid $50,000 to attend this meeting, which was closed to the public, and they were discussing ways of solving a public education crisis which was artificially created by our governor.

So we are basically trying to let people know that the public school system is a viable organization. Some of the best schools in the state are located in Philadelphia–Central High School, Masterman girls high, the School of Engineering and Science. And all of that gets lost in a discussion of schools that are not doing so well because of poverty and cutbacks.

DESVARIEUX: Okay. Well, thank you both for joining us.

DENVIR: Thank you very much.

Eileen DiFranco is a certified School Nurse in the Philadelphia School District and an active member of the Alliance for Public Schools.

Daniel Denvir is a reporter at the Philadelphia City Paper and contributor to The Guardian, Salon, The New Republic, VICE, and The Atlantic Cities. He covers politics, cities, poverty, eduction, and criminal justice.