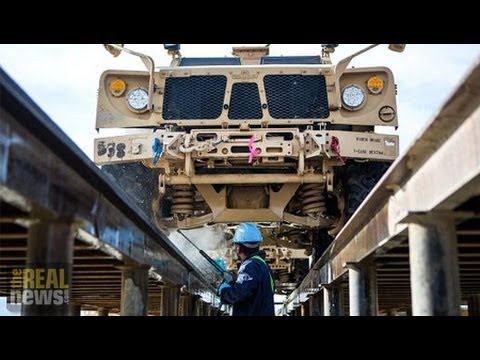 A recent article in Newsweek revealed that federal government pays twice as much for private domestic contractors compared to civil servants. Some on Capitol Hill have been bringing more attention to this glaring statistic, like Democratic senator Claire McCaskill. She chaired a hearing last year exploring the difference in cost between contractors and federal employees. Here’s what the senator had to say.

DESVARIEUX: Now joining us is the writer of the Newsweek article, David Cay Johnston. He’s a Pulitzer prize-winning investigative reporter and bestselling author who writes columns for Al Jazeera America, NationalMemo.com, and Tax Analysis. And he’s a contributing editor to Newsweek. He also teaches the business property tax law of the ancient world at Syracuse University College of Law.

Thanks for joining us, David.

DESVARIEUX: So, David, as the axiom goes–basically that in the U.S., for-profit companies provide services more efficiently and cheaper than the public sector. What does your research show?

Now, proponents of contractors will argue that they can hire them on a short-term basis, whereas we tend to hire employees long-term. But I don’t think that’s a significant defense to the fact that these costs are so high. Last year, contractors were able to charge the government as much a $763,029 per employee.

DESVARIEUX: And you also hear from those who are in favor of federal contractors saying that essentially the federal contractors fill a void. I mean, why is there a rise in federal employees if there’s not this need? Can you speak a little bit about the history? How did this all come about?

JOHNSTON: Well, it traces back, I think, pretty much to the rise of the organizations prompted by the Lewis Powell Memo. In the 1960s, the consumer movement was doing quite well, and Ralph Nader came along with all of his research and insights. And you’ll remember General Motors hired a prostitute in an effort to compromise him, something that wouldn’t work with Ralph. And as a result of the rise of the consumer movement, the U.S. Chamber of Commerce hired a very prominent and brilliant lawyer in Richmond Virginia by the name of Lewis Powell, and he wrote a memo on how to bring the press to heel, how to stop the consumer movement, and how to make sure that America was remade in the image of big business. Powell, of course, later served on the U.S. Supreme Court after he was nominated by Richard Nixon.

And shortly after Powell’s memo recommending that the right set up what I call ideological marketing organizations–they’re just like advertising agencies, but instead of selling you shampoo or beauty products, they’re selling you economic and political ideology–we got the Heritage Foundation, we got Cato, which, it turns out, you know, while it’s a nonprofit, is actually owned by the Koch brothers, and ten other big pro-business right-wing organizations. And they began saying general workers efficient; federal workers lazy, stupid; federal workers can’t do anything; we should be hiring business–they can do things. They have no factual support for this. It was ideological.

Paul Light, a professor at New York University who holds the Paulette Goddard chair, named for the actress and genius Paulette Goddard, has spent years studying the costs of workers. And he has shown how we have a shadow federal workforce through these contractors of a couple of million people. And, of course, when ordinary federal employees go to a retreat, if they just engage in line dancing, as IRS employees did as a team-building exercise, this will be excoriated as an awful waste of the taxpayers’ money. But corporate contractors, why, they have golf outings, they go to very expensive resorts for their meetings, and the government just pays the bills.

DESVARIEUX: Alright. David, I want to go back to your Newsweek article, because you mentioned the two-tier system of contracting, with for-profit companies versus nonprofits. Can you explain that further?

Then the government hires nonprofits. And they can range from Catholic family services, people who run soup kitchens. There’s a whole host of nonprofits. Those nonprofits are never paid in full for the costs of services. They are very closely monitored on what they pay. When I asked Rick Cohen, who used to get such contracts and now writes about them for a nonprofit publication, what would happen if there was a proposed just six-figure salary–$100,000, not $762,000, but $100,000–he just cackled. I mean, it was absurd to think anybody would do that. They would be hassled over salaries of less than $50,000.

And this is indicative of how the federal government has been changed. My book Free Lunch, which came out in 2007, and my book The Fine Print in 2012 in good part are about how companies have figured out–many of them have figured out that it’s easier to mine the Treasury for gold than to earn money in the marketplace.

DESVARIEUX: And we should also note that many of these private contractors receive government funds, yet they have set up tax havens to avoid paying U.S. taxes. And a number of private companies have been caught cheating the government, but only receive relatively small penalties. Can you provide some specific examples of these types of companies?

JOHNSTON: Yeah. In 2004, Norm Coleman, a Republican senator from Minnesota, got a report made on tax cheating, which I had been writing about at The New York Times, by Pentagon contractors. Every ninth contractor was found to be cheating. Many of them were not withholding taxes, which is illegal. The government would not–however, the Pentagon would not name any of these companies, claiming that was confidential taxpayer material protected by laws Congress has passed.

And it turns out that once ABC Widget Maker is caught not paying his taxes, the Pentagon has to fire them. And they do that on a Friday. And on Monday, DEF Widget Makers opens up with a new contract, and things just continue on. This is an absolutely scandalous practice.

The other thing that goes on is companies renting a Bermuda mailbox to avoid paying U.S. taxes. And I did front page stories about that in the New York Times around the year 2000, a series of them. Of all the ironies in the world, the prime contractor for the IRS website is Accenture, a big consulting firm that used to be part of Arthur Anderson, and which at the time had its headquarters in–you guessed it–Bermuda.

DESVARIEUX: Alright. And can you speak to any other companies as well, just so our viewers know?

JOHNSTON: [incompr.] ran a company that at the time was led by a former Green Beret, who was telling everybody and anywhere what a patriot he was. He moved his company on paper to Bermuda to avoid about $40 million a year in federal income taxes. And as a result of my work, there was a five-hour floor debate in the House, where the Republicans and the Democrats each tried to bid up how they were going to be tougher on this than the other party.

The Republicans got their bill passed, which appeared to be really tough–no federal contracts for companies that abandoned the United States and refused to pay all their taxes by setting up a mailbox in Bermuda* (asterisk). What nobody but me reported was that they put in a clause which said, but your American subsidiary can have a contract with the U.S. government.

DESVARIEUX: So, David, we’ve established that the system clearly has some major issues it needs to deal with. How can the federal contracting system be reformed to cut down on waste and fraud?

JOHNSTON: Well, the first thing I would do is make it a criminal offense for a federal contractor of any kind or any of its officers or directors to make, directly or indirectly, any campaign contributions.

You know, the bureaucrats at a federal agency can’t make campaign contributions to up their budgets. You never heard of the Bureau of Mines going out and trying to make sure that a pro-mine inspection congressmen got elected. But contractors do this all the time.

And so I think we need to put up a legal barrier that says, if you want to be a contractor for the federal government, you’re not going to be involved in electoral politics. I think that would be the first step to improve the process.

The second is we need to have real oversight. You know, this is a Congress, particularly this year, that’s done literally nothing. In 2010, John Boehner said, you know, put us in control of the House, and the Republicans will be focused on jobs, jobs, jobs, and jobs. I’m sorry. We’re almost at the end of 2013. There’s never been a jobs bill. There has been cutting off unemployment for people. There have been virtually no hearings on things like contractors.

But the salaries of federal workers have been frozen for several years. They’re about to get a small raise, except now we’re going to increase the share of federal workers’ compensation that goes to their pensions, which is in effect a cut in their cash wages.

And the reason all this is going on? Because it’s in the interests of members of Congress to have a contractor system that feeds their campaign funds.

Alright. David Cay Johnson, Pulitzer prize-winning investigative reporter. Thank you so much for joining us.

David Cay Johnston was called by The Washington Monthly, “one of this country’s most important journalists” and the Oregonian newspaper compared his work to the great muckrakers Lincoln Steffens, Ida Tarbell and Upton Sinclair. Johnston won a Pulitzer Prize in 2001 for his exposes of tax loopholes and inequities.