Trumpcare to Benefit the Wealthiest and Healthiest 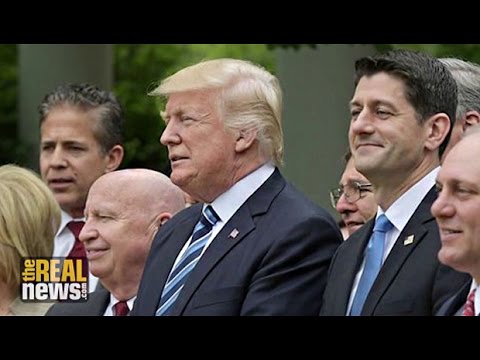 Last week President Trump hailed the House of Representatives for the passage of the American Health Care Act, tweeting “It’s going to be fantastic health care. Right now Obamacare is failing,” he wrote. But is it failing? Last week, TRNN host Aaron Mate asked Patty Eakin, the President of the Pennsylvania Association of Staff Nurses and Allied Professionals, what she thought would happen if the Trump Administration’s American Health Care Act were to pass the Senate and be approved and become law. Here’s what she said.

PATTY EAKIN: I think there are a lot of major impacts for this bill. One of them, as you said, is that people on the Medicaid expansion, and those are the folks who are the working poor, the people who have the low wage jobs at McDonald’s or maybe at the airport or some other low wage job who really can’t afford health insurance. These are the people who, like 1.4 million of them across the country have been able to get health insurance and many of them are going to lose it. In fact, the entire project could lose up to 24 million people completely who will not have any health insurance.

The Affordable Care Act really took care of about 40 million, brought them back on to health insurance. Without a revenue stream that’s dependable, hospitals are going to probably close or cut services. Because these patients will come to the hospital anyway, and the hospitals will start feeling the pinch of low reimbursements again and they will start having layoffs, and services will be cut back and it will be really bad for patients and for the workers.

SHARMINI PERIES: So that’s a nurse on the front lines. Now, the bill still needs to pass the Senate where it will for certain face difficulty because many Republicans senators have already come out asking for substantial changes to the bill. Joining us now to analyze the Republican health care proposal and it’s chances of passing is Dean Baker. Dean is co-director of The Center for Economic Policy is the author of Rigged: How Globalization and the Rules of Modern Economy Were Structured to Make the Rich Richer. Thanks for joining us, Dean.

SHARMINI PERIES: Dean, the Republican American Health Care Act is said to repeal substantial parts of the Affordable Care Act. Do you, first of all, agree with Nurse Eakin there, and who are the winners and the losers of Trumpcare?

DEAN BAKER: She’s absolutely right. Most immediately it’s large cutbacks in Medicaid. Of course, the Obamacare, ACA, expanded Medicaid and most states took advantage of that. I think there’s still about 10, I forget the exact number, all Republican states that did not take advantage of that. But that helped cover somewhere in the order of 10 million additional people and this will cut back $800 billion from Medicaid, that’s $80 billion a year over the next decade. Give you some perspective, there’s roughly 70 million beneficiaries, so you’re talking about $1100-$1200 per person per year, so you’re going to see a lot of the people who are newly covered lose their coverage and again, the point she was making that that’s bad news also for providers for hospitals, that’s absolutely right.

I should point out the flip side, this doesn’t get emphasized enough, this is about tax cuts for the wealthy, so basically what the Affordable Care Act did was extend Medicaid, it also subsidies in the exchanges, but it paid for this with taxes that almost exclusively hit people in the top 1% or 2% of the income distribution. In reversing the Affordable Care Act, they’re going to reverse those tax cuts and that’s a big chunk of money in the pockets of some of the richest people in the country. That’s a big part of their plan.

SHARMINI PERIES: Now Dean, one of the most contentious issues of this new proposed bill by the Trump Administration is the issue of pre-existing conditions. The Trump Administration’s bill almost didn’t pass the House last week because of this component requiring insurance companies to provide coverage to people with pre-existing conditions were going to be removed. But then they added $8 billion to the bill so that lower premiums could be subsidized. Does this fix the problem?

DEAN BAKER: No, it doesn’t come close to fixing the problem, and just to be clear what goes on here, most of us are reasonably healthy and that’s a good thing and that means our health care bills are relatively low, so insurance companies are delighted to cover us. We give them a check every month and that’s it. That’s true for most people and that’s a great thing. Who the hell wants to go to a doctor, go to a hospital? That’s a great thing.

But the point is a number of people do have health conditions, they are expensive and if you could exclude them from the pool, then everyone else’s insurance is cheaper, but the people who really need care aren’t getting it. That’s in this proposal, what they’re saying is okay, you don’t have to leave it up to the states, you don’t have to cover people for pre-existing conditions, but then they’re saying “Okay, we’re good guys,” and I’m saying that advisedly, because it is all guys, quite explicitly who are writing this stuff, “We’re going to have a high-risk pool and you have you’re a cancer survivor, you have a heart condition, you have diabetes, you just go in the high-risk pool and we’ll take care of you.”

They threw in the 8 billion over five years, so it’s a bit over a billion a year. The cost of covering people in these high-risk pools is in the tens of billions. This just doesn’t scratch the surface. This is kind of a feel-good thing, but the reality, and I’m saying this based one experience because high-risk pools have been tried, they’re always underfunded, people can’t get in them, or if they do get in them, they still find they have premiums they can’t possibly afford.

This is kind of a joke and that was to my view perhaps the most important part of Obamacare, was that if you had a health condition, you could still get coverage, and they’re destroying that head on.

SHARMINI PERIES: Does this include, say, pregnancy? If you were pregnant and you’re looking for coverage and is that considered a pre-existing condition if you didn’t have coverage earlier?

DEAN BAKER: They’ve been playing a game on this. That would be up to the states, so they’ve been jumping on people saying, “Oh, they’re excluding pregnancy.” No, they didn’t exclude pregnancy, they just give states the option, so most states, one hopes, will say that if you’re pregnant, you’re covered by your health insurance. But certainly a state has the option to say, “Nah, it’s a pre-existing condition, if your insurance doesn’t want to cover you, they don’t have to cover you.”

SHARMINI PERIES: Finally, Dean, do you expect this bill to pass in the Senate?

DEAN BAKER: This bill, as it is, has absolutely zero chance in the Senate, but they’re best bet is that the Senate starts from scratch. They’ve already said this and they almost have to, because this bill was kind of a joke. They rushed it through, no one had a chance to read the whole thing, they didn’t know what was in it, the Congressional Budget Office didn’t score it. They just wanted something for Trump to be able to have his big party and say, “Hey, look, we passed something.”

The Senate’s going to feel the need, because the Democrats do have a voice in the Senate, they can’t stop it, but they could at least slow it down, they could force hearings. They will produce a different bill in the Senate and then they’re big hope is that it goes to conference and then after that, they’re going to come down on everyone with everything they have and they say, “You have to vote for this.”

Whether they come up with something that after the conference they can get a majority to vote for, pre-Comey I would’ve put it 50/50, today, maybe 1 in 4. Odds are I think they don’t get anything.

SHARMINI PERIES: Right, and then of course, one more thing, Dean. Now the upcoming 2018 elections is going to determine a lot of the future of the Trump Administration, and a lot of these Congressional seats are perhaps dependent on the reputation and the success the Trump Administration has had thus far, and health care’s at the center of all of this. What impact do you think it’ll have in the upcoming 2018 elections if they were to pass this?

DEAN BAKER: It’s potentially devastating. I mean, people never understood the Affordable Care Act and the benefits and I think the Democrats, President Obama, deserved a lot of blame for it. I mean, there were plenty of problems, I’ve discussed many of the problems with you, still had very high co-pays, high premiums, high deductibles, lots and lots of problems, but still there were enormous benefits and people did appreciate that. People feel very strongly about this point on pre-existing conditions, because even though most of us are healthy, you’re still talking about 20, maybe 30 million that have some type of pre-existing condition. Most people have someone close to them, either themselves or someone in their immediate family, who is in that category.

So saying that you can get coverage, that’s a really, really big deal. I think this is likely to be a huge issue in the 2018 election, which is a major reason I think Republicans are going to have difficulty passing it, because again, they’re not necessarily the smartest people in the world, they don’t necessarily care a lot, but they do follow the polls and they do know what’s going to make it difficult to get them re-elected.

SHARMINI PERIES: All right, Dean, as always, I thank you so much for joining us today.

SHARMINI PERIES: Thank you for joining us here on The Real News.