Bacon: NAFTA Hurt Workers on Both Sides of the Border 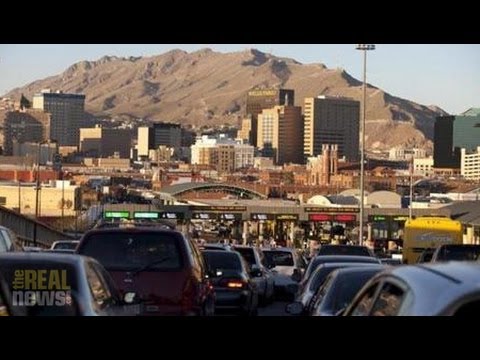 This week marks the 20th anniversary of the implementation of the North American Free Trade Agreement, or NAFTA. NAFTA made the United States, Canada, and Mexico the largest free trade area in the world, linking 450 million people producing $17 trillion worth of goods and services.

Now joining us is David Bacon. He’s an award-winning photojournalist, author, immigrant rights activist, who spent over two decades as a labor organizer. His most recent book is The Right to Stay Home: How U.S. Policy Drives Mexican Migration.

Thank you so much for joining us, David.

NOOR: So, David, this 20-year anniversary of NAFTA has been both celebrated and sort of mourned, depending on what side you lie on this debate. I wanted to get your response from this quote in The Economist that was just published earlier today. The quote goes:

“… Mexico—an emerging market hitched to two larger, rich ones—has been NAFTA’s biggest beneficiary. Import competition has improved Mexican manufacturing productivity; foreign direct investment has surged. More important, membership of NAFTA has shored up Mexico’s domestic political commitment to open markets, and provided a template for the country’s other free-trade agreements. . . . The deal has not closed the vast income gap with Canada and America … but it has helped make Mexico more stable and prosperous. That should be a cause for celebration on both sides of the border.”

David Bacon, what is your response?

BACON: Well, actually, I think that’s a pretty honest quote, because what it’s really saying is that NAFTA was a source of profits because of the way the markets in Mexico were opened to large corporations, especially U.S. corporations. So there were some people who benefited from the last 20 years of the agreement. And they include Mexican billionaires. Mexico created a large number of billionaires, especially during the first ten years of the agreement. One of them, Carlos Slim, went on to become the world’s richest person for quite a while. And U.S. corporations also did very well in Mexico because of this opening of the market.

Ordinary Mexicans, however, did very poorly as a result. And I think the best and the most telling statistic is that during the period of NAFTA, from ’94 to the present, about 12.6 million people from Mexico are now living in the United States. When the treaty went into effect, it was only about 4.6 million people. So 8 million people came to the United States overwhelmingly because they had little alternative to doing that if they wanted to survive economically. So NAFTA produced changes in Mexico which affected drastically the lives of ordinary working people and farmers.

This opening of the market essentially led to, for instance, Mexico losing a lot of its auto parts industry [that were] producing for auto manufacturers in Mexico. Mexico became an export platform, where the purpose of auto plants, assembly plants, parts plants was to produce for the U.S. market [inaud.] because [incompr.] other Mexican market, when in effect the income for most Mexicans really went down during the NAFTA period.

So what NAFTA did was it made Mexico even more of a kind of a low-wage reserve area in which U.S. corporations could then relocate production in order to make goods not for the sake of sale in Mexico, but for the sake of sale in the United States. So Mexico became tied very tightly to the U.S., but not in a way that benefited ordinary Mexicans. It benefited people at the top, but did not benefit people at the bottom.

So the average wage in a Mexican maquiladora stayed flat during the entire NAFTA period. So workers in a maquiladora today are making maybe $6, $7 a day. The price of a gallon of milk in a Mexican supermarket is not very much different from what it is on the U.S. side of the border. So a woman working assembling televisions for Sony or Sanyo or Panasonic in a maquiladora in Tijuana, for instance, has to work half a day just to buy a gallon of milk for her children.

So you find hundreds of thousands of workers who are living in neighborhoods, barrios, in which people are–the streets are unpaved, there’s no sewer system, people are stealing electricity from the wires because there are no social services or electrical services. People couldn’t afford to pay for them even if they could. And this is when people are working.

And, of course, by tying the Mexican economy so tightly to the U.S. one, what also happened is that when we went into a recession in the United States, we stopped buying what those factories were producing, which meant that hundreds of thousands of workers lost their jobs in those factories. Since the border was right there, a stone’s throw away, many of those workers really had no alternative but to cross the border and look for work in the United States if they wanted to survive.

So NAFTA led to increased displacement of people, it led to increased migration because of these poor working conditions. Those working conditions and those low wages were the selling point, really, to get corporations to build those factories and to invest in Mexico. So what NAFTA did was it created an incentive on the part of the Mexican government for holding incomes down, actually, for the vast majority of Mexican people as a way of kind of encouraging corporate investment.

And it wasn’t just holding incomes down and wages down. Other things happened as a result of this policy of trying to do anything to encourage corporate investment. One of the things that we saw in the last few years was the Mexican government declaring that the state-owned power and light company in Central Mexico no longer existed, because essentially they were setting up the electricity system in Mexico for privatization. As a result of that, they fired the 44,000 workers who worked for this state-owned power company and destroyed their union.

Now the Mexican government and the Mexican Congress and the new administration there has passed a change to the Mexican Constitution which will now allow for the privatization of Mexico’s number-one economic asset, which is its oil industry, and also the electrical industry. So certainly some people are going to gain by that. You know, you can call that progress or growth if you want to, but in fact for most Mexicans what it really means is that they lose control over the key assets, the key economic assets that the Mexican state and the Mexican government controls, in the interests of selling them off to private investors.

And at the same time, the people who work in those industries, they lose their unions, they lose their jobs, their wages go down. So really for most people it results in a loss. That’s why so many people are coming to the United States, as a result of that.

NOOR: David Bacon, thank you so much for joining us.

David Bacon is an award-winning photojournalist, author, and immigrant rights activist who has spent over twenty years as a labor organizer. He is an associate editor at Pacific News Service, and writes for TruthOut, The Nation, The American Prospect, The Progressive, and the San Francisco Chronicle, among other publications. Bacon covers issues of labor, immigration…