Reform-minded councilmembers propose reigning in Baltimore's all-powerful mayor, but will these changes be enough?

Reform-minded councilmembers propose reigning in Baltimore's all-powerful mayor, but will these changes be enough? 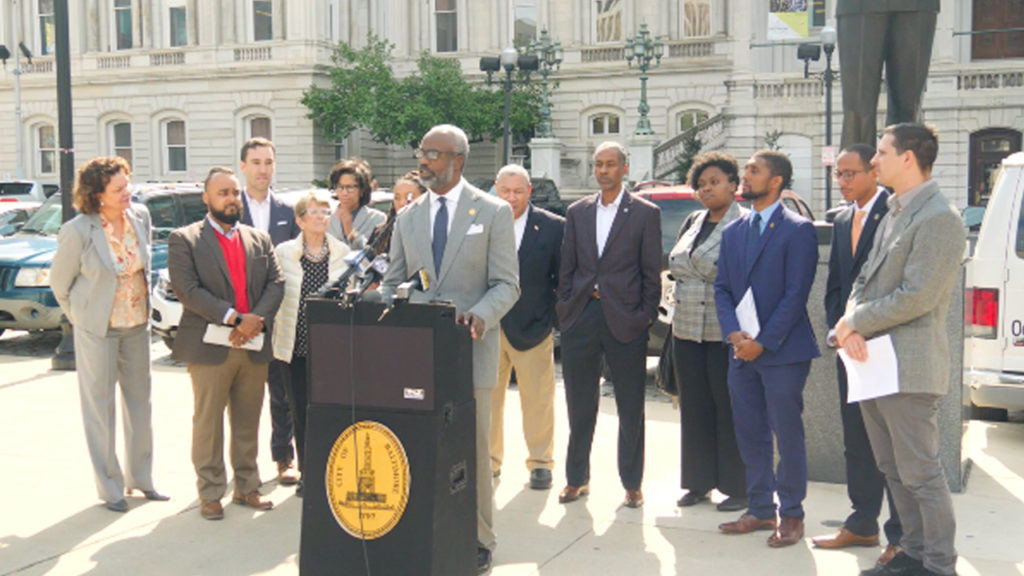 Days after a dramatic FBI raid of City Hall, lawmakers unveiled proposals for curbing corruption and curtailing the powers of Baltimore’s strong mayor system of government. This is Reverend Kobe Little, head of the Baltimore chapter of the NAACP.

JAISAL NOOR: And while the media spotlight has been on embattled mayor Catherine Pugh, progressives hope to bring long-sought reform to a city government they see as lacking transparency or accountability.

REV. KOBE LITTLE: We think that it’s important that while this legislation focuses on elected officials, that this conversation also expands to talk about the relationship between elected officials and the business community.

JAISAL NOOR: These proposed reforms do not preclude citizen-led efforts. And Councilman Bill Henry said voter engagement will be key.

BILL HENRY: I believe the ex-officio mayor has already commented along these lines also, is the importance of making certain that we have lots of community buy-in in any type of charter change. And so that’s one of the reasons why we’re going to be encouraging a year-long series of conversations about this.

JAISAL NOOR: Mayor Catherine Pugh, a Democrat, has been on a leave of absence for the past month after investigative reporting exposed a pay-to-play corruption scheme. They found that powerful corporate interests doing business with the city curried favor by donating hundreds of thousands of dollars to the mayor to support her Healthy Holly children’s books. Pugh has yet to be charged with a crime, but these troubling allegations prompted widespread calls for her to resign, and served as a stark reminder that there are currently few checks on the mayor’s power. Changing that will require amendments to the city’s charter. One way to do that is through the council. The mayor must also sign off, and then it goes to the voters at the ballot box.

On Monday, legislators outlined four proposed charter reforms. The first would allow the city council to remove the mayor. Currently the mayor can only be removed after a criminal conviction. It was introduced by Councilman Kris Burnett.

KRIS BURNETT: A charter amendment that would give the city council the power to impeach a sitting mayor who has been found to be incompetent, has performed misconduct in office, has been willfully neglectful of their duty or has been found guilty of a felony or misdemeanor while in office.

JAISAL NOOR: The second seeks to increase transparency around the city’s budget. This issue is key. The mayor currently has almost total control of setting the budget. The Council can only subtract from it. Currently the city spends over $500 million annually on policing–more than schools, health care, and youth combined. This was introduced by Councilman Bill Henry, who says giving the council more power of the budget could be a step towards participatory budgeting.

BILL HENRY: My expectation would be that if this charter amendment passes and the council actually has the ability to move money around in the budget, one of the things that we would have the option to do is create a fund that could be then further distributed in a participatory budgeting fashion.

JAISAL NOOR: Henry has also proposed reducing the number of votes needed to override a mayor’s veto from 12 to 10 of the council’s 15 members. Veteran lawmaker Mary Pat Clarke notes this change would have allowed the council to override the mayor’s veto of a $15 minimum wage bill in 2017.

MARY PAT CLARKE: If we’d had that supermajority instead of 12, we’d also have a $15 minimum wage in a couple of years, instead of ages away from the state.

JAISAL NOOR: A fourth proposal would create an executive that runs day-to-day city operations but still answers to the mayor. That was introduced by Councilman Brandon Scott.

BRANDON SCOTT: We are a city with extreme challenges, and we can no longer afford to have our mayor, no matter whom it is to be worried about the minutia of da-to-day operations of city government. We need that individual focused on the high-level issues facing our city by reducing crime, reforming our schools, improving public infrastructure.

JAISAL NOOR: Henry also says councilmembers are working on another key reform to the Board of Estimates, the body that approves city contracts, of which the mayor controls three of five seats.

BILL HENRY: So I do know that at least one, possibly two, councilpeople are working on charter amendments related to the Board of Estimates. I know that that’s where this gets a little bit trickier, because once you start dealing with the competition or the powers of the Board of Estimates, then you really are starting to get into the fundamentals of the strong merit system. So that’s where I think the public conversation will be about. Do we still want to maintain a strong mayor system but better balanced? Or do we want to drop the strong mayor system altogether and go for council manager, or something like that?

JAISAL NOOR: A series of proposed laws to increase transparency and give protections to whistleblowers were introduced last week by Councilman Ryan Dorsey.

RYAN DORSEY: With respect to ethics and ensuring transparency and the will of people who work here in Baltimore City to speak up when they see something’s not right.

KRIS BURNETT: I also hope is that the fair election fund will also make it so that folks who want to take money to run for office but do so really empowering the voters of Baltimore City will also act as that counterbalance, because one of the challenges that we’ve seen is running for office is particularly expensive, and particularly difficult if you don’t have the correct connections and know the right people.

JAISAL NOOR: Eric Costello, chair of the council’s judiciary and legislative investigations committee, told The Real News he likely won’t hold hearings on the proposed charter reforms until June of 2020. It’s unclear who the mayor will be at that time, and whether they would support such reform. But charter amendments can also come from the people. They require 10,000 signatures to get on the ballot, where they must get the support of a majority of voters. This week we’ll bring you the inside story of how major previous significant reforms were passed.

SONJA MERCHANT-JONES: Question P was put in place to further accountability of our city council members. We downsized from three six-member districts to 14 single-member districts, and I think it’s worked wonderfully.

JAISAL NOOR: And on May 7, join us at Ida B’s Table for discussion on power, corruption, and changing how Baltimore is governed, where we’ll examine if these charter reforms can support policies that make the city safer by reducing poverty and unemployment.

For The Real News, this is Jaisal Noor with Taylor Hebden.