1 out of 3 Bank Tellers in NY on Public Assistance 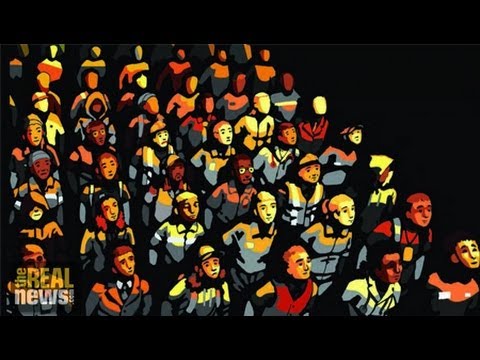 Here’s something you might not know. One in three bank employees in New York State are on public assistance. That’s according to a new report released by New Day New York Coalition titled Leveraging New York’s Financial Power to Combat Inequality. And this news comes almost two months after the University of California Berkeley Labor Center and University of Illinois published a study that said that more than 50 percent of fast food workers rely on public assistance programs due to their low wages.

Here to talk about the report is Deborah Axt. She’s on the board of the Make the Road Action Fund, which together with New York Communities for Change, ALIGN, and Communications Workers of America from the Committee for Better Banks wrote the report.

Thanks for joining us, Deborah.

DEBORAH AXT, BOARD MEMBER, MAKE THE ROAD ACTION FUND: Thank you so much for having me.

DESVARIEUX: So, Deborah, can you just described for us the conditions for the average teller in the United States banking industry?

AXT: Yes. I mean, what we’re talking about here are jobs that the public generally perceives to be entry-level jobs on a path to a professional career. And what they really are, often, is completely dead-end jobs, where workers are trapped in forcibly part-timed work, low-wage work, with high-pressure sales goals, sometimes wage theft, even. And, you know, these are really rough jobs. Workers report often being pressured to sell deals, products, bank accounts, credit cards that are not necessarily in the best interests of the clients, and that they realize this is true but have no ability to blow the whistle on these kinds of unethical practices at the banks.

DESVARIEUX: So what are your recommendations for alleviating some of these issues?

AXT: Well, the first thing is that we need to make sure that that workers have a path to speak out. We need to make sure that there are whistleblower protections in place in states and cities like New York and that we don’t give out subsidies. Right now we’re giving out hundreds of millions of dollars in subsidies to big banks in New York City and New York State alone with very little accountability for the job creation goals that are involved in those deals, and certainly with no checks with workers to make sure that they are being treated well and that their jobs are helping to lift people out of poverty.

DESVARIEUX: I’m sure there are some people listen to this saying that at the end of the day there needs to be some form of unionization. Is that your ultimate goal? Are you hoping that tellers eventually will organize themselves to form a union?

AXT: Make the Road, New York Communities for Change, ALIGN, and CWA that form the Committee for Better Banks have certainly had a long history of helping workers to organize into worker centers, into unions where appropriate. And so we believe strongly that workers need the right to organize and that they should be supported by the community members that we represent as well. And so we are here and would have their backs if that’s what they choose.

This is just the first step at looking at this industry. We have been actively organizing in car washes and supermarkets and in fast food restaurants, but we’ve just turned our attention to the banking industry to see what was going on with workers there and were shocked to discover that the treatment in the banking industry is much like the treatment in other exploitative low-wage industries. But this is a place that you wouldn’t expect it. This is the place where the boss, the CEO, is actually the boss of capitalism, right, the boss of our international economic system. You know, they’re billionaires. They are well compensated. This is an industry that certainly can afford to treat workers properly, to treat workers with dignity.

DESVARIEUX: And I’m sure the irony isn’t lost on our audience as well that you have people that are on the front line of the banking industry, they’re the ones who are actually–one in three of them are qualified for public assistance. And then you have CEOs who are making millions, hundreds of millions sometimes. What is your response to that, Deborah? What sort of evidence have you found that supports this?

AXT: Indeed. And we spoke to–we had about 5,000 conversations with bank workers across New York and other places in the country. We did another 200 formal surveys to document the conditions and have had a number of focus groups as well. And we have seen wages somewhere between $9 and $12 an hour. We have seen part-timed jobs that used to be reliable sources of income for bank workers. And we hear a lot about sales goals and sales pressure that really makes the pace of work unsustainable and that pushes workers to feel that they have to sell products to their consumers and their customers that they don’t think are in their best interest.

And so what is good for bank workers in this istuation is clearly good for consumers. We believe strongly that the collapse of our economy could have been prevented had we had protections in place allowing workers to come forward and speak up and blow the whistle on the shady practices that this industry was engaging in when we’re talking about mortgages and other kinds of products that were being sold to low-income and communities of color.

AXT: Thank you so much for covering this issue.