The Interests Shared by the Oregon Militia Movement, Koch Brothers and LDS Church

Chris Zinda discusses how groups such as those involved in the armed standoff in Oregon are influenced by the likes of the Mormon Church, the John Birch Society and Koch-funded Americans for Prosperity.

Chris Zinda discusses how groups such as those involved in the armed standoff in Oregon are influenced by the likes of the Mormon Church, the John Birch Society and Koch-funded Americans for Prosperity. 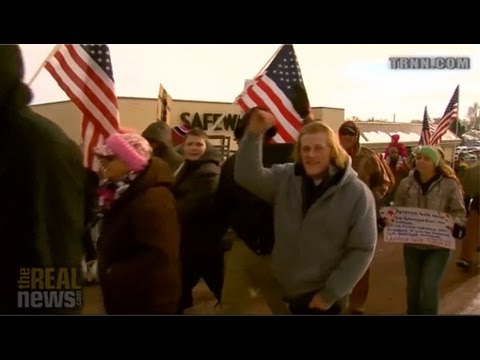 JAISAL NOOR, TRNN: Armed militiamen who some are calling domestic terrorists have occupied a federal wildlife refuge in Oregon and vowed to remain until their demands are met in what’s just the latest skirmish over federal land management in the West. Led by Ammon Bundy, son of infamous Utah rancher Cliven Bundy, they are demanding the release of two Oregon ranchers convicted of Arson: Dwight Hammond and his son Steven.

In a video published to YouTube, Ammon Bundy said his faith inspired him to travel to Oregon.

NOOR: But what hasn’t been as widely reported are the close ties between the movement represented by figures like Bundy and various corporate and political interests, including those of the agribusiness as well as the infamous Koch brothers.

Now joining us to discuss this is Chris Zinda. He’s a homemaker who’s worked for the National Park Service for ten years. He’s left the Park Service since then. He writes a biweekly column for the Southern Utah Independent. He wrote a piece on this subject for Counterpunch, titled Constitutional Crisis in the Heart of Dixie. Thanks so much for joining us.

CHRIS ZINDA: Thank you for having me.

NOOR: Let’s start with Bundy’s faith. He’s a Mormon, he’s a follower of the Church of Latter-day Saints. We just heard Bundy say God told him to travel to Oregon and carry out essentially what is an armed insurrection and sedition against the federal government. You say this is just a part of a civil war that has been underway in the American West for the past 150 years. Can you tell us more?

ZINDA: I suggest in my piece that it’s no secret that the anti-public lands Western movement here is as a result of folks from Utah. Brigham Young and LDS people, when they came West, their intention was to develop the state of Deseret. They had fled New York and then from Illinois, and were persecuted by people in the East and were seeking asylum, if you will, or they were refugees of a different sense, and decided that they would head West in wagon carts and establish the state of Deseret, which would be their own. During that time period Brigham Young sent people into Mexico, into Arizona, to California, and even into Harney County where Ammon Bundy is now, to claim the state of Deseret for Utah.

So how does this, how does this get into LDS culture. The LDS culture is very protective of the state of Deseret. And from the beginning Brigham Young had suggested–I’m going to read a bit of a quote, if I may. “And in relation,” he says, “and when the Constitution of the United States hangs, as it were, upon a single thread, they will have to call the Mormon elders to save it from utter destruction, and they will step forward to do it.” And that was the Journal of Discourses, 2-1-82.

And so from the very beginning LDS people were taught to defend the Constitution as they saw it, and defend the state of Deseret. And backing up a bit, I would suggest that people read the book by John Krakauer, called Under the Banner of Heaven, whereby he speaks about LDS, or fringe groups of the LDS faith, and revelatory theology. Which–Joseph Smith had Mormonism revealed to him in New York. And at the time, Joseph Smith then suggested that everyone had the ability to speak with the Lord, and was to act accordingly. Later Joseph Smith and the apostles got rid of that doctrine and left it to the prophet.

However there are fringe groups, particularly here in southern Utah, and the FLDS people, the Fundamentalist Latter-day Saints in Colorado City, adhere to this question of revelation. That’s where Warren Jeffs comes in.

NOOR: And to be clear, Smith was the founder of the Church of Latter-day Saints.

ZINDA: That’s right, I’m sorry. Yes, that’s right. And so you know, Mr. Bundy and another fellow by the name of LaVoy Finicum, and Ammon Bundy himself, they all seem to be speaking with the Lord, and seem to be acting upon that. And they are indeed carrying out Brigham Young’s wishes, which is coming to the defense of the Constitution. And they, as LDS elders, are stepping forward.

NOOR: So I wanted to get your take on what the response of the authorities has been. We understand the FBI has been leading the response. They have called for a peaceful resolution to this, to this matter. But you know, compared to how, you know, black protesters, Black Lives Matter protesters, Native American protesters have been, who have had maybe somewhat similar demands over the past decades, have they been treated, which has been violent–you know, people have gone on social media and talked, you know, talked about what if armed Muslims had done a similar thing. You know, so I think it’s pretty clear there’s been a, a double standard in how these, these armed white men have been treated. Talk–put that in the context of how historically the federal government has responded to these demands and these armed actions they’ve carried out.

ZINDA: Sure enough. Well, I’m very sensitive to how law enforcement has responded to this event, and the former Bundy event, in comparison to Ferguson and Baltimore and other areas around the country. There’s no doubt there is a disparate treatment of individuals.

That said, I would suggest that this anti-public lands militia movement is, although is composed of predominantly white males, but it is also composed in part of former military and law enforcement individuals. For example, the Oath Keepers–who to their credit have not gone to Ammon Bundy’s aid, and that is a current split in the militia movement, as I see it. The Oath Keepers themselves recruit former military and law enforcement people, and current military and law enforcement to be part of their, their apparatchik. And the same is true for Richard Mack’s Constitutional Sheriffs and [Police] Officers Association. They too encourage particularly county sheriffs to enforce what they see as county home rule, or natural law. And so in turn, is it any wonder that law enforcement, even if they have a racial bias, were to be reticent at firing upon or, or, or even engaging people who may even be of their own, come from their own? [Sure] some of them may even be part of some of these organizations.

But that said, the federal government doesn’t want any kind of bloodshed. I mean, they certainly don’t want to see a massacre in any kind of form. And I think that they were right to be able to, to, cutting back at the April 14, or April 2014 Bundy affair. But they haven’t done anything since. They haven’t–we haven’t seen people be held accountable for their actions in 2014. And as a result of that Ammon Bundy himself, the militia leaders like Jon Ritzheimer and Blaine Cooper and others, they point to being emboldened by federal law enforcement inaction during the 2014 Bundy affair. And I think that they are, in turn are counting on that now, [at them] all here in Oregon.

NOOR: And I wanted to also ask you how this movement ties in with the John Birch Society, the Koch brothers, and other large agribusiness powers in that area.

ZINDA: As I suggested in my piece, there’s a long connection between Fred Koch and the LDS church. For example, Fred Koch was a founding member of the John Birch Society.

But if you flash forward to today, the John Birch Society four years ago had a split within it that–essentially it was an LDS-non LDS split, where a fellow by the name of John Fatheringham created a splinter group that carried forward with these John Birch Society kinds of ideas. And Mr. Fatheringham is LDS. So to this day, currently, the Koch foundation of course is interested in public lands because they wish to extract anything they can from it. They fund the American Legislative Exchange Council, through the Donors Trust, which in turn funds groups like the American Lands Council that is headed by another LDS fellow by the name of Ken Ivory. And in turn the American Lands Council is used as a platform for Utah state legislators and congressional members to forward anti-public lands legislation and return states–public lands to states.

On the flipside, the LDS church has substantial business interests in public lands. People need to understand the LDS church has a public and a private aspect to their operations. The private not-for-profit aspect is related to their church functions, and they’ve got a business aspect to them that is one of the largest corporations in the world. And because they are considered private they do not need to disclose financial statements. Bloomberg did a piece in 2012 that did a very good job at tying together the LDS moneyed interests, but suffice it to say they are the largest cattle operation in the United States. They hold agricultural interests throughout the West.

NOOR: And this is a church. This is a for-profit church, I think it’s important to emphasize. It’s not a nonprofit, as typical religious institutions are.

NOOR: All right. Chris Zinda, thanks so much for joining us.

ZINDA: Thank you very much.