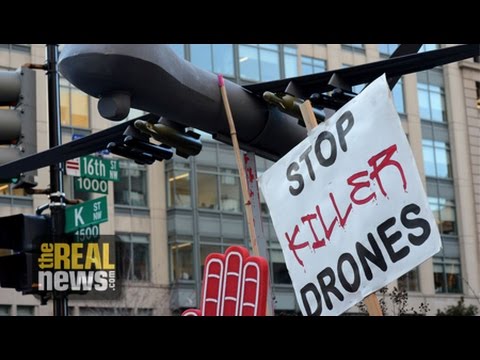 We’re continuing our conversation with Cian Westmoreland. He is a former drone war personnel and senior airman. He was in the United States Air Force from 2006-2010, and his unit assisted in 2,400 close air support missions and 200-plus enemy kills. However, the United Nations assistance mission in Afghanistan say that number included around 359 civilian deaths. Cian was a part of one of four former Air Force drone war personnel that went public and wrote a letter to President Obama. Thank you so much for joining us again, Cian.

DESVARIEUX: So Cian, let’s get into the details of this letter you wrote to President Obama. What specifically did you say, and what did you recommend the president do about his current drone program?

WESTMORELAND: Well, I don’t know if the letter itself went into too many specifics. But I think with this drone program, it’s not being met with an adequate enough peacebuilding effort.

We–while we’re waging war on these people, you know, with the instance of Iraq and the bombing of the sewage systems, and the water systems, people went without adequate utilities for a while. But how can we–how can we bring peace to this area? Because dropping bombs on people is not a way to achieve peace. It’s a way to achieve, you know, the desired stability that you want. But what is it that we can do aside from bombing people? How can we go into these countries and improve their livelihoods and take their, you know, take them out of the state of perpetual survival, either, you know, from direct threats or, you know, violence that’s imposed on them by corruption or–.

The food system, like in Egypt, one of the primary drivers behind the uprising there was the rising price of bread. And that was, that was caused by a grain shortage in 2008 for the–this is the Arab Spring. And when we look at that and we look at, like, what kind of, how are these societies structured, they’re more or less structured in the same way that we’ve had since the times of colonialism. And I think it’s, it’s important to understand things from that perspective, and it’s also important to understand, you know, that we have an obligation to these people to make their lives better than they were. I mean, you can’t make them better after we’ve killed some of their family members. I can tell you that life is definitely not better after a war. But as best we can for them, and better for future generations.

DESVARIEUX: But then let’s talk about what President Obama is planning on doing, because it doesn’t look like drone warfare is going anywhere anytime soon. Actually, instead the Air Force apparently is going to be giving out $125,000 bonuses to drone pilots who decide to essentially sign up for five more years and extend their contracts. So it really seems like we’re up against a Goliath here, Cian, if you were on the side of peace as you’re speaking of. So what can really be done to reverse this course?

WESTMORELAND: Well, I–I’m a bit pessimistic about drones themselves going away. I think they’re going to be everywhere. And there’s going to be a lot, a lot of different types of threats. I mean, I’m not sure if you’ve heard of the drone called Switchblade.

DESVARIEUX: No. What’s that?

WESTMORELAND: It’s ones that, it’s one that the Marines use, but it’s essentially like a guided missile. But you launch it like a plane, and it just runs straight into a target. Those are relatively easy to manufacture. And they could be used for multiple purposes. But primarily, you know, terrorist activities. I mean, you can get most of those chips on the open market. The materials that you would need, you can buy them illegally in just about every country.

So non-traceable, you know, drones or just robotic weapons systems. And this is in the next five to ten years. They’re already developing the technology right now. And it’s getting pretty close.

DESVARIEUX: Okay. So you don’t see there being any sort of change of course here. It’s just going to increase.

WESTMORELAND: No. It’s going to increase, and there’s going to be a lot of questions about how these things are being used. I’m saying we need to start thinking about this now instead of in ten years, and figure out how do we maintain democracies, how do we maintain, you know, people’s individual sovereignty when we have constant surveillance, when we have, you know, the ability to target any person on earth for anything. I mean, we might not have a socially progressive president, you know, in the future. What will the drone program look like under them?

And I think these are questions that the U.S. public needs to make–and they’re not, they need to ask these questions, and they also need to just reevaluate, you know, the things that go into their everyday life. I mean, they think these conflicts are so far away, but we’re fighting wars for influence over areas with large amounts of resources. I think we need to, we need to see how much of those resources we’re using in our own lives, where things are coming from, and try and make the supply chains more ethical overall.

DESVARIEUX: Okay. All right, Cian Westmoreland, thank you so much for joining us.

WESTMORELAND: Thank you for having me.

Cian Westmoreland served as a SrA in the United States Air Force from 2006 -2010.