From Drone Technician to Whistleblower 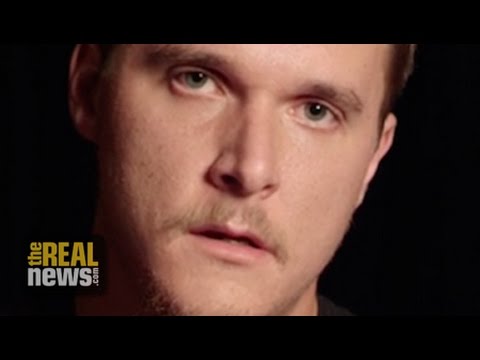 Four former Air Force drone war personnel went public with an open letter to President Obama. They are asking him to reconsider a program that killed, quote, innocent civilians, and which only fueled the feelings of hatred that ignited terrorism and groups like ISIS. Now joining us to tell his story is one of those drone war personnel, senior airman Cian Westmoreland. He was in the United States Air Force from 2006-2010, and his unit assisted in 2,400 close air support missions and 200-plus enemy kills. However, the United Nations assistance mission in Afghanistan says that this number included around 359 civilian deaths.

Thank you so much for joining us, Cian.

CIAN WESTMORELAND: Thank you for having me.

DESVARIEUX: So Cian, you enlist back in 2006 and eventually you make your way to Afghanistan. Can you just quickly explain, what exactly were you doing in Afghanistan, and how did it relate to drone warfare?

WESTMORELAND: Well, we were setting up a relay station for signals. So of course, the drones themselves don’t fly autonomously yet, so there needs to be a constant, you know, feed happening there. We took a lot of the, the imagery and the video feeds, and we sent–we brought them all through our site, and we sent them to the combined air operations center in [inaud.] and then to [inaud.].

DESVARIEUX: Okay. So you weren’t actually a drone pilot, but you were a part of, of this whole chain. So now–so you’re there, you’re working in Afghanistan. But obviously you have a change of heart, or at least you start questioning what you’re doing. What exactly triggered that for you?

WESTMORELAND: Well, I think, you know, there was a point in my life where I was religious, and I–I definitely felt strongly about the whole thou shalt not kill, you know, love your enemies, treat others as you would treat yourself. And all those things were kind of in conflict, for me, when I was in the military. I didn’t really know what conscientious objector status was, or how to go about getting it. But I thought, you know, I can’t, I can’t really let my, my team down.

So I went to Afghanistan and we, we built this system that enabled, you know, warfare at a distance. And I think the moment that I, that I realized that I was doing something pretty harmful, or what I was doing was–I actually had a mortar land relatively close to me. And that was quite jarring for me. You know, I was trying to find out what must be going on at the other end. I used to watch these kids outside the fence every day and they’d beg for water. And I’m, I’m just thinking, like, why do we need this sophisticated equipment just to, you know, control this area, or whatever?

But the day that my boss told us to come around to the equipment, and then he handed us a headset and said, you know, listen. We listened, and it was an [inaud.] speaking to a [battle] manager. He said, we’re killing bad guys now, boys. And I think just the, the combination of those two things really messed with me. I had traveled after the Air Force. I went through Georgia, I saw where the Russians had bombed Gori and went through Osh in Kyrgyzstan, and I saw where about 2,000 [Uzbeks] according to sources on the ground were massacred. And you know, there was rumors about the, the opium trade that was running through the area of Kyrgyzstan.

I guess if you put that together with the opium production, Afghanistan, and kind of see where this is going, you see that there’s like, there’s effects beyond the borders of Afghanistan. This war is affecting, you know, everybody’s life in that region. And I just–it was just a gradual, like, coming to the realization that I’m, you know, I’m partially responsible for all this.

DESVARIEUX: I hear you. And you found others that felt the same way. As I mentioned, four of you actually came out and wrote this open letter. So how did you end up finding these other drone war personnel?

WESTMORELAND: I found Brandon online. I was struggling with some things. I’d just spoken out, I did a university lecture about what I was doing at my university. And I just kind of went to a bad state of depression. And tried to find someone who might have an understanding of what I was going through. And I reached out to Brandon, and we started a–we, we had a conference around April 2013, where we showed the drone film for one of the first times in Europe. And yeah, I was up on the panel with him. And from then on, just kind of did networking different places, all over.

There’s a lot of veterans who regret what they do. Not all of them are drone veterans or technicians, or what have you. But there’s quite a sizeable community.

DESVARIEUX: Yeah. But Cian, I mean, there’s a lot of support for drone warfare here in America. I’m going to pull up this recent Pew Research poll. About 58 percent of Americans approve of missile strikes from drones to target extremists in such countries as Pakistan, Yemen, Somalia. So there’s a lot of public support. At least the majority, we can say, support this program because they feel that it protects pilots. And you know, what would you say to those people that say, you know, innocent civilians are going to be killed in war? That’s just the nasty part of war. What’s your response to that?

WESTMORELAND: I would say that, you know, that the argument they put forward, that innocent civilians die in war, that’s just what happens in war, it’s really prevalent but it’s also, it’s kind of just a cop-out. You know, you’re refusing to acknowledge the, the horror of war, and you’re dismissing it and saying that this is what happens anyways. I mean, in any case that should be the–one of the prime, you know, motivations for leadership is to mitigate civilian casualties. You definitely didn’t see that in the beginning of the war, and now drones themselves are being used as a foreign policy tool, just taking out alleged terrorists or conspirators. Just–in a precise way.

But there’s always going to be civilian casualties, because they’re wise enough to realize that they need to meet in places with high amounts of civilians.

DESVARIEUX: Yes. So it’s not as precise as we like to think it is.

WESTMORELAND: It’s precise in the sense that it hits the target. And you have a long loiter time. You know who you’re hitting. But the decisions that are being made, you know, to target a place with one high-profile target and, you know, about 30, say 30 associated people and their families, or something. I mean, it’s not–. It’s not necessarily the weapon itself that’s inaccurate. It’s the way it’s being used, and the fact that there’s no international laws that are actually governing, you know, how this thing should be used.

I mean–. So this is obviously not an American thing anymore. There’s about 55 countries in the world that are producing drone technology. And they’re all going to have their own agendas, and they’re all going to look at how the U.S. used these drones to go into countries that we’re not, or we haven’t formally declared war on. And they’ll use the same justifications. We’re setting the precedent internationally for how this technology is used, and I don’t think it has been used responsibly.

And I think it’s been, you know, way too experimental with a problem that is–you know, they’re throwing sparks at a powder keg. I mean, it’s not–.

DESVARIEUX: Okay. Let’s pause the conversation here, Cian, because I want to get more into the policy and talk specifically about what you wrote to President Obama in that letter. So Cian, thank you so much for joining us in part one of our talk with you about drone warfare.

Thank you for joining us on the Real News Network.

Cian Westmoreland served as a SrA in the United States Air Force from 2006 -2010.