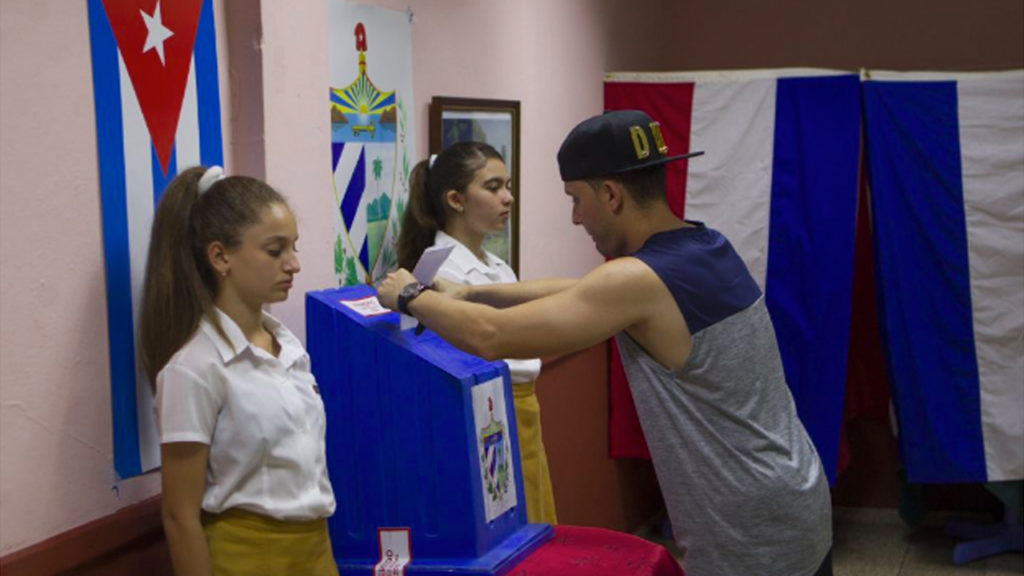 Last week, Cubans voted in a historic referendum to adopt a new constitution. It was approved with 86.9 percent of the vote, with a participation rate of 84.4 percent. The new constitution introduces a number of changes to Cuban economic and political life, such as the legalization of private productive property and of foreign investment, the creation of a new position of prime minister, the limiting of the president’s position to two five year terms, and an apparent strengthening of the rights to freedom of expression and of assembly. Many elements of the old 1976 constitution remain, such as the primacy of the Communist Party and the commitment to build socialism.

Joining me now to talk about Cuba’s new constitution is Professor Elizabeth Dore. She’s Professor Emeritus of Latin American studies at the University of Southampton and has a book coming out on Cuba published by Versa books called Cuban Lives. Thanks for joining us, Elizabeth.

ELIZABETH DORE: Thank you very much. Glad to join you always.

GREG WILPERT: So how do you interpret the result that 87 percent of those voting in favor of the new constitution voted for it following almost nine months of public consultations about the draft? What does it say about Cuba and its political system?

ELIZABETH DORE: Well, what I think, the whole thing about statistics, everybody crunches numbers and there’s always the old phrase “lies and damn statistics.” Basically, 75 percent of Cubans who were eligible to vote voted yes, that they supported this new constitution. That meant 25 percent either voted no, I think that was about 13 percent, or abstained or ruined their ballot or something like that. And so, I think what we’re seeing is a more real kind of referendum, election, whatever you want to call it, in Cuba. The last constitution in 1976 was passed by 99 percent of the electorate, and 98 percent of the people went to vote. And that’s the kind of election that you have under authoritarian governments where people feel they have no choice but to vote the way the state tells them to vote.

So I think this shows a softening of authoritarianism and people feeling more like they can either not bother to vote or they can vote no. And so, I think we’re seeing a sort of more real political dynamic in Cuba with this election, with this referendum.

GREG WILPERT: So let’s take a look at the changes of the constitution in three main areas, the economic, the social and the political. I want to start with the economic. As I mentioned in the introduction, the main change here seems to be perhaps the legalization of private productive property. What impact would this have, and are there any other important economic changes of note?

ELIZABETH DORE: I think the big changes are that a free market is seen as a legitimate part of a mixed economy in Cuba, still with state leadership, the state control over the major sectors of the economy, the private productive property will become legal within the new system, and the encouragement of private foreign investment. And I think that is sort of a pointer to change, a pointer that the Cuban state leadership in Cuba wants to move in the direction, slowly, gradually, but in the direction more of a mixed economy. So I think that’s quite an important marker. I’m not sure that’s the kind of marker that should be written up in a constitution. I think that constitutions generally should be about framing the political system and ideally defining the kind of democracy or the kind of democratic participation, the kind of democratic system.

GREG WILPERT: Now, with regard to the social, which actually you touched on already, but I want to get to some other issues, which is one of the most anticipated changes of legalizing same sex marriage did not happen, apparently because of strong objections from the Catholic Church. But discrimination on the basis of sexual orientation, gender identity, and age have been added to the list of prohibited forms of discrimination. Now, first, should we be surprised that the Catholic Church was able to stop the same sex marriage provision, considering that the Cuban government has always had a tense relationship with the Catholic Church? And second, the right to an abortion was given constitutional guarantee, which wasn’t there before. Couldn’t the church stop this? I mean, how do you explain these changes?

ELIZABETH DORE: Well, I think you’re absolutely right. The important issue–actually, I see it as a very worrying issue, a lot of Cubans see it as a very worrying issue, is that the churches, and it wasn’t predominantly the Catholic Church, it was predominantly the evangelical churches, they organized to oppose this provision in the constitution for same sex marriage, which wasn’t defined like that, it was that marriage was a legal union of two individuals, of two people, without defining that it had to be a man and a woman. And I think what’s very notable and very worrying there is that the churches, particularly the evangelical churches, have played such a role, such a relatively important role.

And if we go back in a little bit of history, not very far back in history, but the evangelical churches became–first of all, religion was legalized in Cuba, moving from the past constitution, which said that Cuba was an atheist state, to laws and provisions that said that religion would be tolerated and allowed. And then the evangelical churches that began to spring up in Cuba in the 1990s were mostly branches of U.S. churches, and they had funding from the United States. And so, there’s a mother congregation, when you ask where is the mother congregation of this church, people would tell me it’s in Los Angeles or in Las Vegas. And so, these were foreign. Entities that were gaining more and more adherents in Cuba.

In Cuba now, according to some expert surveys, the religion that has the most adherence are the whole range of Afro-Cuban religions, Santeria, Ifa, and others. The second most is evangelical churches, and the third is the Catholic religion. And so, this is not predominantly the Catholics, although there was some sort of–I’m not sure, alliance would probably be the wrong word, but unity of interests between the evangelicals and the Catholics. But it was predominantly a movement of the evangelicals, and they organized public demonstrations, which are very, very rare in Cuba, to have a public demonstration that is not organized by and authorized by the state, that’s uncommon. They organized.

The self-appointed leader of the evangelical churches has on his website, on his statements, loves President Bolsonaro in Brazil, not only for his anti-gay position, but for his crackdown on crime and his crackdown, wanting to militarize the society to eliminate crime. It’s very worrying, I think, and a lot of Cubans, as I said, are very worried that this opposition force, what we might have thought of in the past as an opposition force, wasn’t from evangelical churches that see Bolsonaro as some kind of model for them. So that is, I think, a worry for the future, a big worry for the future, that this might be an opposition that is gaining momentum in Cuba, and it doesn’t look good.

GREG WILPERT: Now, on the political front, the perhaps most important changes have to do with the creation of a prime minister post with term limits, and it seems with some greater political freedoms. Do you think that these changes will change the way Cuban political life is run?

ELIZABETH DORE: I think it’s too early to tell. I don’t know. I think that they’re institutionalizing–I think the timing of the constitution and the referendum were very important, when Raul Castro, in other words, the Castro brothers, are no longer directly ruling the political system, although Raul Castro is still the Secretary General of the Communist Party, but they’re no longer in the lead political position, the presidential role, and there is a generational change to Miguel Diaz-Canel. And I think that to have a constitution and a referendum about that is to try and institutionalize that generational change. So I think that’s the very–and to show Cubans, to show the world, that this new government in Cuba has support and it has institutionalization. So I think the timing has been carefully worked out.

Whether or not having a prime minister, I don’t know. We have to see who’s prime minister and how that job works out. In terms of five year terms, we knew about that a number of years ago because Raul Castro had announced that I think pretty soon after he became president.

GREG WILPERT: Right. OK, well we’re going to have to leave it there for now. I was speaking to Elizabeth Dore, Professor Emeritus of Latin American Studies at the University of Southampton in the UK, but she joins us from Brooklyn today. Thanks again, Elizabeth, for having joined us today.

ELIZABETH DORE: Thank you very much. Nice talking to you. Bye bye.

Elizabeth Dore is author of the forthcoming book We Are Not the Same Cubans We Were Before, Oral Histories of Life in Cuba (Verso Books). She headed Cuban Voices, the first large oral history project authorized by  the Cuban government since the 1970s. Cuban Voices was under the auspices of the Centro Nacional de Educación…