After months of debate, millions turned out in a historic vote on a new constitution for Cuba. The Real News Network was on the ground to hear from Cubans about the vote and the process, which marks a significant shift in the Caribbean nation.

After months of debate, millions turned out in a historic vote on a new constitution for Cuba. The Real News Network was on the ground to hear from Cubans about the vote and the process, which marks a significant shift in the Caribbean nation. 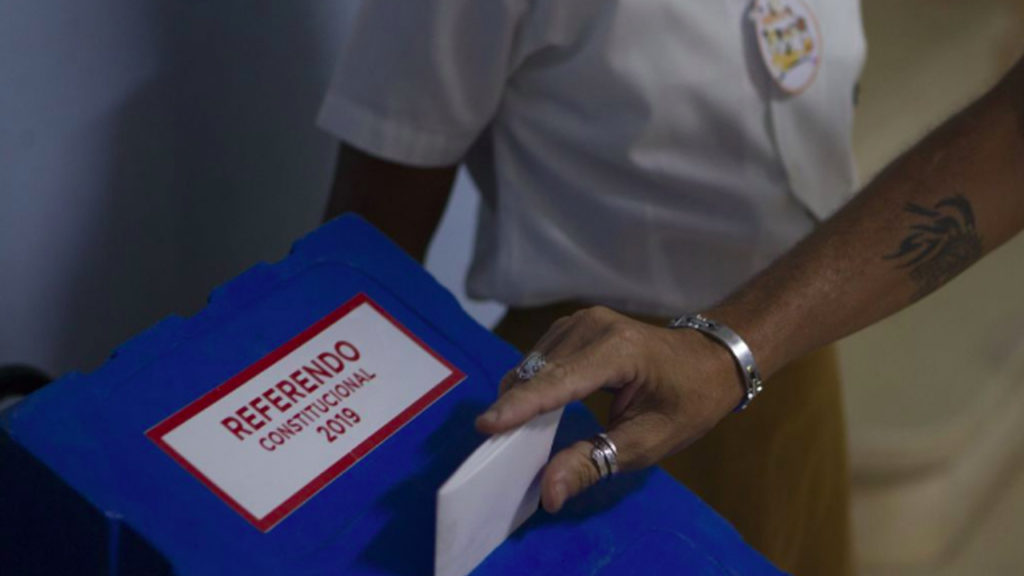 JOSE LUIS FAJARDO: Scenes like this one are what the Caribbean island of Cuba has become famous for. However, slowly, American automobiles from the first half of the 20th century and Ladas from the former Soviet Union have been giving way to European, as well as Korean and Chinese ones.

Perhaps less noticeable from a street view are the tremendous political changes in recent years. From the historic 2016 visit by U.S. President Barack Obama as part of efforts to normalize relations between the two countries to the death of revolutionary leader Fidel Castro just months later, the island has been undergoing deep transformations. 2018 saw the election of a new president named Miguel Diaz-Canel. His first major initiative has been seeing through a process to change the country’s constitution.

JOSE LUIS FAJARDO: In July, the National Assembly of People’s Power that Diaz-Canel now heads up approved the text for Cubans to vote on, with the February ratification vote being the culmination of a months long debate around the nation’s future.

FRANK: There was an immediate decision to undertake a popular consultation with all Cubans. That included, of course, all the workers and all the workplaces that it was carried out, as well as in the rest of the population, the residential areas, the various mass and political organizations in our society. To have everyone’s contribution to the final constitution presented would be the best version possible. And afterwards, it was once again submitted for debate among the legislators. And based on the feedback, nearly 63 percent of all the original proposals were changed.

JOSE LUIS FAJARDO: Almost 800,000 proposals were analyzed by parliamentarians, following a 130,000 local meetings in neighborhoods, workplaces and civil society organizations, among others.

SPEAKER: The process was really enriching. Lots of meetings, things on TV, lots of explanation, and above all, a lot of information to clarify for what and why, which is very important, to know why you would support a new constitution.

JOSE LUIS FAJARDO: Cuban lawmakers, who are also not professional politicians, but rather workers and representatives from society at large, finally adopted language that amounted to 750 changes to the 1976 constitution. These changes included issues ranging from the economy, to marriage, to term and age limits for Cuba’s top post.

VALKIRIA OJEDAS: There were many changes, some 700 or so changes from the 1976 constitution. And people expressed their opinions. And where there were the most conflicting views was on the issue of marriage.

JOSE LUIS FAJARDO: The definition of marriage dominated local debates. And despite efforts by government leaders to modify language in order to permit equal marriage, there was significant pushback during consultations. The new Constitution defers the definition to a law that will come up for review in the next two years. Though voting is not mandatory, turnout surpassed 84 percent, with over 90 percent approving the reform, according to officials. Despite little signs of a campaign against the proposal around the island, 700,000 Cubans voted no, a fact that some observers see evidences the political shifts underway.

ELIZABETH DORE: 75 percent of Cubans who were eligible to vote voted yes, that they supported this new constitution. That meant 25 percent either voted no, I think that was about 13 percent, or abstained, or ruined their ballot or something like that. And so, I think what we’re seeing is a more real kind of referendum, election, whatever you want to call it, in Cuba. People are feeling more like they can either not bother to vote or they can vote no. And so, I think we’re seeing a sort of more real political dynamic in Cuba.

JOSE LUIS FAJARDO: Others worry about the potential social impacts of deepening the economic reforms that started at the beginning of the decade. However, the ratification also showed the population’s support for the changes that been taking place, and the proposals to continue these.

RODOLFO ABRAM: Personally, as someone who is self-employed, certain parts have benefitted me. And I’ve seen that things have improved, and we’ll just have to keep working. For myself, and I think for all the self-employed, we have benefited.

JOSE LUIS FAJARDO: The referendum vote comes as Washington renews hostilities against Cuba and its allies in the region. The Trump administration has been pressing for regime change in Venezuela and has openly stated that it also has its sights set on Cuba as part of a campaign to curb socialism and purportedly to restore democracy across the hemisphere. Many were undeterred by the calls for boycott and escalating aggressions from Washington.

JOSE LUIS FAJARDO: The new constitution and the February 24 vote reflect the complex duality where Cubans want both change and continuity within the process they set off on 61 years ago. At various polls around Havana, Cubans from all walks of life spoke of hope for the future under the new constitution.

GRACIELA: There have been a lot of changes, but I think everything will be OK. Much strength to the Cuban people, and we have to keep moving forward because that’s what we want.