Retired FBI Agent: Russia Sanctions Moves the US Closer to Another Cold War 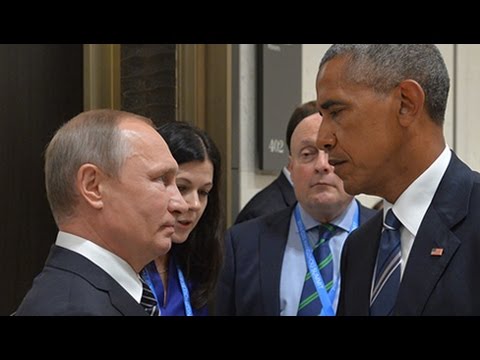 Russia has vowed to retaliate after President Barack Obama on Thursday, December 29th, ordered the expulsion of 35 Russian diplomats and sanctioned Russian intelligence officials who Washington believes were involved in hacking US political groups in the 2016 presidential election. The measures taken during the last days of Obama’s presidency mark a new low in US-Russian relations.

Obama is reportedly seeking to deter Russian and other foreign governments from leveraging cyber attacks in the future to meddle in US politics, former officials and cyber security experts said. However, thus far, no evidence has been made public linking Russia with the attacks. It’s being reported Obama has been under growing pressure from his own administration and lawmakers of both political parties to make such evidence public and to respond more forcefully to such cyber attacks, which include leaked emails from Democratic Party operatives that became part of the media coverage in the campaign for the presidential election.

Well, now joining us to discuss all this is Coleen Rowley. She’s a retired FBI agent, former division legal counsel and whistleblower. She jointly held the Time Person of the Year Award in 2002 with two other women, also credited as whistleblowers. Thanks so much for joining us.

COLEEN ROWLEY: Hi. Thanks for having me.

JAISAL NOOR: Just when you thought this year couldn’t throw us any more tricks or any kind of surprises, we have this major announcement. I wanted to get your response to it because, so far, there’s been no evidence made public, although reports today suggest such evidence will be released today. We just haven’t gotten it yet.

We wanted to get your response to that. There is agreement according to US officials that Russia sought to intervene in the election to help Trump. Trump has rejected that and Russia, of course, has denied it, as well.

COLEEN ROWLEY: Yeah. I think we need to — not only the public, but the media — everyone needs to actually really call for more evidence and then scrutinize the evidence. There’s more than one issue involved here. It’s not simply, was there some hacking going on? Of course, there’s some hacking going on. The United States also intercepts foreign communications. That’s the NSA’s job.

Okay, so already that show up some red flags for people. Of course, there can be people all over the world, including Russians, who are engaged in hacking. There certainly are many Americans, as well. But to connect that to a governmental action, directioned by a Russian intelligence agency — that’s the key thing here. And will they show evidence of that? That’s a good question. But if they don’t, someone should ask. I’m not sure today if anyone asked that question, but that is the number one key question.

The other question that is logical is how could that have possibly affected the American election since it was all just true emails. I mean, these were… no one disputes that these were authentic emails, and so what you have to be arguing is that the truth then, when American voters know the truth about some of their politicians and about some of their candidates and the shenanigans that go on during campaigns, if the American people know the truth of that, that somehow then is wrongful interference. They’re saying that the truth is wrongful interference.

So, again, I would just urge much more skepticism. We have not seen any evidence. There was one more tell-tale problem today when Obama announced sanctions. What did he do? He added a new wrinkle here. He said, “I’m not only sanctioning Russia for these latest hacks of the DNC. I’m also going back four years of harassment of our American diplomats.” Now, that’s something that no one had heard before, and he mentioned even assaults. It’s kind of an odd thing, because if there were things going on, you’d think that the American people would’ve learned about this.

I’m very suspicious. It seems to me very similar to the lead-up to the Iraq War and when they talked about the connection to 9/11, “Well, Saddam was behind 9/11,” which was obviously not true. That wasn’t strong enough, so then they had to add that Saddam had weapons of mass destruction. Eventually they said, “Oh, we’re just going in to ensure democracy in Iraq.” They kept adding things. It was like the kitchen sink of justifications for attacking Iraq. And there’s been just way too many Gulf of Tonkins and the sinking of the Maine and the Lusitania, on and on and on. Every time we start to see a new war started, you will see these exaggerations and lying into war, and I think that the American people really have to be skeptical. Almost 20 days before a new president takes office that now we have this–

COLEEN ROWLEY: It’s not ever easy to undo what a former president does. Certainly, Trump, and I think some of his advisors, might try to do that, because actually, one of the advisors I read about is Kissinger, and Kissinger is working on a détente agreement with Russia that would solve these conflicts that have occurred in Ukraine and Crimea. Henry Kissinger, at this late age, might be trying to redeem himself. Who knows? But that’s what I’ve heard — or read — that Kissinger is working on some major détente agreement with Russia.

So, of course, that may be in the cards. Unfortunately, I think what we have here is a very unholy alliance between the Democrats who are mad that Hillary Clinton lost. There’s a whole range of politicians — I won’t say the lower… it’s not the people, the Democratic Party people, but it is the politicians, the Congress. And they have an unholy alliance with some of the Republican warmongers, people like Lindsey Graham and John McCain, who have wanted to bomb Iran and have wanted… actually suggested war with Russia. And so they want to ratchet up a Cold War and actually in hopes of getting a Hot War, so those warmongers are aligned with the Democrats who want to blame the loss of the election on the Russians.

And I think that is a problem, and it will be somewhat difficult for Trump to undo, but he could do it. And I think a Cold War is just a serious mistake all the way around. It’s not only wrongful, it’s dangerous, with Russia, and it’s not going to help the American people at all if they have a Cold War going on.

JAISAL NOOR: Now, Coleen, some would say, look, Russia interfered with our elections. They crossed the line. Some action needs to be taken. What do you think… if you disagree that these sanctions are the right move, what is the appropriate response here?

COLEEN ROWLEY: Well, you know, first of all, the evidence needs to be shown, because the thing that’s missing here is who gave this information to WikiLeaks? That’s been totally absent. If there was hacking and surveillance, that’s exactly what our government does, as well. Our government is… (scoffs) intercepting communications all over Russia right now, including of their politicians. The difference here was that they allege, without evidence — so far, we have not seen it — that this evidence was given to be publicized to WikiLeaks.

You know, I would say if you wanted to have perfect, quote-unquote, “retaliation”, the United States should publicize embarrassing information that they might have intercepted on the part of the Russians. I’d have no problem if the United States wants to publicize embarrassing tidbits about Russian politicians. That would be the perfect retaliation — not what they’re doing, which are these sanctions. What they’re doing is they’re removing the normal international relationship that should exist between sovereign countries — and that is putting us on a road to war. When you say that your diplomats and your Russians have to be recalled, and then Russia will do the exact same for us — they’re going to probably turn around and say that American diplomats are persona non grata and have to return home — all we’re doing is basically shooting ourselves in the foot because now we’re creating greater distance, we’re creating this basically a return to the Cold War. And it’s not helpful.

So, again, Obama also intimated, which is very bizarre, that he would have a covert way of attacking Russia. Now, when have you ever seen a President hint or suggest they were going to start or launch a covert attack? That is beyond bizarre. If our country does anything covert, they don’t stand up and give a speech about it ahead of time. But that is exactly what Obama did, and it makes no sense at all — unless, in fact, the real agenda here is to start a new Cold War and you don’t care about the justification.

JAISAL NOOR: Well, it’s certainly going to be interesting to see what happens after Trump takes office, if this pushes him in a corner — and he will have access to all the evidence, so it’s going to certainly be interesting to keep following the story. Coleen Rowley, thanks so much for joining us.

Coleen Rowley is a retired FBI agent and former legal council for the FBI. She testified about the 9/11 lapses to the senate judiciary committee. She is known as a whistleblower due to her testimony to two congressional committees that led to an investigation of two FBI 9/11 failures.