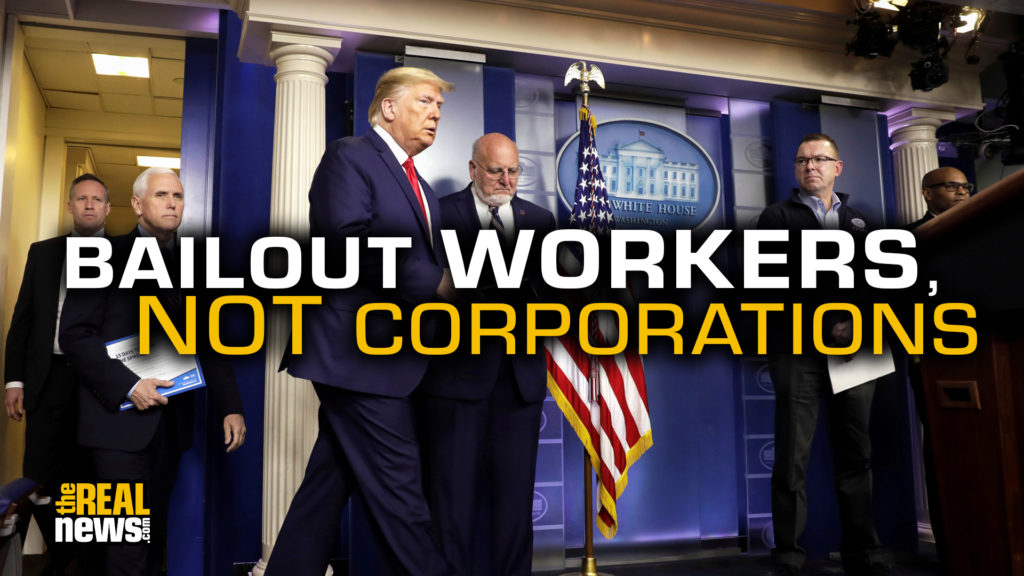 Jaisal Noor: Animation illustrates how social distancing can save lives during the coronavirus pandemic. The death toll from COVID-19 continues to rise with over 10,000 reported fatalities and close to a quarter of a million confirmed cases across 160 countries. That number could be far higher, especially in countries like the United States. The lack of available tests means there are potentially many more undetected cases and the government response has been slow, hampered by misinformation spread by President Donald Trump.

Donald Trump: We think we have it very well under control. We have very little problem in this country. Now the virus that we’re talking about having to do … A lot of people think that goes away in April with the heat. They’re politicizing it, and this is their new hoax. But we did something that’s been pretty amazing. We have 15 people in this massive country and because of the fact that we went early, we went early, we could have had a lot more than that.

Jaisal Noor: Trump has finally begun acknowledging the scope of the threat and mobilizing the country to deal with it.

Donald Trump: We need millions of masks, and all of that will be ordered. We need respirators. We need ventilators is a big thing.

Jaisal Noor: But on March 9th, he compared it to the common flu. He’s wrong. Coronavirus is novel, which means it’s never been seen before, so our bodies lack the ability to fight the symptoms, which can be deadly. Congress has passed a bill that mandates free testing, but experts say treatment must also be free, arguing that’s a model South Korea has used with notable success.

We recently spoke with Lisa Gilbert, vice president of legislative affairs for the nonprofit consumer advocacy group Public Citizen that’s called on the president to resign because he poses a “clear and present danger to the nation’s public health.”

Lisa Gilbert: I think this issue and the fear it’s justifiably engendering is pointing to our systematic underinvestment in our public health infrastructure for decades, and now that we are faced with a crisis, we don’t have the ability to quickly provide in a way that makes sense for the underinsured or just sort of across the board because of a lack of production of test kits or preparedness by our personnel. We don’t have the ability to give people what they need and so folks are panicking.

One really crystal clear, easy, straightforward thing to do is have the federal government foot the bill for both the tests and the treatment and take the confusion about what your insurance covers or doesn’t cover out of it. People have been calling for that solution. We think it makes a ton of sense both for this emergency and then also as a group that has long supported Medicare for All. It’s sort of a encapsulated, obvious example for why we’ve been calling for that.

Jaisal Noor: And some people have pointed to South Korea that had some success containing the virus, and their approach has been praised by some scientists and it may have sort of adopted this really aggressive testing. Can you talk about that at all, what their experience has been?

Lisa Gilbert: Yes. I think the places where success is being had either in getting ahead of the virus and understanding who has it or containing it and kind of coming out the other side like they’re seeing in Hong Kong, it’s really the places where they’ve been the most aggressive. The United States, we’re not used to taking action, taking our government seriously in that way and taking recommendations until they’re sort of mandates and the emergency has reached a higher level. So, we were not ahead of the curve. We did not take advantage of the time given to us by China’s containment and take early, quick measures to test aggressively and contain. Now, we’re working to catch up. I think we can, but it will take those kinds of aggressive measures now and take them happening quickly.

Jaisal Noor: Some people are calling for economic support as well for some of the workers that could be affected by this. There’s been different proposals put forth by Democrats and now in the House and now even some Republicans are saying, even Donald Trump has said, “Let’s make some direct cash payments.” What do you think is the most effective way to give aid to people that have lost their jobs, lost their businesses? And, obviously, a lot of employment is tied to healthcare in this country as well.

Lisa Gilbert: Absolutely. I think the congressional response has to be, and the White House response has to be comprehensive, has to take into account that everything that’s happening right now is hitting the U.S. economy incredibly hard. We are looking at needing probably a federal fiscal stimulus that exceeds the response that we had in 2008. That’s going to mean everything from helping big corporations, but now doing that kind of stimulus in a way that’s smart where it doesn’t entrench money for CEOs and shareholders, but, instead, actually helps businesses stay afloat and trickles down to the rest of the economy.

It’s going to take massive investment in the social safety net, emergency appropriations, so that we can surge medical supplies, so that we can help provide childcare for people, especially healthcare workers, and then, of course, paid sick leave and unemployment insurance to help people who are unable to go to work, whether they’re sick or not. The unemployment insurance should be extended to gig workers and the self-employed, which we have many more of than we’ve ever had before.

I think that the bottom line, and I do think that Congress is actually doing a very good job on this front, is that responses need to be comprehensive. There’s not sort of a single silver bullet where appropriated money should go. We need to cover the waters and grapple with all the different problems that we’re facing because of the pandemic.

Jaisal Noor: From what I was reading, what Congress had agreed to would exempt 80% of workers, any worker that works for a business that has over 500 employees. Isn’t that inadequate?

Lisa Gilbert: Yes, absolutely. Not to say that what they’ve passed thus far does everything that I just called for, but that the proposals are on the table for the second and the third packages. The first supplemental was mainly focused, that 8.3 billion, on aid going to the agencies, jump-starting the vaccine production or grants to figure out how to do that for public health organizations, things like that. And the paid leave extension was not adequate, but we’re seeing more of it, more in the Families First Act the House passed and, hopefully, still more in the third version of the supplemental that’s being discussed.

What we want to see and what has been proposed by both Leader Schumer and Speaker Pelosi is an increase in unemployment insurance, an increase in benefits in Medicaid, some states, and SNAP, ways to cancel student debt. The latest proposal really does kind of cover the waters of what we’re trying to do. And you’re right, it will be up to Congress to pass it, but I do think they have the right idea in terms of what’s been proposed.

Jaisal Noor: Finally, you talked about Medicare for All. Now the democratic debate, Joe Biden said, “Look at Italy. They have single payer and their healthcare system is failing.” And he said, “We can cover the needs right now without passing Medicare for All. It’s not addressing the current need.” How would you respond to that?

Lisa Gilbert: Yeah. I mean, I think, and this is … Yeah, Public Citizen don’t take positions on candidates, not to say that either candidate has it completely right. I think the thing that we want to see is not just sort of Medicare for All for this situation, which I think is kind of what we’re talking about right now. We need to cover, without prejudice, everyone and everything that we can because we’re in an emergency situation. I think the idea of eventually getting us to a system of true Medicare for All, expanded Medicare for All, is that we will already have that in place. We won’t have this situation where we’re worrying about it in the emergency moment. We’ll already have decided to cover care in the way that we clearly need right now.

Jaisal Noor: For The Real News, this is Jaisal Noor in Baltimore.