Crisis in the Democratic Republic of Congo(DRC) is not new. Since it gained independence in 1960 it has been ravaged by war, tyranny and international economic opportunism. Despite a promise from rebel leader Laurent Nkunda to support a UN backed ceasefire, the fighting has not stopped between Nkunda’s forces and the Congolese government. Congo is bordered by eight different countries and McClatchy journalist Shashank Bengali believes that "there is potential for this conflict to destabilize the whole region."

Crisis in the Democratic Republic of Congo(DRC) is not new. Since it gained independence in 1960 it has been ravaged by war, tyranny and international economic opportunism. Despite a promise from rebel leader Laurent Nkunda to support a UN backed ceasefire, the fighting has not stopped between Nkunda’s forces and the Congolese government. Congo is bordered by eight different countries and McClatchy journalist Shashank Bengali believes that "there is potential for this conflict to destabilize the whole region." 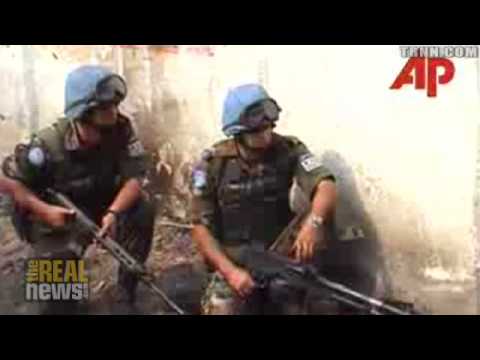 JORDAN GRANT, REAL NEWS MEMBER: It’s a whole bunch of one-persons that make a difference. If enough individuals do make their small monthly donation, that can make for a sustainable network.

ZAA NKWETA, TRNN: Crisis in the Democratic Republic of Congo is not new. Since it gained independence in 1960, it has been ravaged by war, tyranny, and international economic opportunism. Despite a promise from rebel leader Laurent Nkunda to support a UN-backed ceasefire, the fighting has not stopped between Nkunda’s forces and the Congolese government. I spoke to McClatchy journalist Shashank Bengali in Nairobi, Kenya.

SHASHANK BENGALI, MCCLATCHY CORRESPONDENT: The Congolese government really doesn’t exist as you and I would think of a government existing in the Western world. I mean, they had their first free elections in more than 40 years back in 2006, and they elected a young man named Joseph Kabila, and he was the son of the previous president of Congo. He’s really been unable to gain control of the country. Congo is a huge, huge place, basically the size of Western Europe. It has very few paved roads; it has little infrastructure. It’s basically a series of provinces that are ruled by local authorities. The Congolese central government is quite weak, and their military is very poorly paid. The government, despite having a lot of mineral riches and findings in gold and other minerals, they have not been paying their military, and so these troops, Congolese soldiers, are often blamed for going on rampages and looting villages, attacking civilians, and they’re hated by the population. The civilians in Congo didn’t see their soldiers as people who can protect them. The UN force is the biggest in the world. They have 17,000 troops set up there, again, spread over a gigantic area the size of Western Europe. And, actually, in the epicenter of the conflict right now, which is the province of Nord-Kivu, where the fighting is really happening now, there are only several hundred troops. And so you can’t really expect these troops to cover a huge area—they can’t be in every place at once. Now there’s a proposal to add 3,000 more peacekeepers, UN peacekeepers, but those wouldn’t arrive for at least two more months. But it’s not even clear what they would do. The UN freely admits that they can’t be everywhere at once. They don’t have a mandate to really disarm these groups. They have a mandate to try to monitor a ceasefire to keep these two fighting forces apart from each other. But at this point they’re out-manned, they’re out-gunned, and they just have no chance of stopping very well-trained and well-equipped rebel armies. Difficult conditions for civilians. There’s about a million people displaced in Nord-Kivu out of the population of six million. So one in six people, basically, in this province are living in refugee camps. Many of them are living just, you know, in the forest, in the bush, to try to avoid getting caught in the crossfire. And because they’re living away from refugee camps, and because even those refugee camps are located in such difficult terrain—you know, mountainous area; it’s very hilly; there’s no roads in the area—the relief agencies can’t get food and relief supplies to them. So the humanitarian situation’s incredibly dire. And every time there’s a skirmish, every time Nkunda’s forces or the Congolese forces fire weapons at each other, thousands of people go running. And until the fighting stops, these people are going to be completely out of reach for the aid agencies to get help for them. There’s been a lot of diplomatic talk, a lot of appeals for peace. But the problem is everyone in Africa I think realizes the Congo, because it borders eight different countries, there’s a potential for this conflict to destabilize the whole region. Congo’s already fought a civil war from 1998 until 2003 that killed, some people say, maybe as many as 4 million people due to disease and to conflict. There’s a sense that this could happen again.

Shashank Bengali reports for McClatchy from more than 25 countries and covered conflicts in Somalia, Sudan, Lebanon, Iraq and Georgia. Before moving to Africa in 2005, he was a roving correspondent for The Kansas City Star. Originally from the Los Angeles area, Shashank studied at the University of Southern California and at Harvard University, where…