The crisis in Congo shows no signs of slowing down, as government forces continue to battle rebel groups loyal to renegade General Laurent Nkunda. Investigative journalist and author Wayne Madsen, of "The Wayne Madsen Report," believes that Congo "has fallen prey to a lot of people that want to loot its natural resources."

The crisis in Congo shows no signs of slowing down, as government forces continue to battle rebel groups loyal to renegade General Laurent Nkunda. Investigative journalist and author Wayne Madsen, of "The Wayne Madsen Report," believes that Congo "has fallen prey to a lot of people that want to loot its natural resources."

The Destabilization of Congo 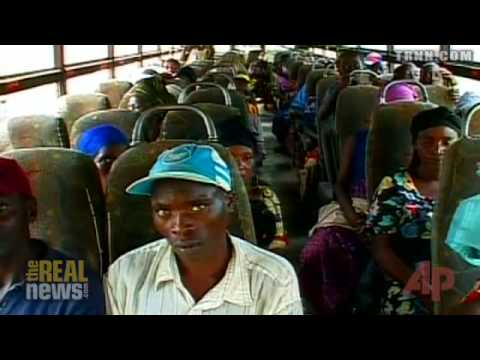 ZAA NKWETA, TRNN: With tensions in the Democratic Republic of Congo showing no signs of slowing down, The Real News decided to take a look at the conflict and the underlying causes behind it. I had a chance to speak to investigative journalist and author Wayne Madsen about what exactly is going on in the region. Here’s Part 1 of our discussion.

WAYNE MADSEN, INVESTIGATIVE JOURNALIST AND AUTHOR: Well, the Congo has a very tortured history, mostly because Belgium, the former colonial power, didn’t really do with Congo as France and Britain did with many of its colonies: it left hardly any type of educated Congolese population ready to take power; there was really no governmental infrastructure available when Congo became independent. Therefore it fell prey, during the Cold War, to the rival Western and Soviet Bloc countries, and its rich resources—its uranium, its gold, its diamonds, its platinum, and more recently something called columbite-tantalite, coltan, which is used in small electronic devices like Blackberries and cellphones—Congo has just fallen prey to a lot of people who want to basically loot its natural resources. So with all that said, Congo is a real playing ground for unscrupulous multinational corporations that are linked to various intelligence agencies. In eastern Congo, there’s a large Tutsi population which has always wanted to break away from the Congo and very much allied to the present government of Rwanda, which came to power because a plane carrying the Hutu—the majority Hutus in both Rwanda and Burundi—a plane carrying the Hutu presidents of both those nations, Rwanda and Burundi, was shot down by forces under the command of the present pro-US president of Rwanda, Paul Kagame. Paul Kagame has been an ally of both Bill Clinton and the George W. Bush administration. He’s our guy. He’s also allied to another US client to his north, where he spent a lot of time in his life, Uganda, President Museveni. So what we have are US clients, basically, at the root of the problems in the Congo. Kagami’s forces launched two invasions of Congo, once to depose our former client who became basically our throwaway dictator, Mobutu, and he was replaced by a man named Laurent-Désiré Kabila. Now, Kabila was in turn assassinated when he decided he was going to be more of a nationalist than a puppet of the United States. He was assassinated and replaced by Joseph Kabila, whose had a love-hate relationship with the Tutsis in Rwanda and the allies, the Rwandan allies in Uganda. Now there’s an attempt by a man named General Laurent Nkunda, who’s basically a puppet of Kagami, our guy in Rwanda, who’s trying to take over eastern Congo so that all these vast resources can be looted by, primarily, US, British, and Israeli multinational companies. It’s much easier to loot a country when it has a destabilized government and various warring factions: you don’t have to deal with one central government; you can deal with whatever warlord is controlling whatever diamond or gold mine you’re trying to exploit. And Congo is certainly a classic case of this. George W. Bush’s first assistant secretary of state for African affairs, a man named Walter Kansteiner, actually wrote a paper when he worked for Brent Scowcroft, the former national security adviser under father Bush, and also under Gerald Ford. Kansteiner basically wrote a paper that called for the Balkanization of Congo, its division into separate ethnic republics, that even suggested one way to achieve that would be through forced migration. Well, that’s exactly what we’re seeing playing out, where the Tutsis are forcing out the native Congolese and some of the refugees, Hutu refugees who came from Rwanda and also to a lesser extent from Burundi. They’re being forced to migrate because they’re being killed by these forces loyal to our man, Kagami, in Rwanda. Now, Kansteiner replaced a person in the Clinton administration named Susan Rice, who has just been named by Barack Obama to be the US ambassador to the UN. Susan Rice is a strong proponent of these clients like Kagami and Museveni—Kagami in Rwanda, Museveni in Uganda. She does not favor multi-party government; she favors strong dictators because her godmother, Madeleine Albright, chose Mr. Kagami and Mr. Museveni and also Kabila before we broke with him in Congo. She called these dictators America’s beacons of hope for Africa. Well, they’re not beacons of hope. They’re thugs. They’re dictators. But they happen to give the United States everything the US wants as far as the military presence in Africa, and also access to raw materials.

Wayne Madsen is a Washington, D.C.-based investigative journalist, author, and syndicated columnist. His articles have appeared in The Village Voice, Wired, and CounterPunch. Madsen was a Senior Fellow of the Electronic Privacy Information Center. He was a communications security analyst with the National Security Agency in the 1980s, and an intelligence officer in the US…