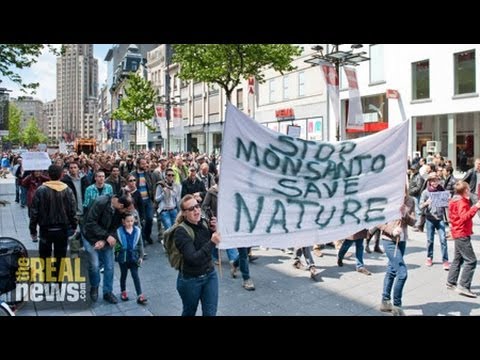 On Tuesday, the House of Representatives released a bill to extend the agricultural spending bill known as the “Monsanto protection act”. This bill allows Monsanto to continue to sell their crops even if a federal court deems it illegal.

With us to discuss the controversial bill is Colin O’Neil. He’s the director of government affairs at the Center for Food Safety, a national organization founded to protect human health and the environment.

Thanks for joining us, Colin.

COLIN O’NEIL, DIRECTOR OF GOVERNMENT AFFAIRS, CENTER FOR FOOD SAFETY: Thanks for having me.

DESVARIEUX: So, Colin, can you just break down for us what exactly is in this bill? And can you speak specifically to how this bill protects Monsanto?

O’NEIL: Sure. So, as your listeners and viewers may remember, last spring, Congress was debating a short-term six-month spending bill basically to keep the federal lights on. But one of the more contentious aspects of that bill was a policy rider that was tacked on secretly behind closed doors that has been dubbed the “Monsanto protection act”. This policy rider would strip federal courts of their ability to halt the sale and planting of a genetically engineered crop even if a federal court has deemed that that crop was approved unlawfully.

Generally, genetically engineered crops are, you know, crops that have been engineered in some way, and most of them have been engineered to either produce a pesticide or to be resistant to an herbicide. So these are quite ubiquitous amongst the major commodity props. However, they carry a number of pretty serious environmental, human health, and economic harms.

DESVARIEUX: How will this affect farmers? I know there’s a case going on right now in the federal courts with farmers who are suing Monsanto.

O’NEIL: M’hm. Yeah. One of the major threats from genetically engineered crops is the threat of transgenic or genetic contamination. Say you are a farmer that grows organic corn or organic soy. If your crops have been contaminated by a genetically engineered version, that may mean that you won’t be able to sell your products to GE-sensitive domestic or export markets. So there’s a direct financial burden on organic interventional growers if they have any type of contamination found.

This past summer, a farmer in Oregon found a rogue GE wheat growing in his field. GE wheat is unapproved here in the U.S. and has been widely rejected by our foreign buyers. And as a result of that finding, Japan and South Korea shut off imports of U.S. wheat for a short period of time, and now they’re requiring testing.

So, obviously, transgenic contamination is a very serious threat and one that federal courts have recognized as a serious harm. Unfortunately, this rider really seeks to circumvent the federal courts and even the USDA and put the power in the hands of the corporations.

DESVARIEUX: Why should people really care about this issue? If you look at those that argue for genetically modified foods, they say that you actually have a greater yield. And isn’t that something we should be to striving for, considering climate change? What do you make of those types of arguments?

O’NEIL: Well, there are really two points I’d like to make. First is that we actually have never seen any commercial genetically engineered crop that has been drought resistant or drought tolerant or had higher yields than conventional counterparts. A great report released by the Union of Concerned Scientists called Failure to Yield showed that all of the major benefits that we’ve ever seen from genetic engineering actually came from conventional breeding.

And what they did, the companies on the back end did was genetically engineer those crops to be resistant to an herbicide or to produce a pesticide. An overwhelming majority of the GE crops on the marketplace are designed for that purpose, to produce more pesticides.

But that’s beyond the fact that this rider is really unnecessary. The U.S. Department of Agriculture is the expert in regulating genetically engineered crops. We should be relying on the USDA and then our federal courts, who uphold the laws and hold USDA accountable, to be the ones that make the decisions about what GE crops should be approved and how they’re approved.

This policy rider is very dangerous, because it is an unprecedented overreach of the judicial powers that we have and, as I mentioned, puts the power really into the hands of the industry. And that’s very concerning for members of Congress and for many farmers and consumers as well.

DESVARIEUX: We’ll certainly be tracking this bill. Thank you very much for joining us, Colin.

Be a Winner and Support The Real News!